The great mince pie taste test! FEMAIL tries out ten festive pastries in a bid to find the best supermarket offering – so which came out on top (and which one got a pitiful 1.88 stars?)

It’s the time of the year when supermarket shelves are packed floor to ceiling with a dizzying array of mince pie varieties.

But with even budget brands now selling luxury all-butter pastries filled with vinefruit, cognac and port, how can you tell the Christmas hits from the festive flops?

This year, FEMAIL has done the leg work for you by trying not one, but ten different mince pies from leading supermarket brands in a completely blind taste test.

Twelve writers sampled the full range of festive pastries and gave each one a score out of five – and they didn’t hold back, describing some of the less popular samples as as ‘cloying’, ‘claggy’ and ‘forgettable’.

So can you guess which one boasted a ‘melt-in-the-mouth’ casing and which one left a bitter taste in the mouth? Read on to discover the winners and losers of our great mince pie taste test… 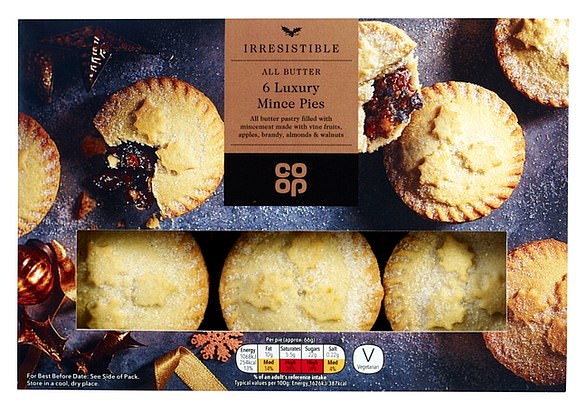 All butter pastry cases filled with mincemeat, packed full of juicy vinefruit, almonds, cherries, brandy and port – but how did Co-op’s mince pies fare in our taste test?

. ‘The filling had a nice amount of spice and the pastry case was buttery and crumbly, almost too crumbly in fact, as it shattered into pieces at first bite – potentially messy if you’re eating them slumped on the sofa in front of the TV, rather than off a plate’ – Kerry McDermott

. ‘Liked the pastry and the texture of the mincemeat… but the flavour was a little too subtle’ – Jo Tweedy

. ‘This mince pie was overly sugary and you could feel the grains of sugar on your teeth. It wouldn’t be overly tasty when paired with any traditional sauces‘ – Latoya Gayle

. ‘It had fluffy pastry and sweet filling. Couldn’t eat too many of these‘ – Lisa Quick

. ‘The mincemeat is very mild, although bizarrely a bit tangy. And the pastry doesn’t taste of an awful lot either. OK if you want something lighter‘ – Siofra Brennan

. ‘I smelled it before it got to my mouth. It was a little sweeter than I would like as I prefer a spicy kick. A good solid pastry. Perhaps a good one for the mince pie shy‘ – Martha Cliff 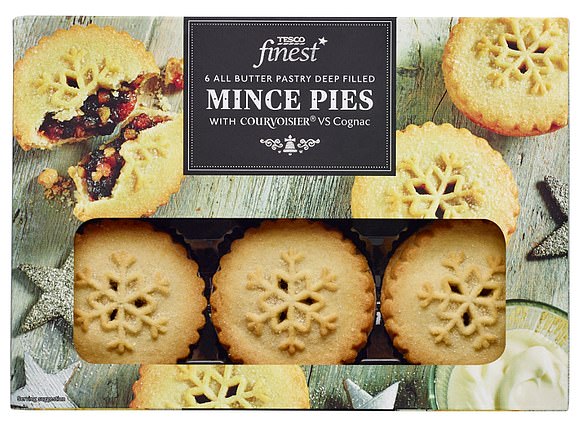 All butter pastry cases filled with mincemeat containing nuts and infused with Courvoisier VS Cognac and port – so what did our tastemakers think of Tesco’s offering?

. ‘A festive fail for me, the pastry was pleasant enough but the filling didn’t taste spicy and warm like a mince pie should, but sweet and overly tangy – almost marmalade like’ – Kerry McDermott

. ‘This pie had a good balance between the flavour of the pastry and the mince filling but could’ve been a little sweeter‘ – Latoya Gayle

. ‘A chewy pie but a very decent amount of filling however pastry was a little flat for me‘ – Martha Cliff 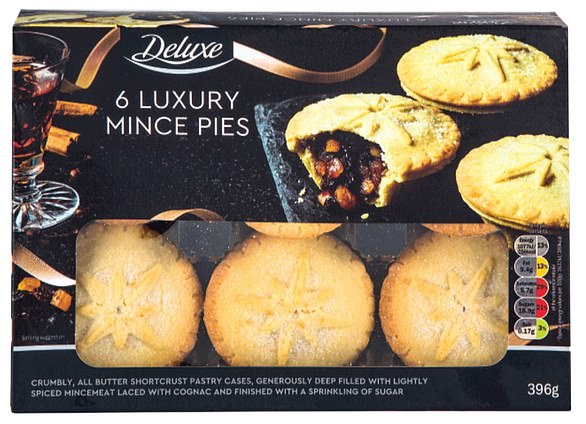 Lidl’s crumbly, all butter shortcrust pastry cases, generously deep-filled with lightly spiced mincemeat laced with cognac and finished with a sprinkling of sugar

. ‘This one was very sugary, enough to set my teeth on edge, and pastry was a little crunchy’ – Martha Cliff

. ‘This pie tastes great but is too crumbly’ – Latoya Gayle

. ‘The pastry on this pie was a little on the dense and thick side for me – I prefer a thin, crisp, buttery casing with ample filling. The pastry was also very sweet, which didn’t help when there was so much of it‘ – Kerry McDermott

. ‘The filling is nicely rich and boozy, which is always a treat! And the pastry is firm but nicely crumbly‘ – Siofra Brennan 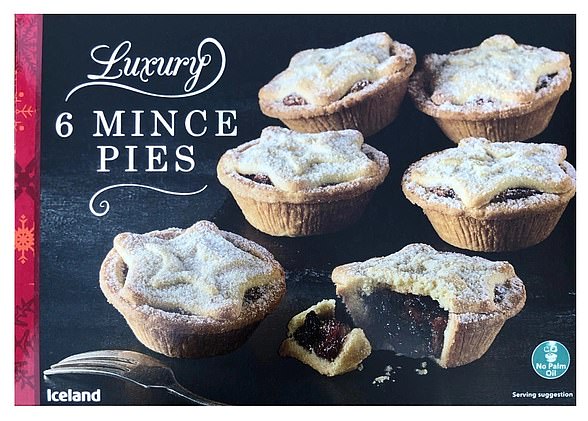 All butter shortcrust pastry mince pies filled with a fruity mincemeat containing vine fruits and brandy. Iceland’s award winning Luxury Mince Pies, redeveloped for Christmas 2018 to contain no palm oil, are to be sold in Selfridges stores this year

. ‘Really buttery pastry and rich tasty filling which they weren’t stingy on either! Nice dusting of sugar on the top too. I’m not usually a fan of shop bought mince pies but I would definitely buy these‘ – Hannah Eichler

. ‘The pastry of the pie is nice and doesn’t make too much of a crumbly mess but the filling has a strange salty taste’ – Latoya Gayle

. ‘Filling is very juicy but then doesn’t actually taste very distinctive. Pastry is nice and solid but again nothing special’ – Siofra Brennan

. ‘This one looked good, and tasted better. The pastry had a nice crisp consistency, and the filling was fruity without being over-powering. A crowd pleaser’ – Kerry McDermott 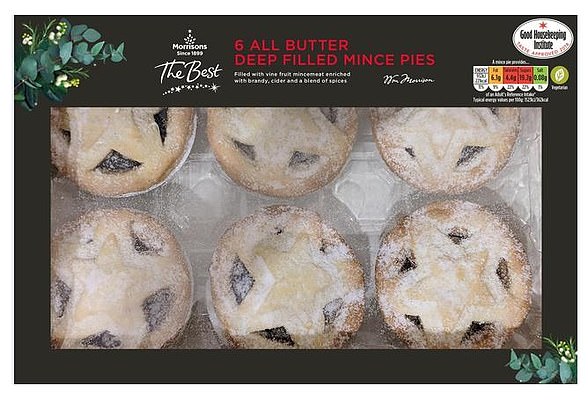 . ‘I found the filling of this pie slightly too sweet, but the pastry had a good level of crumble although not as buttery as previous pies! It was well filled‘ – Hannah Eichler

. ‘This pie is moreish with a hearty pastry and sweet blend of ingredients for the filling‘ – Latoya Gayle

. ‘Filling is light but quite boozy and works well against quite a delicate pastry. Think this is my favourite so far‘ – Siofra Brennan

. ‘It’s only gone and got a 5 out of 5!! Loved it. Light taste and nice after taste too. I would even consider buying some’ – Lisa Quick

. ‘I found the filling a bit bland in this pie, and the pastry crust was straying into doughy territory. Forgettable’ – Kerry McDermott 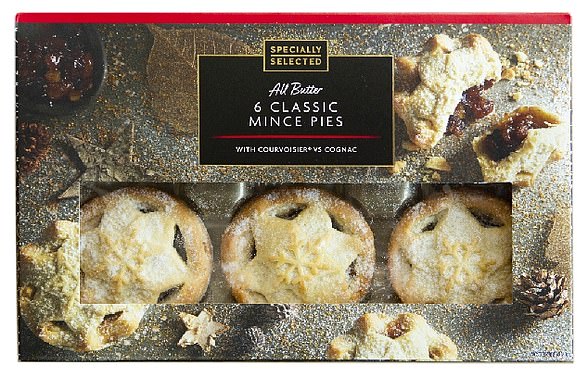 Classic mince pies with a jolly star-shaped pastry lid, these have a delicious mix of festive mince and are laced with Courvoisier Cognac – but how did they fare?

. ‘The chunks of filling in this pie are a bit too large for me but the pastry is ok‘ – Latoya Gayle

. ‘The pastry was a little soggy on this one and definitely too sweet. The filling was lovely and rich tasting though‘ – Hannah Eichler

. ‘Tastes a lot of orange, so good if you’re after something a bit more modern‘ – Siofra Brennan

. ‘The stand-out aspect to this mince pie was its lovely, crumbly pastry. The filling was good too’ – Kerry McDermott 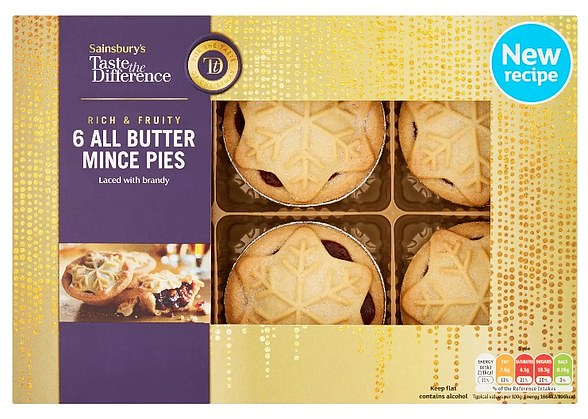 These ‘melt in the mouth’ all butter mince pies are packed with a festive blend of luscious vine fruit, cranberries and clementine juice, infused with a generous nip of brandy. Baked in the Scottish Highlands by shortbread specialists Walkers

. ‘Weird spices and quite lumpy but had a nice orange taste‘

. ‘With its festive star pastry decoration, this was one of the prettier mince pies but sadly it looked better than it tasted. The pastry was a little on the dry side and the filling was too orange-y for my liking‘ – Unity Blott 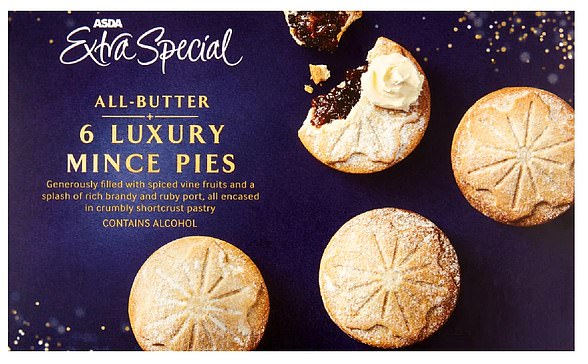 . ‘The shortcrust pastry was a little on the crispy side for my liking, although the slight alcoholic kick was its saving grace for me‘ – Unity Blott 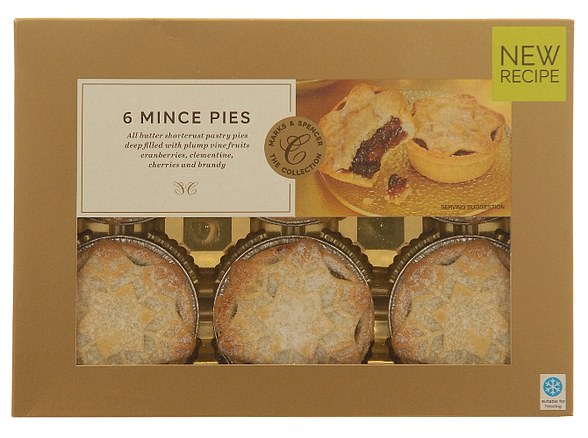 . ‘Quite a tangy citrus flavour which I loved, pastry was nice and crumbly too’ – Hannah Eichler

. ‘The filling was rich, citrusy and juicy’ – Siofra Brennan

. ‘Very fruity, if not too many currants for my liking but the pastry was nice and sweet’ – Natalie Corner 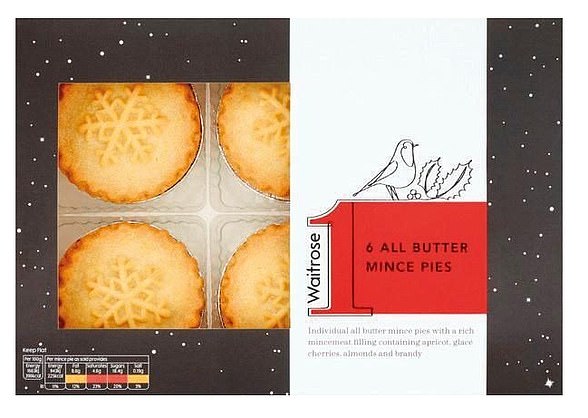 Individual all butter mince pies with a rich mincemeat filling containing apricot, glacé cherries, almonds and brandy – but how did Waitrose’s mince pies do in our test?

. ‘Chalky pastry and filling has no fruitiness, too bland‘ – Kerry McDermott

. ‘Pastry didn’t taste of much and filling was underwhelming. And very chewy raisins‘ – Siofra Brennan

And the winner is…

Marks & Spencer’s £2.50 Collection mince pies were the clear winner, but at £2.50 they’re at the pricier end of the scale. A surprise winner was Iceland, which came in third place with 3.25 stars. Down at the bottom were Tesco and Asda, with a pitiful 1.88 stars overall.