The psychological impact of the coronavirus pandemic is becoming so severe that people on mental health plans which are running out risk facing serious conditions with inadequate support.

Psychologists estimate about half of their clients require more sessions than the 10 subsidised on Medicare mental health plans and that nearly two-thirds had their mental health impacted by social distancing, their physical health or the economic effects of COVID-19. 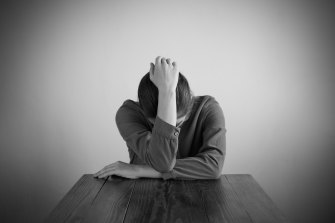 Beyond Blue chief executive Georgie Harman said the pandemic is "profoundly affecting people who live with mental health conditions and people who have never struggled before".

Beyond Blue will release comprehensive July data next week but said calls from Victoria to its support services doubled in the first two weeks of July and accounted for almost half of all calls received nationwide in the first week.

According to the Australian Psychological Society, some people on mental health plans have begun "staggering" their appointments to try to stretch them out to cover the pandemic period but this could also leave clients at risk.

The COVID-19 pandemic is profoundly affecting people who live with mental health conditions, and people who have never struggled before.

The society's president, Ros Knight, says demand for psychological support is "extraordinary" and "as the year goes on everybody's running out [of resilience]; we're more anxious, stressed and irritable, particularly in Victoria."

The society represent Australia's 24,000 psychologists and a survey of its members found more than 90 per cent would like access to telehealth via Medicare item numbers to be extended beyond the current September expiry date to allow them to keep caring for clients.

Ms Knight, a clinical and counselling psychologist, said people were feeling so worn down by the pandemic "we have most assuredly seen an uptick in the number of cases [of depression and anxiety] and it's just starting to explode. We expect it to get worse across the year."

As a practicing psychologist, she said "the number of clients coming back to me this year, that I haven't seen for say a couple of years or longer, is just amazing".

"It's in the 'extraordinary' camp. Initially there was a lull while everybody was getting used to telehealth, but to have the pandemic back onto the bushfires as well, this hasn't been a low-stress year in anybody's calendar," said Ms Knight.

The APS has already called on the federal government to extend telehealth and boost the number of sessions available for Medicare subsidy from 10 to 20, or more for people suffering from acute mental health conditions.

Ms Knight said although the government has stated it has not seen statistics indicating people's mental health plans are running out yet, "I would note there is a couple of months delay on the statistics they get".

Spacing out sessions to try to make the subsidised package last longer "is not good clinical practice" and "people who need to see you weekly are just not getting that consistency" and she said this was a national problem.

"It's much worse this year, in particular for Victoria, but let's not pretend NSW and Queensland are out of the woods yet. There is no sense that by the end of the year we expect everything to be rosy and people not to need to see us," she said.

A spokesman for the Department of Health said the government recognises the significant impact the pandemic is having on the mental health and wellbeing of Australians, "particularly those in areas affected by the recent outbreaks in Victoria".

Between January 1 and July 30, 2020, more than 850,000 mental health treatment plan Medicare items were accessed nationally, compared with 838,000 in the same period last year.

Ms Knight said she expected that Health Minister Greg Hunt would soon make a statement on whether telehealth would be extended and treatment plan entitlements increased.

If you or anyone you know needs support call Lifeline on 131 114, or Beyond Blue's coronavirus mental wellbeing support service on 1800 512 348.