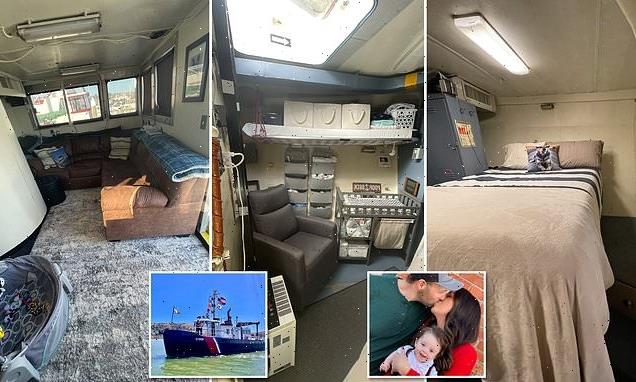 Couple who spent $50,000 transforming an ex-military TUGBOAT into a floating family home reveal they’ve faced criticism from people who say it’s ‘not a safe place’ to raise their eight-month-old son

This family are cruising through life on their 65ft decommissioned tugboat.

Jason Loger, 35, bought the former military vessel for $35,000 in early 2019, while on his second date with his girlfriend Taryn Collins.

After a year of dating, the couple moved into the boat and spent $20,000 on basic maintenance and another $30,000 refurbishing it to turn it into their dream home, which is moored in Benicia, California.

The vessel is now home to Taryn and Jason, their two dogs and their eight-month-old son, Russell. The couple converted the crew’s quarters into the master room and the officer in charges’ room into the nursery for Russell.

While they are sure the boat is safe for Russell, after posting their incredible life on TikTok, Taryn has had to defend their boat life from trolls who comment on the safety of their son. 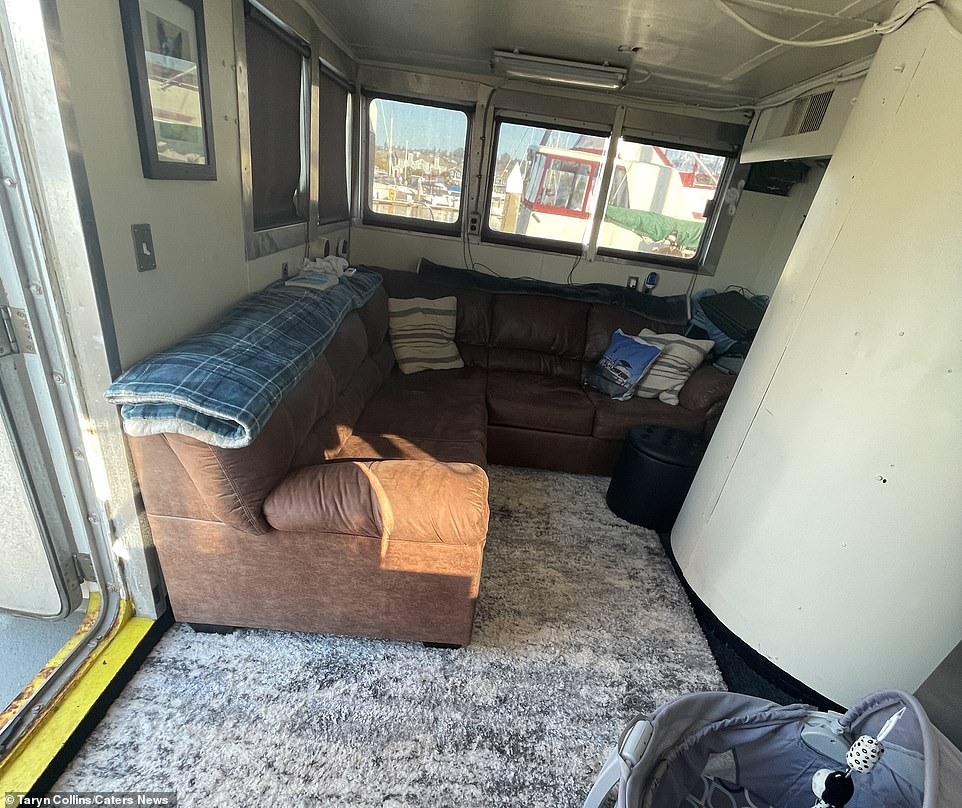 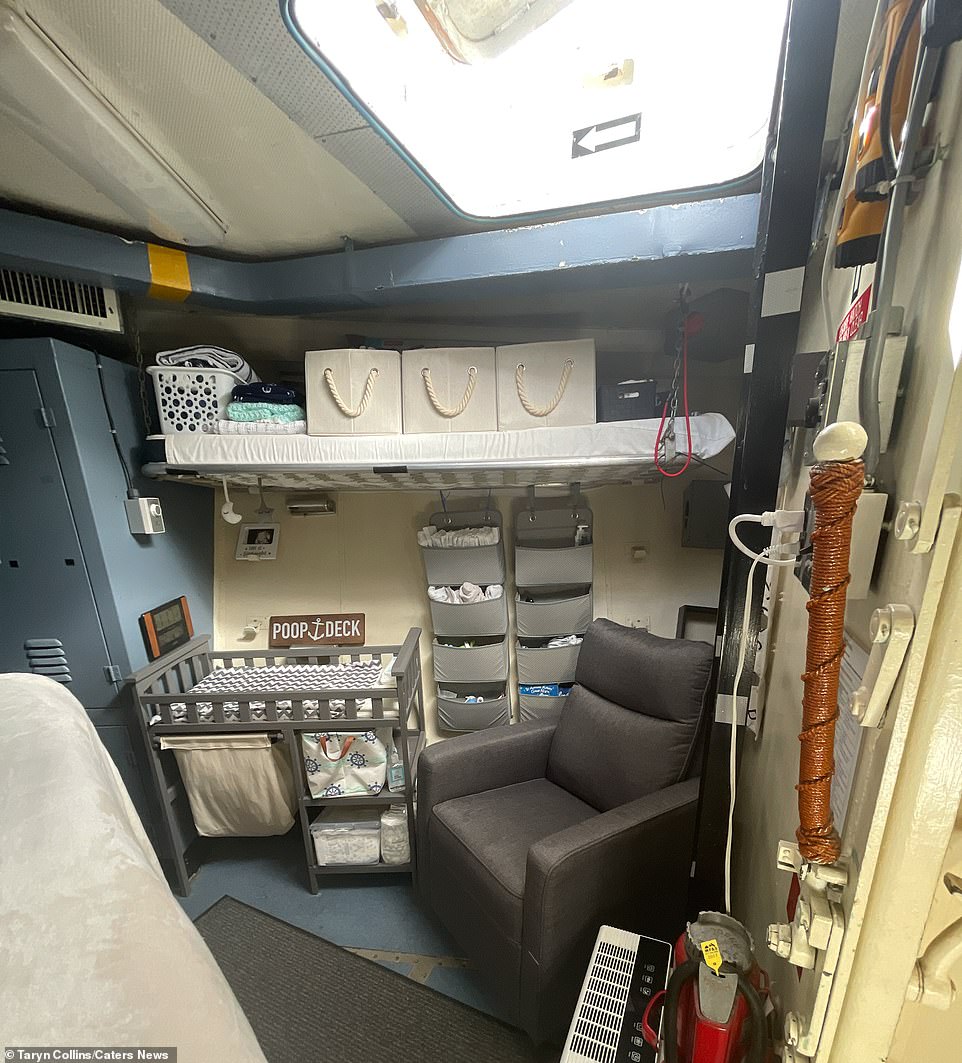 The thrifty parents have created a little nursery space for Russell, including a changing table dubbed ‘the poop deck’ and insist this is safe for their son 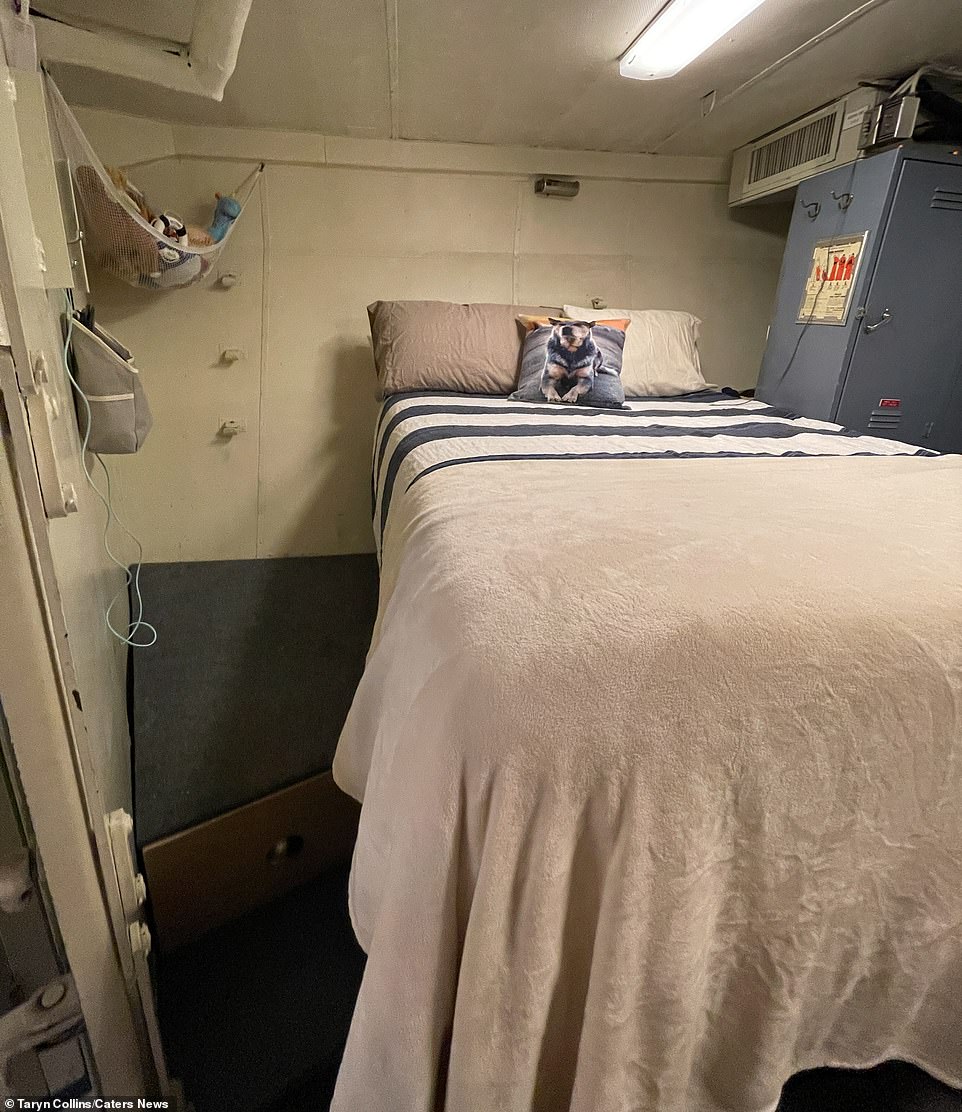 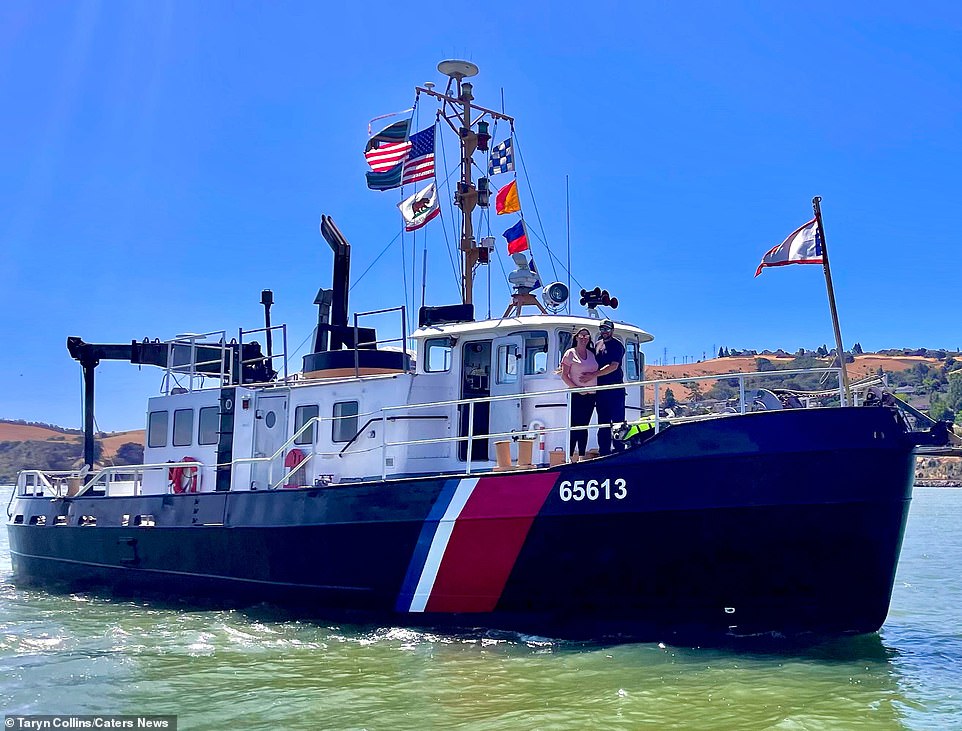 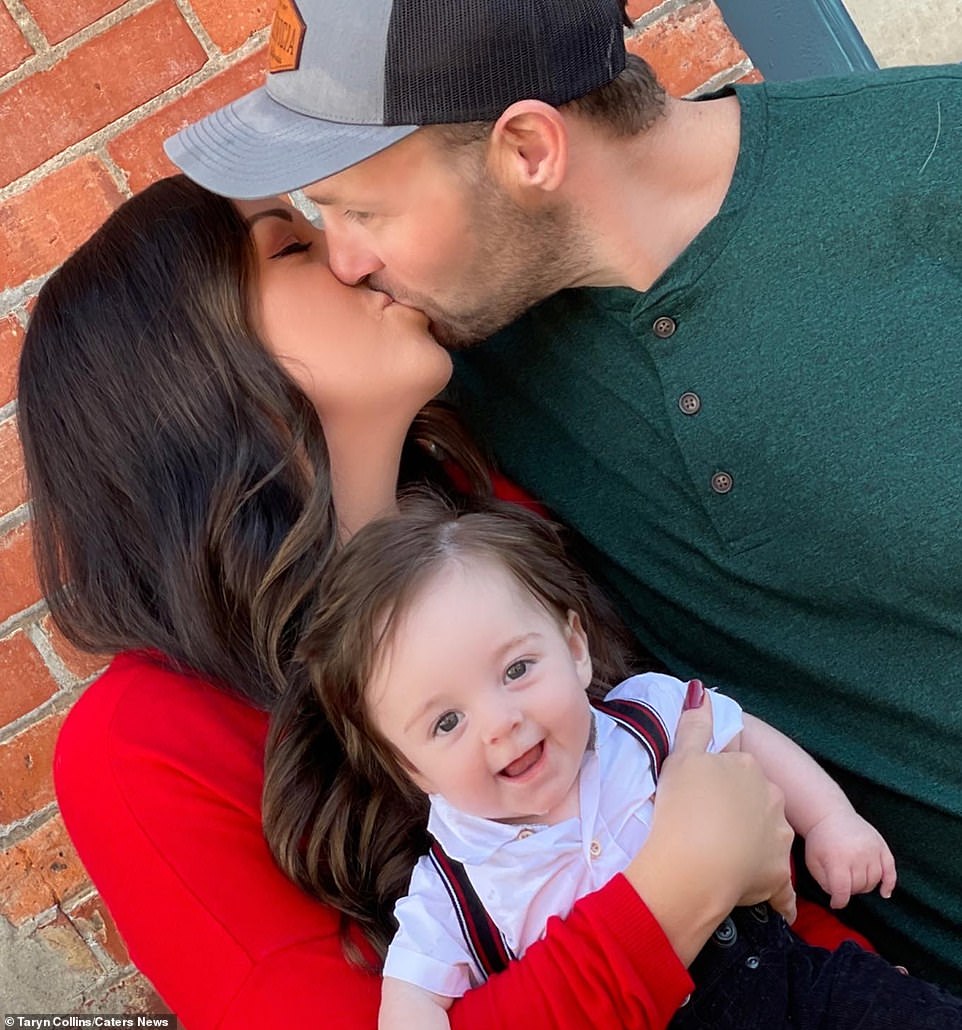 Jason bought the boat for $35,000 in 2019 on his and Taryn’s second date. The couple moved in a year later and they welcomed their son Russell in 2021

Taryn, a stay-at-home mother said: ‘When I first saw the boat in pictures I thought it was a floating tetanus shot. But once I got in there and saw Jason’s love and his passion for it and saw the ability to move on water, I fell in love with the whole idea of it.

‘We wanted to do this fun twist like it’s a home and it’s something cool on the water for people to enjoy. We are able to untie our lines and change our scenery at any given moment and that’s so nice, especially with the pandemic.

‘When I met Jason, I was living in an apartment and had just moved to the area, so he kind of started to show me the boat life. We get a view that people pay millions for, for a fraction of the cost.’

She said: ‘After posting to TikTok I’m hearing comments saying that it delusional and not safe. What part of it isn’t safe? Everything I’m doing is safe and it’s just as safe as what you would be in a house.

‘I would say about 95 per cent of the people would say that they wish they could do this and that I’m a good mom to give my son this awesome adventure. ‘The comments are all mostly positive but then I’d get the random comment telling me it’s delusional. Or somebody will say that my son will fall in the water. 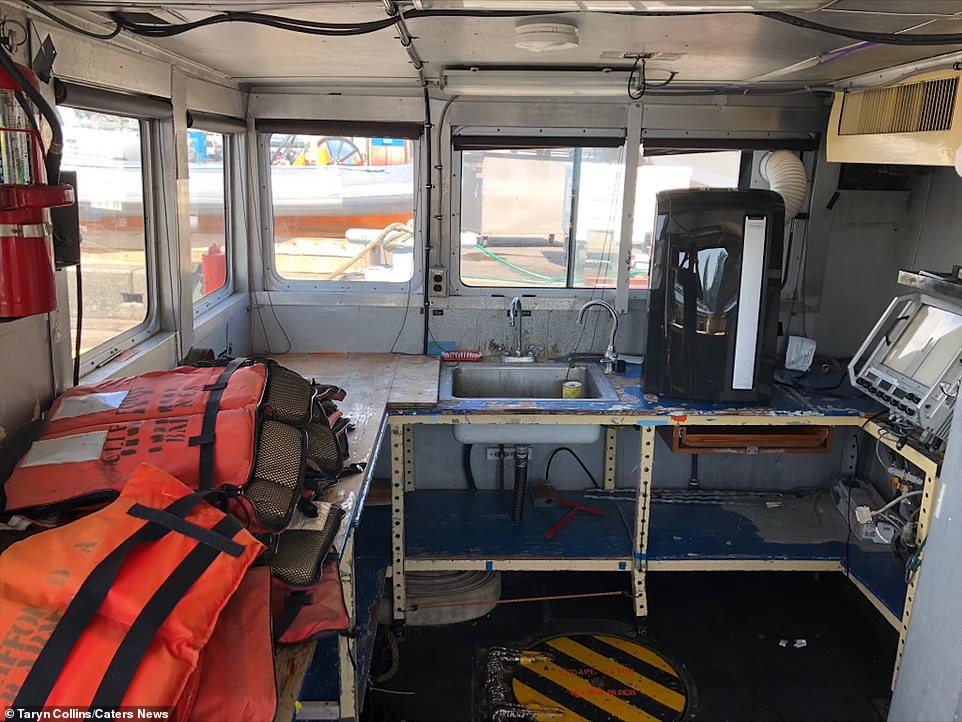 The boat came with a research lab that overlooked the deck before the renovations, which the couple have turned into their living-room 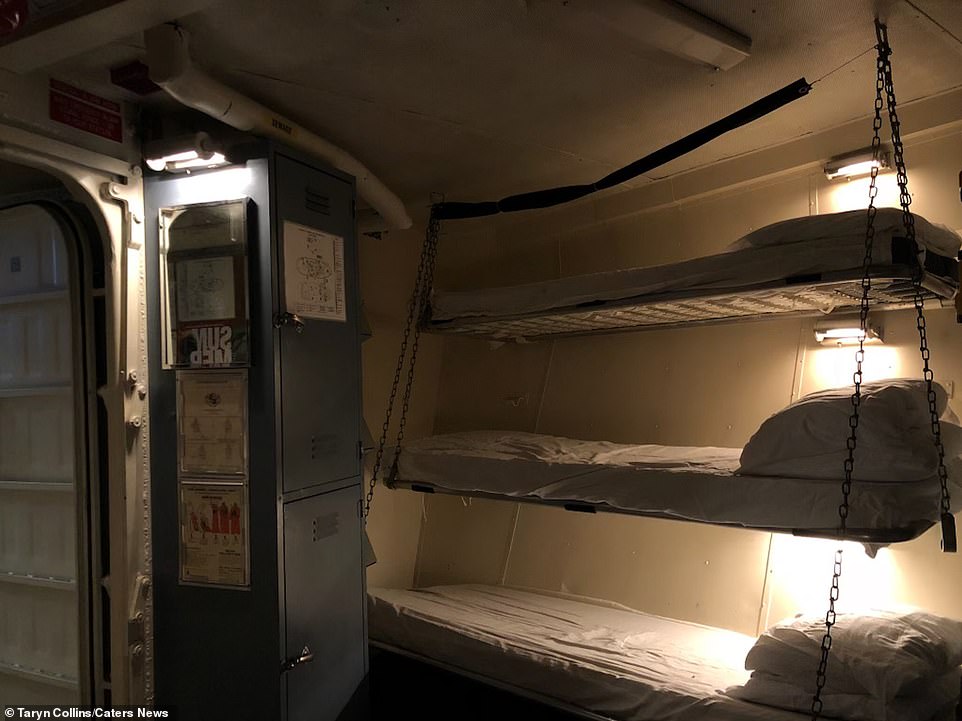 Before the renovations, pictured, the master bedroom consisted of a sleeping quarter with several hanging camp beds for the boat’s staff 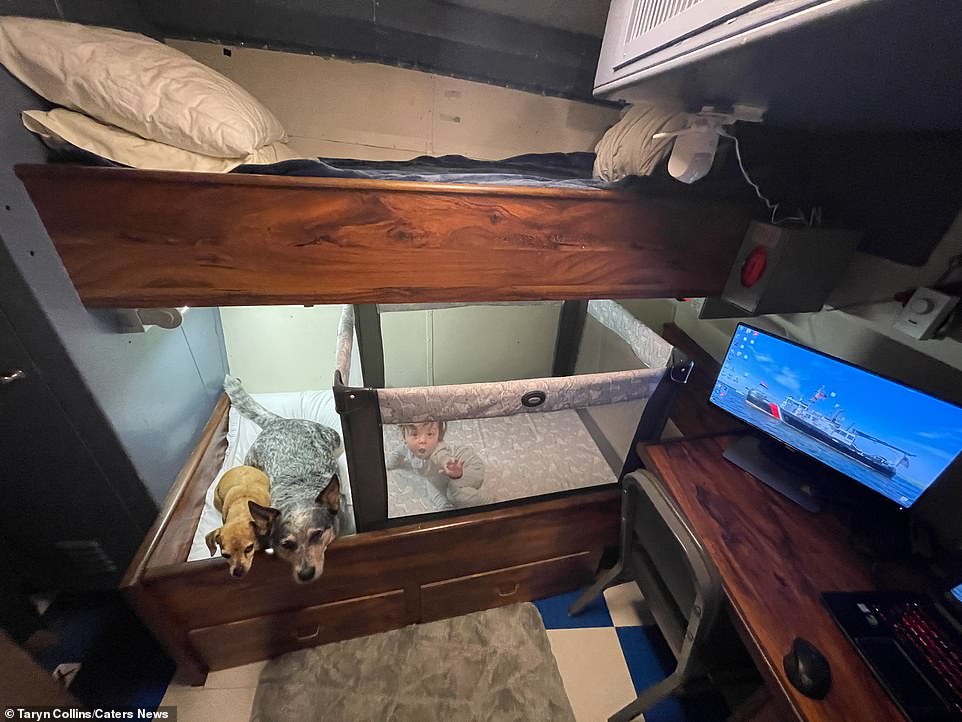 The couple’s two dogs, Bella and Skipper, live on the boat with the family-of-three. Russell has his own playing pen under a bunk bed in one of the rooms 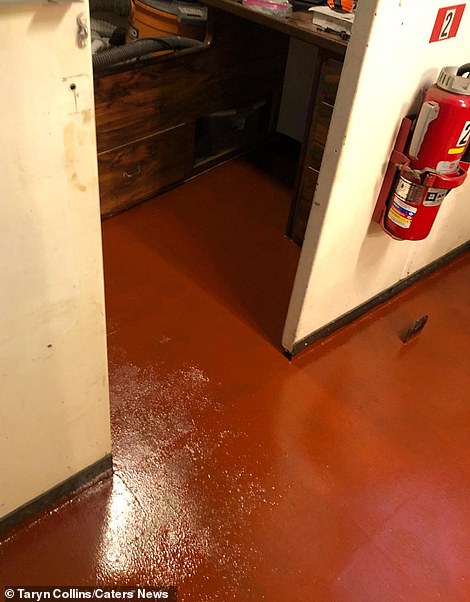 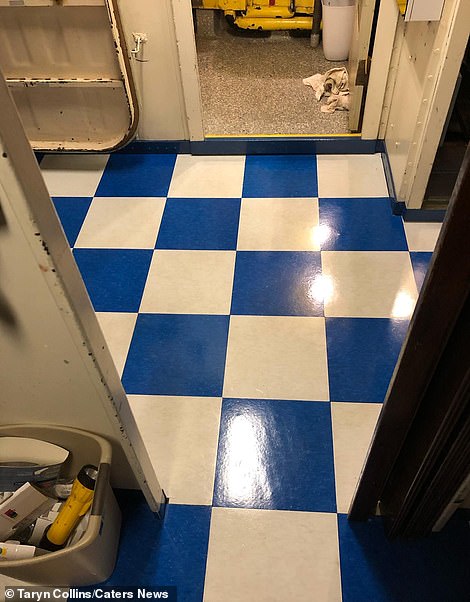 Before the renovation, left, the boat’s floors were red and did not make for a very homely setting. The couple fitted it with white and blue linoleum, right 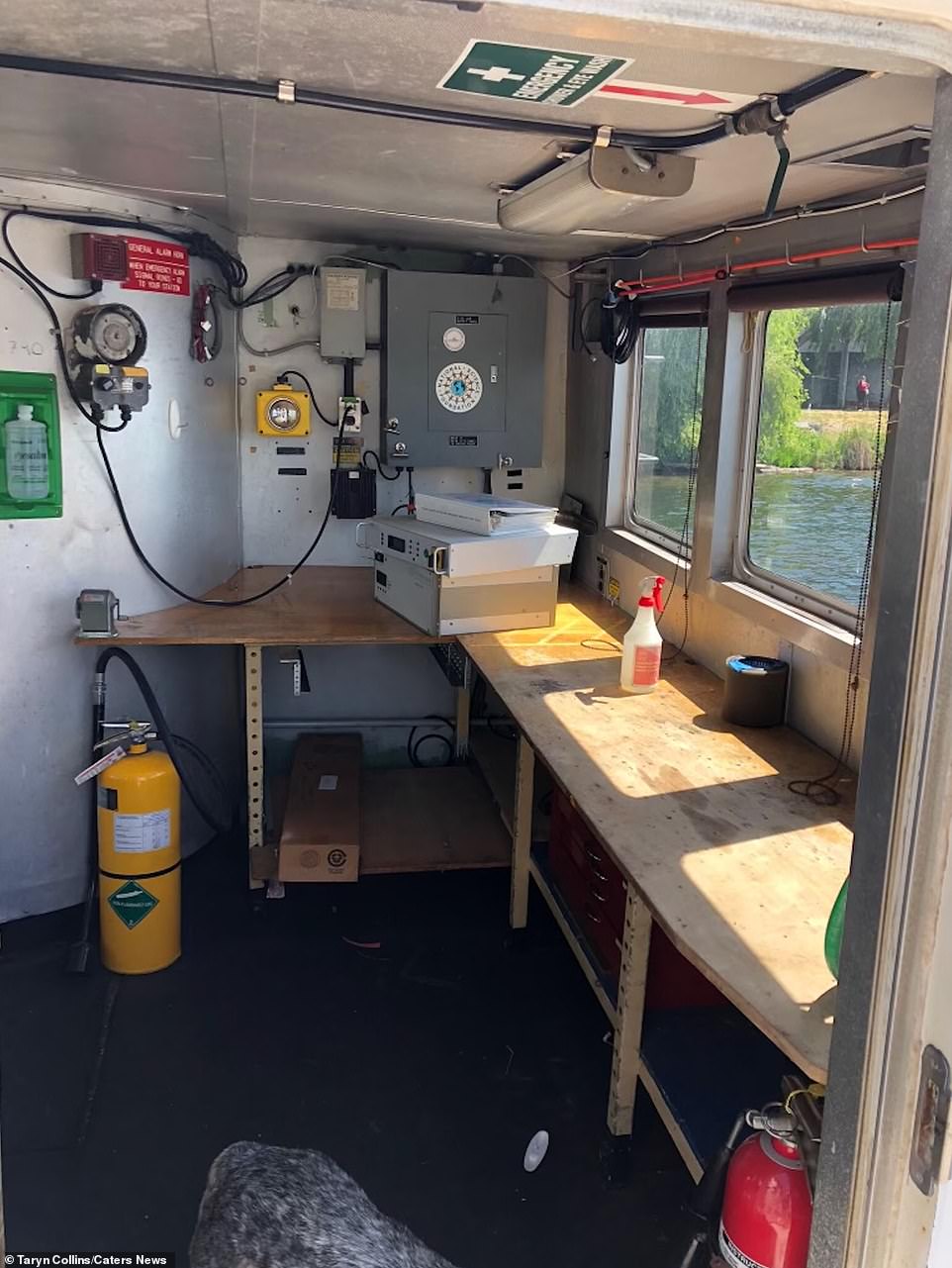 The couple turned this research lab, which had a rudimentary wooden worktop and several boating accessories, into a lounge area for the whole family

‘No matter if you live in a boat or a house, you need to supervise your children, we have doors and we have brains.’

Taryn and Jason have spent upwards of $50,000 on routine maintenance, materials, and equipment but maintain they’re saving hundreds of thousands of dollars by living on a boat instead of in a house.

She said: ‘The haul out, dry docking and launch, inspection, sanding and painting of the underwater portion of the boat for routine maintenance was about $20,000

‘Another $30,000 was spent on materials and equipment for things like shore power transformers to be able to plug into a regular marina, paint, steelwork, a full-sized washer and dryer, flooring, HVAC repairs and equipment. 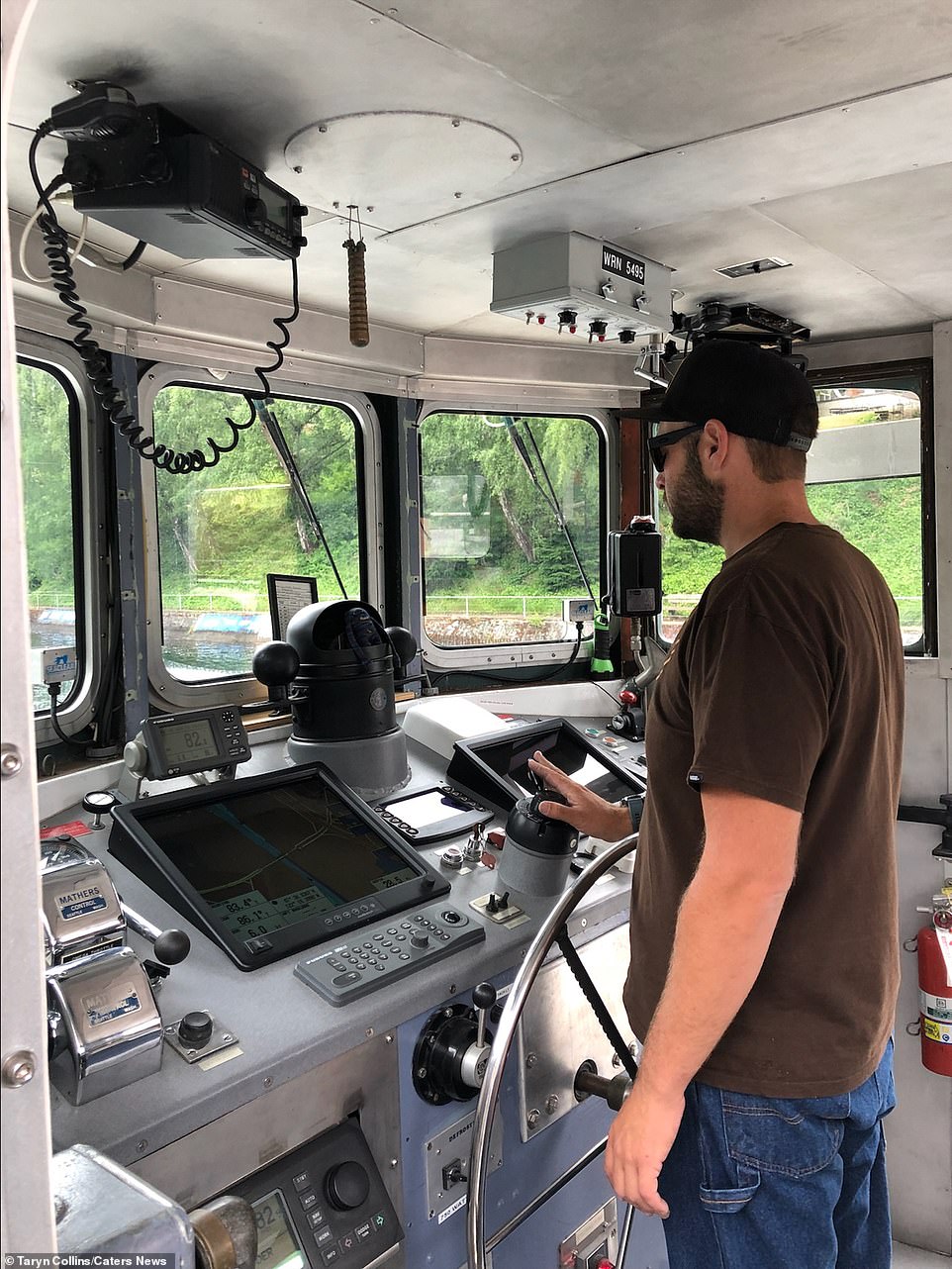 Jason at the wheel, boating his home away from the marina and onto their next adventures. The couple share glimpses of their life on social media 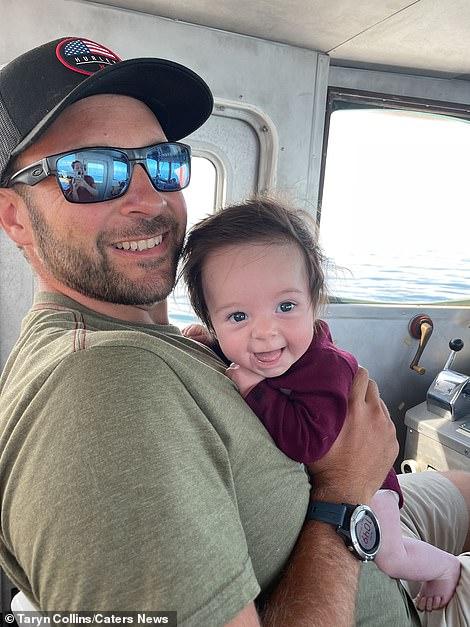 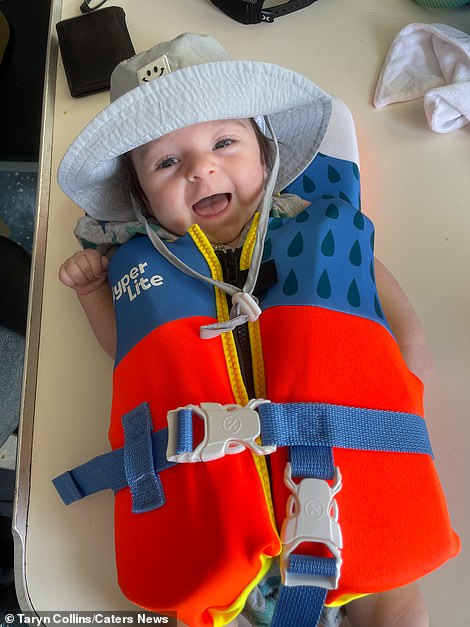 All aboard! Adorable sailor Russell has his very own life jacket, but his parents are sure that the boat is safe for him. Jason and Taryn already lived on the boat when they welcomed Russell

‘Jason did most of the work on his own which kept our costs low. We call it “sweat equity”. I wanted to show people that they can do this. It’s not super expensive if you’re not afraid of water.

‘There are so many people who live on boats, and they do with their kids, and they sail around the world. The pandemic threw me into this cool idea that to be stationary is so silly.

‘Now we can go out and see the world and meet people and be as secluded as you want or not as secluded. A lot of people think that we’re doing something crazy and extravagant and we’re not.’ 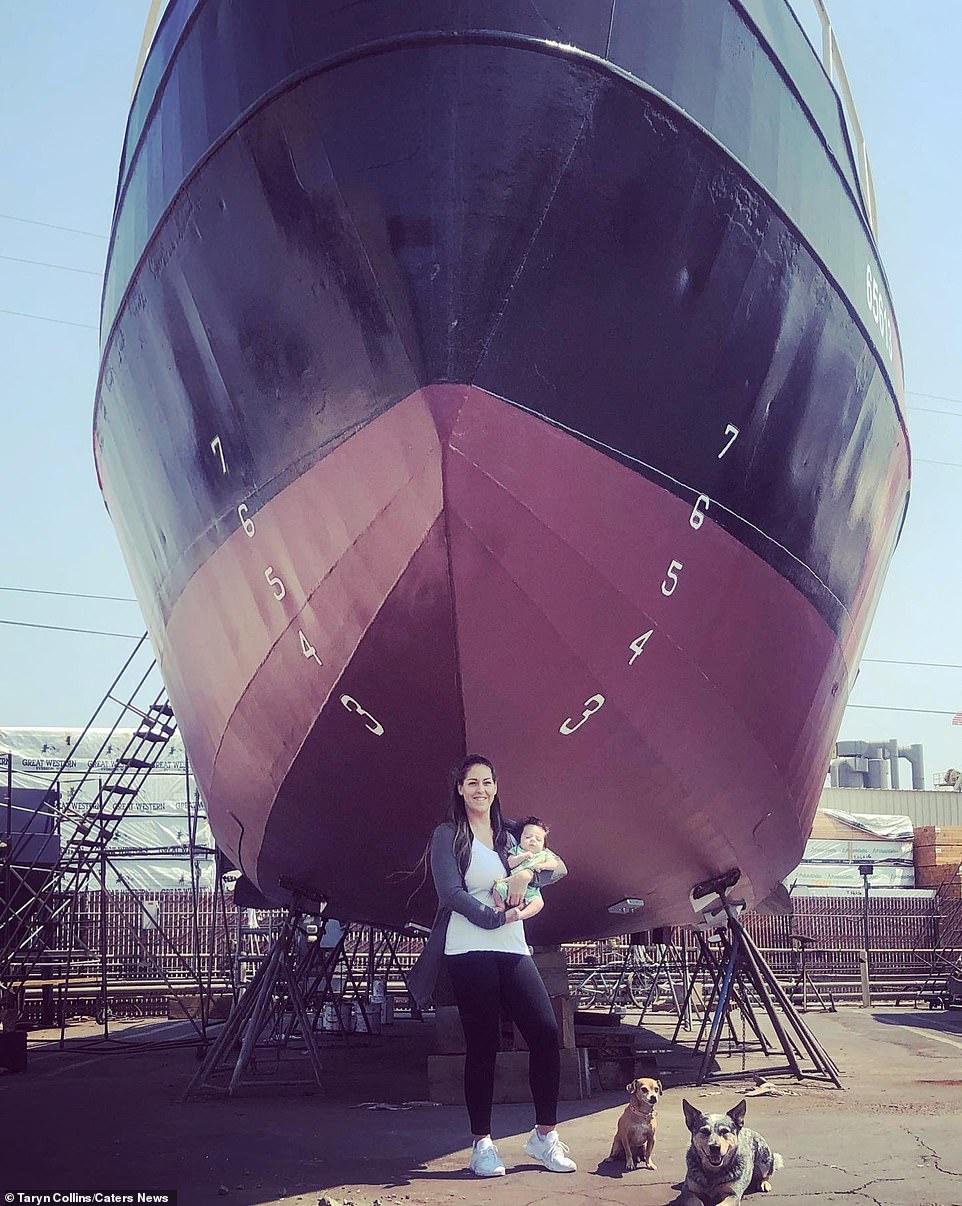 Taryn with Russell and the couple’s two dogs, proudly posing in front of the refurbished tugboat, which she spent three years refurbishing with Jason 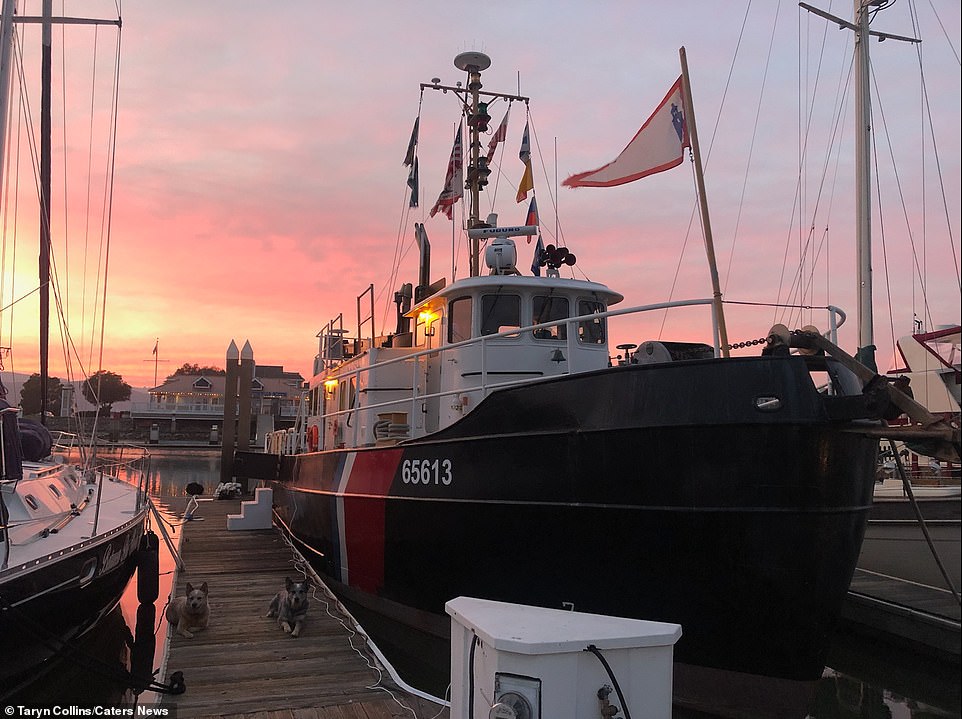 The boat in the marina at sunset. The couple, who can work the boat, can take off whenever they like, which is a major plus of boat life 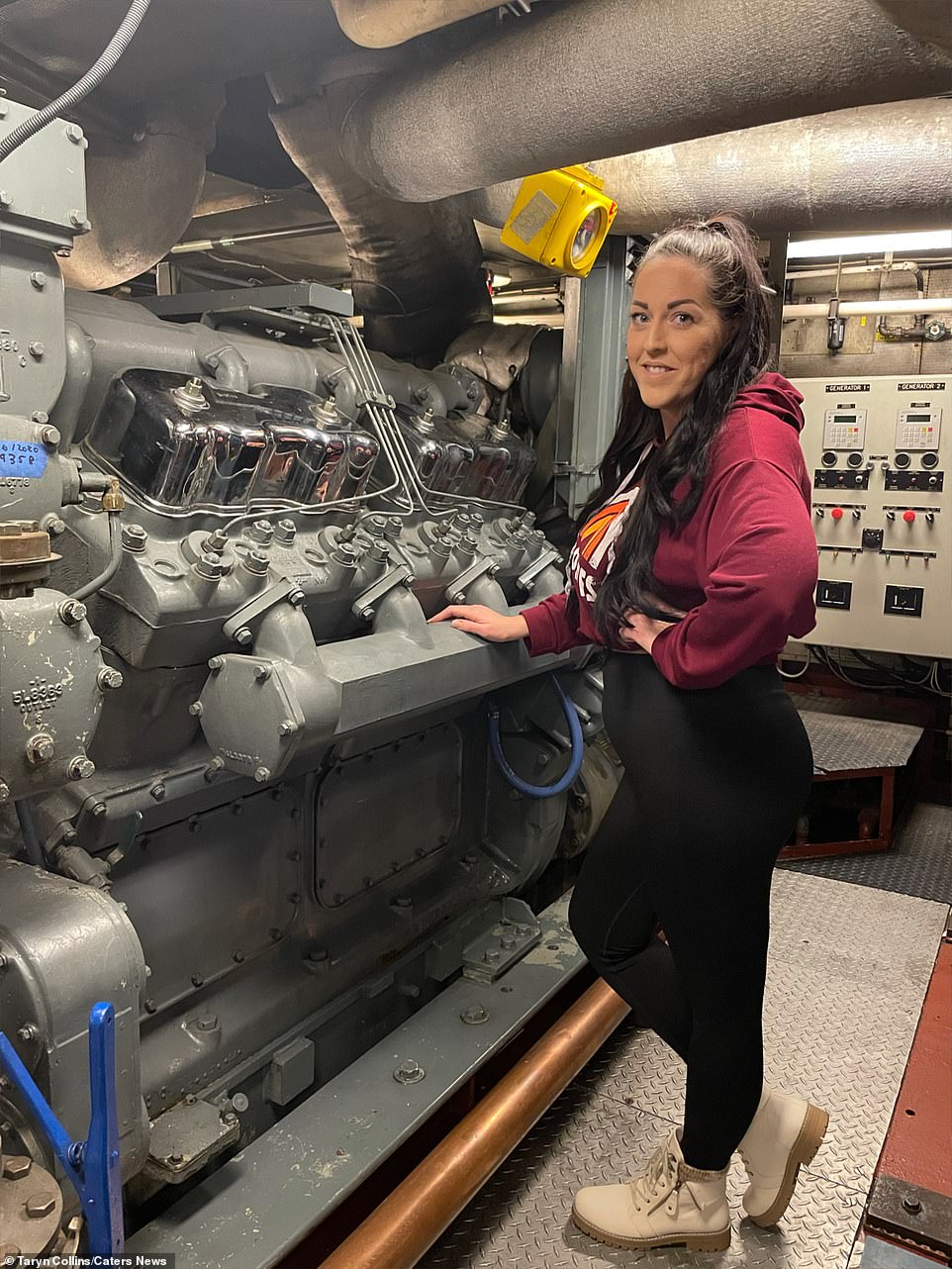 Mother-of-one Taryn, pictured in the tugboat’s engine room, said the coronavirus pandemic made her realize sedentary life is not for her