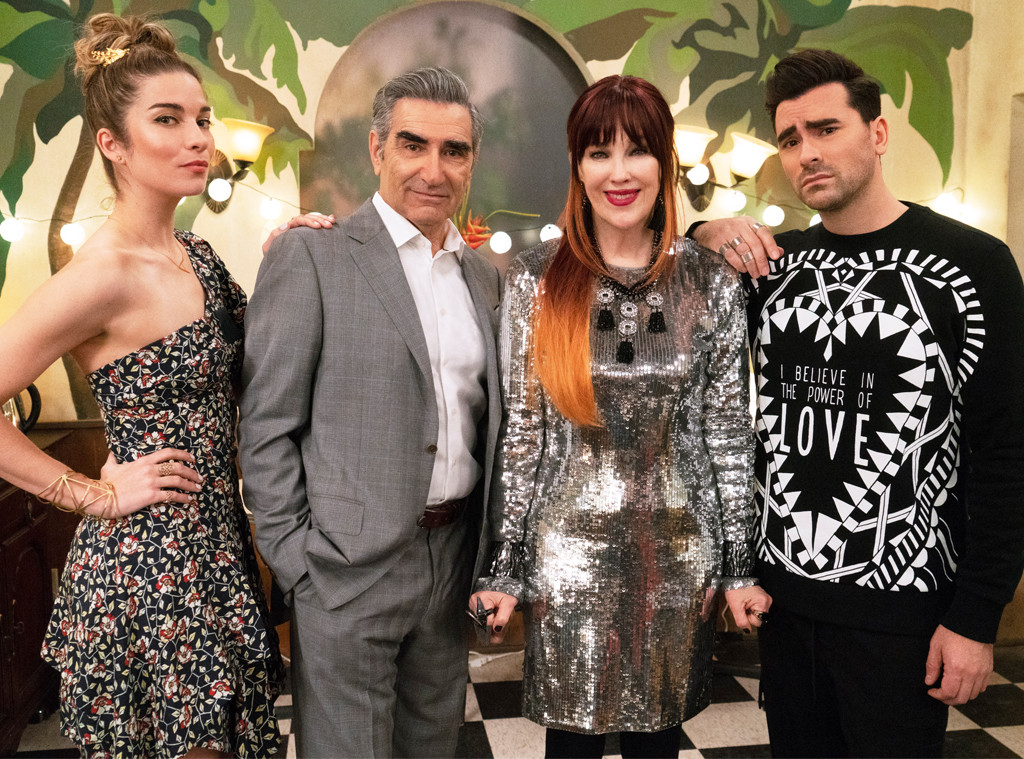 On Thursday, it was announced that the comedy, which comes from the father-son team of Eugene Levy and Dan Levy will be coming back for its sixth and final season next year. Dan took to Twitter to share the bittersweet news, which gives fans one more season of laughs—the show is currently in its fifth season on Pop in the United States and CBC in Canada—and we are freaking out.

“We are very excited to announce that Schitt’s Creek is coming back for a sixth season on CBC and Pop in 2020! We also wanted to take this opportunity to let you know that we have decided season six will be our last. We are so grateful to have been given the time and creative freedom to tell this story in its totality, concluding with a final chapter that we had envisioned from the very beginning,” the Levys wrote.

Although fans will get to see the Rose family and their absurdly lovable neighbors for 14 more episodes come 2020 we are already sad about the end. Over the past five seasons we’ve grown fond of the rich family who lost everything except the town Johnny (Eugene) bought his son David (Dan) as a joke.

When they moved to Schitt’s Creek it was clear they were fish out of water, but they somehow assimilated into the town, revamped the motel they were forced to reside in and made friends.

Sure, Moira (Catherine O’Hara) couldn’t leave her wig collection behind, or her all-black ensembles, but that’s why we love her…and the fact that she is so dramatic and screams at everything.

Johnny tries to mellow out his family and make it work on a regular basis, but he’s really no match for his wife and two children, David and Alexis (Annie Murphy), who are terrible at real life.

Whether it’s fighting over who would get murdered first because of their sleeping arrangements or battling it out for most over-the-top reactions to their surroundings, these two siblings make us wish we were at home fighting with our own family.

It seems weird, but these two are so outrageous together that it makes them lovable and easy to root for.

Of course, there are more people who reside in the dumpy little town of Schitt’s Creek that we will also miss watching. For starters, the Schitt family. Roland (Chris Elliott) might be a gross guy who sticks his fingers in fondue, but he is what makes the town great.

His wife Jocelyn (Jennifer Robertson) on the other hand is a sweetheart who is just a little off. She teaches, is the leader of the Jazzy Gals and manages to befriend Moira which isn’t exactly easy.

A few of the other standouts include Stevie (Emily Hampshire), everyone’s favorite motel employee/partner who is totally unhelpful and cynical, but she always makes us laugh, and Patrick (Noah Reid), David’s love interest who is just so darn charming.

Of course, Ted (Dustin Milligan), Alexis’ love interest and the resident veterinarian will also be missed, especially now that we know how much fun he can be with a little alcohol in him…that David and Ted kiss was so good!

Last, but not least, is Twyla. Played by Dan’s real-life sister and Eugene’s daughter Sarah Levy, Twyla is the go-to gal for food at the only real restaurant in town. She is flighty, sweet and underrated when it comes to her comedy chops.

No matter who you tune in for each week, it’s clear that Schitt’s Creek coming to an end is going to be sad for a lot of people…us included.

To distract yourself from the sad news, why not vote for the best character on the comedy? You know you want to!

What would Moira do? She’d probably throw on her mourning wig and screech, but voting for which hilarious character you’ll miss most on Schitt’s Creek is a better life plan, right?!