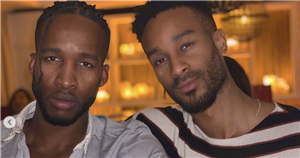 Love Island's Teddy Soares caused a stir among the girls after he set pulses racing when he entered the villa on Sunday 11 July.

And the 26 year old financial consultant, who is coupled up with Devon beauty Faye Winter, 26, has left fans of the ITV2 show overjoyed after viewers discovered his very handsome brother.

Sidney has a striking resemblance to his brother and the pair appear to have a very close bond with Teddy posting a collection of snaps to his 18,600 Instagram followers.

The brothers looked very smart as they dined at BLVD Manchester alongside a throwback snap of themselves in dungarees as children, captioned: "Some attitudes couldn't be changed, they just had to be outlived."

Sidney is an account manager at build to rent lease-up specialist firm, Home Made, and has a degree in biomedical science from the University of Sheffield.

However the handsome hunk is off the market and is dating a freelance hair and makeup artist called Elina.

The pair appear to be very in love and often post glamorous snaps to Instagram with one taken on holiday in Santorini, captioned: "Partner in crime".

Sidney is also an NLP-registered practitioner, which sees him use language to bring about change in an individual's behaviour, and has an Instagram page dedicated to inspirational quotes.

It comes after Teddy chose to couple up with Faye last leaving Rachel Finni packing her bags after she was dumped from the island.

Prior to revealing the name, Teddy told the Islanders: "I feel like she's blown me away and kept me on my toes and that's super important to me. I feel like we've got a naughty tension and I'm looking forward to getting to know a bit more about her intimately.

"So the girl I would like to couple up with is Faye."

Teddy also said in private: "It was such a hard decision with the two girls standing up there, definitely my top two favourite Faye and Rachel. But I had to go with my heart, which was Faye because she wowed me. I do think I've made the right decision but time will tell."

Teddy had previously got to know Kaz, Rachel, Sharon and Faye during a speed dating session.

The hunky new Islander wasted no time in complementing Kaz as he told her: “I was a bit like, ‘Woah’, when you walked through. I had to settle my nerves a little bit. Take a few deep breaths.

”When he met Faye, the hunk played footsie with her and said: “I can’t lie, I’ve not done footsie with anyone, or whatever this is… this is the first time, it’s quite cute.”

He also had an interesting chat with Rachel, as she said: “I’m very modern in my dating. I don’t think a guy should always pay, I don’t expect a guy to pull out my chair… I want a guy to be a gentleman, but I don’t want a guy to think I’m one of those girls that fully depends on them to make me happy."