I do it, without fail, every single year. By the end of December, I am desperate for a clean slate, a set of 365 days with no mistakes in them yet. I make grand plans, personal proclamations, and promises to myself. I have a perfect vision of a year not-yet-come, and this vision is an undeniably powerful motivator. Until it’s not.

For me, the real struggle comes with the realization that a new calendar cannot fix all of my ills, personal or otherwise. Writers and other creatives probably know the drill well enough by now, in the year 2019: arts programs are always the first to be cut; journalists the first to be disparaged; writing, painting, singing, or in any way crafting joy is a constant struggle in the face of oppression. And yet it is always a bit of a shock, and one that makes it easy for my mind to catch on anything but the hard task of making something new.

I can’t tell you whether Toni Morrison, writer of such widely-acclaimed novels as The Bluest Eye and Sula, has ever felt the post-New Year creative doldrums. But if there is any writer who has been able to see past the world’s ills — or, more accurately, use them to her advantage — in order to create something beautiful, it’s Morrison. And The Source of Self-Regard, a new collection of selected essays, speeches and meditations from the author, has inspired me to see my creative pursuits through, even in times of great upheaval. 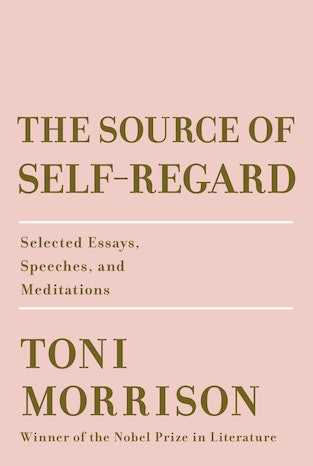 ‘The Source of Self-Regard’ by Toni Morrison

In the first essay in The Source of Self-Regard, entitled "Peril," Morrison writes "Authoritarian regimes, dictators, despots are often, but not always, fools. But none is foolish enough to give perceptive, dissident writers free range to publish their judgements or follow their creative instincts."

While I do not count myself among these brave creators who have died or suffered to tell their stories, I think what Morrison is saying in her essay applies to every single writer and creator out there — especially those who feel as if their own art in meaningless in the face of such turbulence. She writes:

Writing and creating in a world in which every new day seems to bring another hardship, heartache, or catastrophic event can be so daunting as to be paralyzing. But what Morrison knows, better than any of us, is that stillness does not have to mean nothingness. To write is not to join the frontlines, to protest in the streets, to demand change with the ferocity of our bodies; it is to sit still with thoughts, to coax them to the surface, to demand they be known.

But that stillness does not need to mean stagnation. To write, to create anything at all, is itself a form of change. It is to make something where there once was nothing, which is a profound act of hope.

And so, it is our duty to sit down and write — those plays, those comedies, those romances, those memoirs. Not necessarily because we have been called to pen the next great political manifesto, or even to become the next Toni Morrison. But because, as the author maintains, "A writer’s life and work are not a gift to mankind; they are its necessity."