Scott Morrison’s first meeting with Joe Biden in the Cornish seaside resort of Carbis Bay had some bad press. The much anticipated bilateral between the pair at the G7 in June was dubbed a snub by Morrison’s detractors and political opponents at home because British Prime Minister Boris Johnston had joined them.

The narrative was, at the time, that Morrison’s “inability” and “failure” to secure a one-on-one meeting with Biden was because of his “stubborn refusal” to commit to net zero emissions by 2050. 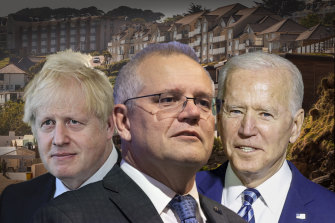 Prime Minister Scott Morrison’s meeting with British Prime Minister Boris Johnson and US President Joe Biden was, at the time, written off. Credit:

Unlike other meetings at the summit, television cameras were not allowed to film the encounter between Morrison, Biden and Johnson, and journalists were not permitted to observe it. It helped fuel the narrative to those who wanted to believe it.

Morrison said afterwards it was a meeting of “friends and allies, who share a view on the world,” and the trio had a “very easy understanding” between them.

Now, three months later, we know why. It was the first time the concept of AUKUS – the new “forever” partnership between the three nations – was discussed and the first time the new US President had been directly asked by Morrison to share his nuclear submarine secrets.

It was a proposal 18 months in the making and a secret only a handful of people were trusted to keep for months. It would result in what the US has described as the “biggest strategic step Australia has taken in generations.” Morrison says it is now “probably the most important trilateral meeting Australia has had for the past 70 years”.

In early 2020, amid growing regional concerns of China’s rising assertiveness and the government’s frustration over issues with the French contract, Morrison again asked the question of the Department of Defence: Why not nuclear submarines?

It wasn’t the first time this question had been posed but amid a rapidly changing world Morrison wanted a better answer than the one he had previously received.

Only Angus Campbell, the Chief of the Defence Force, Defence Department secretary Greg Moriarty, Chief of Navy Vice Admiral Michael Noonan and one other – the unnamed author of what would end up being a discussion paper – were aware of the request.

It had long been a divisive issue both within government and within Defence, but as former prime minister Tony Abbott pointed out in 2017, Australia had not so much as made a formal decision against acquiring nuclear-powered submarines as “studiously avoid[ing] even asking the question”.

“This was true of my government, like its predecessors because – in hindsight – we may have overestimated Japan’s capacity to mount a bid and expected more than was reasonable of a submarine partnership virtually starting from scratch,” he said then in a speech to the Centre for Independent Studies.

“This is a debate we should no longer avoid, especially as the strategic balance is shifting even faster now than last year’s defence white paper anticipated. I’m not saying that we must go nuclear, but surely we should at least consider the option before the opportunity is lost for another several decades.”

His successor, Malcolm Turnbull, wondered in his autobiography whether in hindsight nuclear submarines should be properly considered given the new global dynamic.

While it was not Morrison’s view as treasurer when the contract with the French group Naval was signed in 2016, after two years in the big chair he was curious if acquiring nuclear submarines would be feasible. 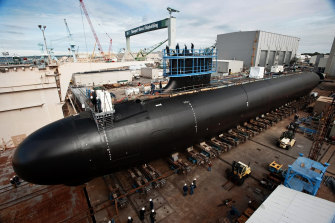 A US Virginia-class attack submarine under construction in 2012.Credit:US Navy

After receiving the paper he directed a secret taskforce be formed and headed by Commodore Tim Brown. It included engineers, ex-Navy leaders and other experts. Dr Alan Finkel, the outgoing chief scientist with a history of strong advocacy for nuclear power, later joined the process.

It was after this group was formed that Morrison told his first colleague, then-defence minister Linda Reynolds, as the pair went to work on a project which remained secret for months.

Once it was completed in late 2020, Australian officials were given the green light to begin “engaging the systems”, code for defence boffins talking with counterparts in the US and UK.

One by one Morrison’s colleagues were brought into the conversation in the national security committee of cabinet. When Peter Dutton was sworn in as Defence Minister earlier this year he signalled changes lay ahead but never gave the game away.

The one hurdle could be that the US had only once shared what a senior administration official described to reporters on Thursday as “extremely sensitive” submarine propulsion technology – more than 60 years ago – with Great Britain.

Many countries had asked and many US administrations had said no. Despite their close relationship, Morrison never asked the question of Donald Trump directly and left it at department level until he met with Biden in June.

He did, however, speak to Johnson about the possibility weeks earlier. The pair agreed the G7 would be the place to start the formal discussions.

Biden insists it is a one-off, a reflection of the depth in the relationship between Australia and the US, that continues to endure tense moments and burning issues, such as climate change.

“But this is Australia,” Biden told Morrison when it came to the conversation about trust between the two nations.

His administration described it as a fundamental decision that would “decisively” bind Australia to the United States and Great Britain for generations.

“Only a handful of countries possess nuclear-powered submarines, and it is a momentous decision for any nation to acquire this formidable capability,” Johnson said at Thursday’s joint announcement.

“The UK, Australia and the US will be joined even more closely together, reflecting the measure of trust between us.”

But the “forever” partnership may well have come at the cost of short-term pain in Morrison’s relationship with French President Emmanuel Macron, as it emerged that while the Australian leader looked to America, he was still teasing his counterpart in Paris.

Morrison’s parliamentary troops, who have been growing restless in recent months as they have watched their leader stumble on COVID restrictions and battle to win a media war with state premiers, were cock-a-hoop following the announcement.

Many shared the sentiment that they can put up with domestic mistakes as long as the government is getting the big things right. And that’s how they interpreted Thursday’s announcement.