Empire actor Jussie Smollet was hospitalized on Tuesday morning around 2 a.m. after being assaulted in Chicago, which the police are investigating as a “possible hate crime.”

The Chicago Police Department released a statement saying Jussie was attacked and beaten by two people who were yelling “racial and homophobic slurs.” The statement also described how the two people “poured and unknown chemical substance on the victim” and “wrapped a rope around the victims neck.”

TMZ is reporting the two people shouted, “This is MAGA country” during the attack, and it’s possibly in connection to a note Fox Studios received eight days ago that was addressed to Jussie and said, “You will die black f*g.”

After the assault, Jussie took himself to Northwestern Memorial where he was later discharged and deemed in “good condition.”

Once the news broke, celebrities and his 20th Century Fox Television and Fox Entertainment family showed an outpouring of support for Jussie:

This is heartbreaking and terrifying…please pay attention to what’s happening here. Sending all my love to @JussieSmollett https://t.co/YTJ6bwLDkZ

Regardless of who you voted for or what party you support, this should sicken and enrage you. https://t.co/vLo76YdqIy

I’m just now hearing the news about the senseless hate attack on my #EMPiRE Nephew @JussieSmollett IM SO ANGRY AND HURT ABOUT THIS! THIS MUST STOP!! SPREAD LOVE NOT HATE! PRAYERS UP TO U NEPHEW! 😢😢🙇🏾‍♀️🙇🏾‍♀️ pic.twitter.com/p4GqfNW3An

Sending love to my brother @JussieSmollett . These trash ass individuals will not go unpunished. pic.twitter.com/IK0kId3tcZ

This is so awful. Sending love to @JussieSmollett. 🙌🌈 https://t.co/U3wKFBAXi2

god bless jussie may he have all the support he needs healing from this. 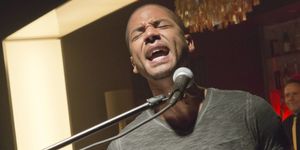