Eleanor Emmons Maccoby, a distinguished psychologist and a pioneer in the field of gender studies who was the first woman to head the Stanford University psychology department, died on Dec. 11 in Palo Alto, Calif. She was 101.

Her death, at a retirement community, was confirmed by her son, Mark, who said the cause was pneumonia.

Dr. Maccoby, whom the American Psychological Association listed among the 100 most eminent psychologists of the 20th century, conducted pathbreaking research in child development and gender studies. She explored a wide range of topics, including interactions between parent and child and the effect of divorce on children.

But the overarching themes of her long career were the differences between the sexes and how they develop. These were the subjects of two of her most significant books: “The Psychology of Sex Differences” (1974) and “The Two Sexes: Growing Up Apart, Coming Together” (1998).

“She advanced our understanding of how girls and boys develop the characteristics that we think of as boy things and girl things,” Dr. John H. Flavell, a psychology professor emeritus at Stanford, said in a telephone interview.

The answer involved a complex combination of biological, cognitive and social factors, including the dynamic in which children learn from other children.

Dr. Maccoby did not initially consider herself a feminist. But she was gradually awakened by slights along the way, like being not allowed to enter the Faculty Club at Harvard through its front entrance, which was reserved for men, even though she was a member.

Asked in a video interview in 2013 how she became interested in gender issues, she replied, “We lived it.”

While teaching at Stanford, she noticed that scientific literature either portrayed women negatively or excluded them altogether. One study, for example, said female prisoners were more likely than men to sell out a fellow inmate in exchange for her own freedom. Yet even though almost 30 other studies disputed that finding, none had been published, Dr. Maccoby found, because a conclusion of “no difference” was not considered valuable.

This inspired her and Carol Nagy Jacklin, a developmental psychologist and scholar of gender, to write “The Psychology of Sex Differences,” a landmark book of more than 600 pages that shook up the field. (Dr. Jacklin died in 2011.) The book included the first large-scale review of the literature to see which if any of the purported psychological and social differences between boys and girls actually existed.

The authors found that studies showing few differences were rarely published. And their own research showed that some published studies claiming major differences between the sexes were often not replicated.

For example, they wrote, “The allegation that girls learn best by rote processes, boys by some more advanced form of reasoning, is clearly not supported by the evidence.”

In a 2009 interview with Psychology’s Feminist Voices, Dr. Maccoby said, “The upshot of that book, its basic message, was that most of what we think about as differences, essential differences between the sexes, are myths.”

Among those myths: girls are more “social” and suggestible; boys are more analytic; and girls have lower self-esteem (though as girls get older, the researchers said, they do lose self-confidence). 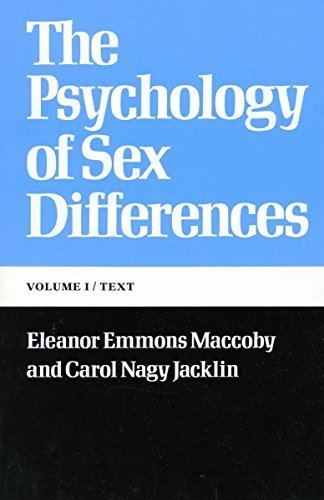 But more than two decades later, Dr. Maccoby argued that even if the psychological differences between the sexes were relatively minor — especially when boys and girls were studied individually — their differences were magnified in social settings, as boys tend to play with boys and girls with girls.

This self-segregation is inevitable, Dr. Maccoby wrote in “The Two Sexes.” The stereotypical behavior of boys in groups (roughhousing) is very different from that of girls (talking), she maintained, and it influences how the two sexes interact into adulthood.

“I certainly switched over from the idea that gender didn’t matter to the notion that it matters a hell of a lot,” she said in the 2009 Feminist Voices interview.

Dr. Maccoby said in an oral history at Stanford in 2011 that a female colleague had advised her to suppress any of her research that might be disadvantageous for women. Dr. Maccoby refused, she said, determined to publish whatever she found.

Until the publication of “Two Sexes,” she said, “I had been pretty much the darling of the feminist movement, because they liked the message that there really aren’t very many differences between the sexes. And they felt that I had let them down when I came out with this book.”

Dr. Maccoby was born Viva Emmons on May 15, 1917, in Tacoma, Wash. Her name was changed to Eleanor soon afterward because of the potential confusion with her mother, Viva May (Johnson) Emmons. Her father, Eugene, owned the Tacoma Sash and Door Company.

Eleanor and her three sisters were raised in Tacoma. She graduated from high school in 1934, during the Great Depression, and became an ardent New Dealer.

She attended Reed College in Portland, Ore., for two years before transferring to the University of Washington, where she was Phi Beta Kappa and where she met her future husband, Nathan Maccoby, who was also a psychologist. They were married in 1938. (He died in 1992.)

Dr. Maccoby earned her master’s and doctorate degrees in experimental psychology at the University of Michigan and conducted some of her doctoral work at the lab of the renowned psychologist B. F. Skinner at Harvard. She taught and did research at Harvard from 1950 to 1957. But, she said, felt that Harvard was a tough place for women to advance.

While teaching and raising the couple’s three adopted children, she went on to be the author or co-author of 11 books, including a memoir, which she wrote at 99, and scores of monographs and essays. She was chairwoman of the psychology department from 1973 to 1976, the first woman to lead it. She was also “the first woman to teach in slacks rather than in a dress or a skirt,” she said.

Because Stanford had so few women in tenured positions, she said in the oral history, they “overutilized” her, appointing her to numerous universitywide committees. These included one to adjudicate cases of faculty members who had been accused of sexual harassment.

“The thing that struck me was that the men who were accused were absolutely unable to believe that their advances had been unwelcome,” she said. “They had a kind of quality of ego that was remarkable to see in action.”

Dr. Maccoby also served on a committee to help promote accomplished women who had been blocked from advancement or higher pay. This had been the case for Dr. Maccoby herself. At one point, when students got hold of records listing faculty salaries, they broadcast them at a public demonstration and noted that the distinguished Dr. Maccoby was one of the lowest paid professors on campus. Her son said that within a couple of weeks, the chagrined university doubled her salary.

Dr. Maccoby faced mandatory retirement from Stanford at age 70 in 1987, at which point the pace of her writing and research only increased. She was elected to the National Academy of Sciences in 1993.

In addition to her son, she is survived by two daughters, Janice Carmichael and Sarah Maccoby Blunt; two sisters, Helen Barclay and Joan Taylor; seven grandchildren; and nine great-grandchildren.

Asked for the secret to his mother’s long life, Mark Maccoby said in a telephone interview that longevity ran in the family, along with a sense of humor. He recalled how she used to like to say, “If I had known I was going to live so long, I would have taken better care of myself!”