Lifesavers were so overwhelmed with rescues on Friday they temporarily closed the beach at Venus Bay to help five people in trouble in the surf after a horror week on Victoria’s coastline.

Life Saving Victoria is on high-alert for New Year’s Day because drownings are almost 70 per cent more likely on a public holiday and the Bureau of Meteorology has forecast a top of 34 degrees for Melbourne on Sunday. 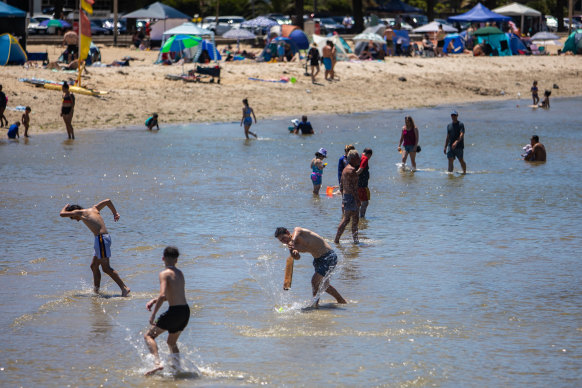 Beachgoers cool down at Altona on December 27.Credit:Scott McNaughton

“So all of those risk factors together have got all of our lifesavers and lifeguards on high alert.”

Twenty-one people were rescued in Victoria on Friday and lifesavers were forced to temporarily close the beach at Venus Bay when five people got into trouble.

An 11-year-old boy and his father were pulled from the surf just outside the flags about 12.30pm at the patrolled beach about 120 kilometres south-east of Melbourne.

“Less than an hour later, three people found themselves in distress at another unpatrolled beach a couple of kilometres away,” Treloar said.

“What’s so concerning about that incident, is a patrolled location was available only a short-distance away where our lifeguards would be in a much better position to respond.”

The flags were pulled down at Venus Bay so that lifesavers could focus on the rescues.

Paramedics assessed a man, aged in his 20s, at the beach before he was taken to Wonthaggi Public Hospital in a stable condition.

The other rescues on Friday included two people at Woodside Beach, two at Portsea, four in Geelong, six at Gunnamatta Beach, one in Jan Juc and one at Torquay.

Treloar said Victorians needed to make good decisions by swimming between the red and yellow flags, supervising children and monitoring their alcohol intake.

“With the behaviour we’ve seen from some people over the last couple of days, that leaves us concerned,” Treloar told reporters on New Year’s Eve, when the temperature was forecast to reach 29 degrees in Melbourne.

“Don’t drink and drown … We know people are going to go out and have a drink [on Saturday night] for New Year’s Eve.

Victoria suffered the highest number of fatal drownings over the Christmas period in 18 years, with four deaths between December 25 and December 28, when rescues also more than doubled.

He said any waterway could be dangerous and anyone could drown, with middle-aged men, people who might consider themselves to be experienced swimmers, the cohort most likely to drown.

Twenty-two people have drowned since July 1 in Victoria and there have been about 232 rescues so far this season, almost half of which were since Christmas Day.

Four people died between Christmas Day and December 28. Two teenagers, a five-year-old girl and a middle-aged man died after being pulled from Victorian waters over the four-day stretch.