Things aren’t looking good between Kylie Jenner and Jordyn Woods. News broke earlier this week that Khloé Kardashian reportedly dumped Tristan Thompson for reportedly cheating on her with Woods, Jenner’s best friend. Woods has basically been a member of the KarJenner family for years, being a model for Kardashian’s Good American Line and literally living in Kylie Jenner’s house with her and Stormi. But does Jordyn Woods still live with Kylie Jenner? According to reports, homegirl is out. Buh-bye!

People reports that Woods has left Jenner’s California home in response to all of this reported drama she and Thompson have reportedly created. Elite Daily reached out to Jenner and Woods’ teams for comment, but did not hear back by the time of publication.

A source told the outlet that Woods is reportedly “moving back to her mom’s house" following the bombshell that was revealed earlier this week. "It’s been a difficult time and she’s broken up about it," they said. "She’s heading home to be with her mom." Yeah, it’s probably best not to be around the Kardashians right now.

On Tuesday, Feb. 19, TMZ and Hollywood Unlocked reported that Khloé Kardashian and Tristan Thompson were done for good, and all because Thompson reportedly hooked up with Woods. Thompson was reportedly in Los Angeles to visit Kardashian and their daughter, True, for Valentine’s Day. While in L.A., Thompson and Woods reportedly partied together and were reportedly seen making out by other people they were with. According to reports, Woods stayed at Thompson’s L.A. home until the early hours of the next morning. Elite Daily previously reached out to Kardashian, Thompson, and Woods’ teams for comment on these reports, but did not hear back by the time of publication.

The Kardashians reportedly learned of Thompson’s and Woods’ infidelity rumors on Feb. 18. Earlier that same day, Kardashian was posting positive comments on Woods’ Instagram and Kylie Jenner was posting Snapchats with her. Thompson reportedly denied the rumors when Kardashian confronted him about them, but she had reportedly been told by multiple people who were at the party that the rumors were true. 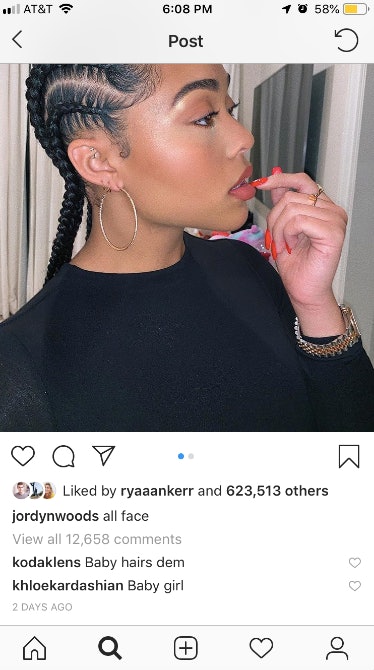 Another source previously told People that the KarJenner family thought the rumors were completely unbelievable when they first learned of them.

“When they first started hearing on Monday that Tristan made out with Jordyn, no one really believed it,” the source told the outlet. “That Tristan would be inappropriate, yes everyone knows that he can’t behave—" (go off) "—but that Jordyn would make out with him, it first seemed like a made up rumor.”

The source continued, claiming, “It wasn’t anything they wanted to drop, so several family members reached out to people they believed had been at the party. And they were told it was true.” Yikes.

Neither the Kardashians nor Woods have publicly confirmed or denied the rumors. Thompson seemingly responded on Twitter on Feb. 19 by tweeting, "FAKE NEWS," according to E! News, but the tweet was deleted shortly after.

Khloé Kardashian and some of her closest friends did leave some pretty telling comments on Instagram, however.

Kardashian, in the most telling comment, posted a bunch of yelling emojis. Haqq commented "STRONG FACTS," and Pippen commented "Amen!!!" So it looks like these rumors are airing more on the side of fact than fiction — as far as Kardashian, Haqq, and Pippen are concerned, at least.

The source told People, “It’s all a mess now." Yeah, we know!

"Everyone considered Jordyn family," they continued. "She was like a family member and always invited everywhere. The family helped her and wanted her to be able to have a business venture too.”

And they didn’t stop there. “Jordyn has been like Kylie’s sister. They were inseparable, and always together,” they said. “Jordyn often helped Kylie with Stormi. Kylie was always so excited to have Jordyn around. It seems Kylie isn’t sure what to do, but it seems impossible for her to keep Jordyn around.”