Doctor Who divided opinion with an episode exploring the dangers of microplastics that pollute the environment.

The programme, which criss-crossed between Peru, Madagascar and Hong Kong, saw people and animals infected by an alien bacteria that fed on microplastics, which are unknowingly ingested by humans.

‘It’s in the air, it’s in your food, it’s in your water,’ the Doctor (Jodie Whittaker) said. ‘Humans have flooded this planet with plastics that can’t be broken down. 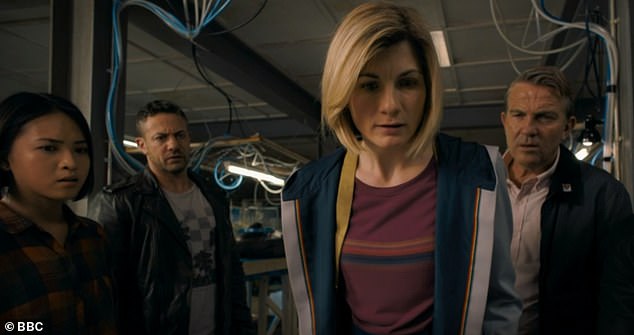 Doctor Who divided opinion with an episode exploring the dangers of microplastics that pollute the environment. Pictured, Jodie Whittaker and the cast in last night’s episode

The messaging divided opinion, with fans coming down on both sides of the argument. Critics claimed the episode was too ‘preachy’ while supporters applauded its relevance

‘So much so that you’re ingesting micro particles whether you know it or not. Poisoning yourself and the planet.’

The messaging divided opinion, with dozens of fans coming down on both sides of the argument.

Critics claimed the episode was too ‘preachy’ and ‘heavy-handed’ while supporters applauded its relevance.

Arguing against the ‘lecturing’ tone of the episode, one tweeted: ‘I enjoyed the episode but it didn’t need the lecture on plastic in it spoiled it you don’t need to preach to make people learn or think.’ 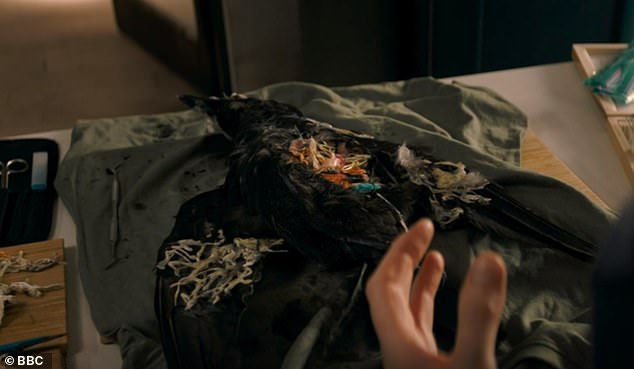 The episode showed birds whose insides were filled with microplastics, pictured

Critics were left furious about the way the issue was addressed in last night’s episode, pictured

Another posted: ‘Not a fan of Terrance Dicks and Barry Letts shoving in this anti-plastic agenda into my escapist, totally non-political #DoctorWho.’

A third wrote: ‘Why does every modern Dr Who episode need to be a protest about climate change or plastics in the ocean? I just want aliens and good adventures.’

However they were shut down by fans who praised the storyline and pointed out that it was a good way to teach the show’s younger audience about the dangers of plastics. 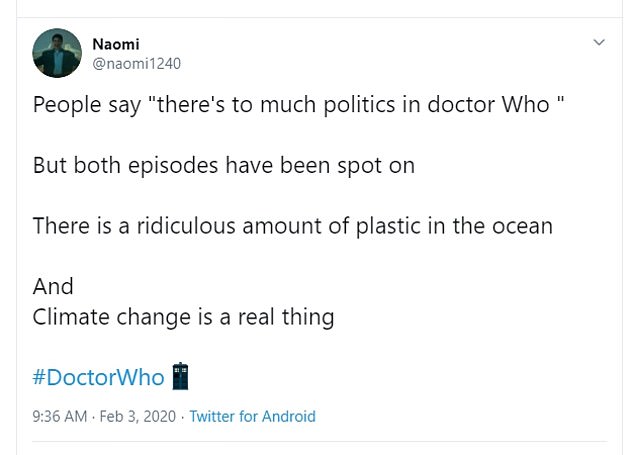 Critics were shut down by fans who praised the storyline and pointed out that it was a good way to teach the show’s younger audience about the dangers of plastics, pictured

One appreciative viewer posted: ‘Frightening birds, poison plastic, something for everyone to do… Tightly plotted and a good, tense watch. That’s a decent #DoctorWho episode if you ask me.’

A second viewer tweeted: ‘I like how you have boomers complaining about the episode bringing knowledge about plastic pollution but people need to know the damage plastic can have on the earth. It’s not propaganda it’s facts that it’s damaging to wildlife.’

A third wrote: ‘Makes me laugh, that some people think that featuring plastic pollution as part of the plot in an episode is being “politically correct” and “a lecture”.’

Others noted they didn’t know about microplastics until they watched the episode.

Doctor Who continues on Sunday at 7pm on BBC1