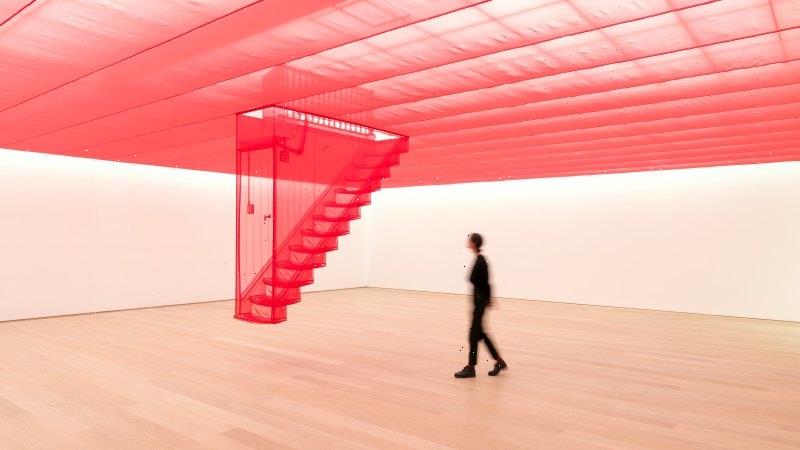 For a man who has made a home and found success across three different continents, Do Ho Suh, strangely, found an enormous sense of relief when the world came to a halt in March 2020.

Suh, 60, has displaced himself time and again during his life. Seoul, New York, Berlin, London. One of Korea’s most prominent artists, he has made his name with large, distinctive fabric works that depict where he has lived, sometimes at their original scale, as well as household appliances including stoves, toilets and radiators.

But the pandemic has made this global wanderer re-evaluate and redefine his relationship with the idea of “home”.

“To be honest, I enjoyed not being able to travel,” Suh says via video link from his home in north London. 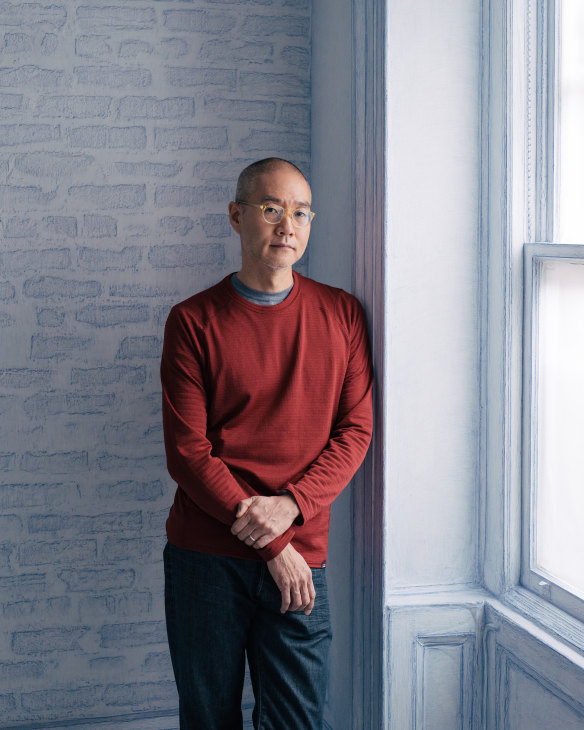 Artist Do Ho Suh with his artwork inspired by his New York apartment, Rubbing/Loving (2016).Credit:Daniel Dorsa.

“Because even before the pandemic started, I thought the world was in overdrive. Things were moving so fast, especially the art world, but also the whole world. There was something very unnatural about what we were doing, you know, especially this sort of intercontinental travel and flights.

“I just thought there was something wrong there. And, also, I’d had enough. Already I wanted to slow it down. But my industry didn’t allow me to do it. So, it was a great opportunity for me to actually stay home in London with my family.”

But Suh’s desire to slow down, reduce travel to help curb global warming, and spend more time with his young daughters, aged 9 and 11, won’t stop his first large-scale solo exhibition in the Southern Hemisphere, at the Museum of Contemporary Art, Australia, opening on November 4.

The exhibition, Do Ho Suh, is a major survey spanning three decades of his work, from the 1990s to the present, and represents one of his most comprehensive projects to date. It will feature emblematic works across a range of media including large-scale installations, sculptures, drawings, printmaking, models and video works. The list includes his ambitious reconstruction of his parents’ home in Seoul through paper rubbings, a hand-stitched staircase and a series of bright interconnected fabric corridors through which visitors can walk. Just don’t call it a retrospective. 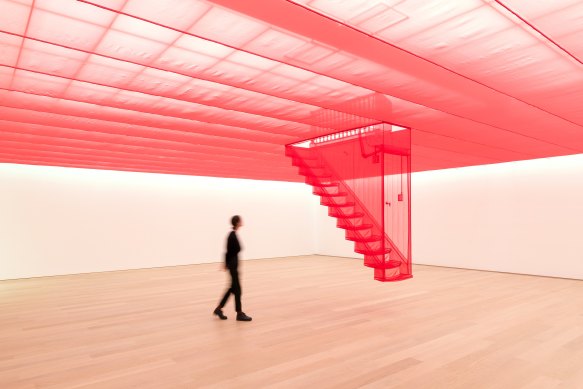 “It was an interesting process for me to actually go through all this work to design the show. And it will be interesting to see these works in one space.”

Suh was a child when he started thinking about the multiple meanings of home. He was born in 1962 in Seoul, the son of renowned artist Suh Se Ok, who led an artistic movement in the 1960s, and Chung Minza, a passionate advocate for Korean culture and heritage.

His father died in his homeland during the peak of the pandemic, although not from the virus. But Suh found out first-hand how hard it was to be removed from loved ones during the worst possible moments in life.

“That was a really difficult part,” he says. “I give all my sympathy to people who lost their loved ones during the pandemic, because of COVID or whatever reason. I totally understand how difficult it could be for some people.”

Having grown up in the regimented Korean society of the 1960s and ’70s, Suh says he for the first time fully understood “Western individualism” when it came to lockdowns in Europe and America. 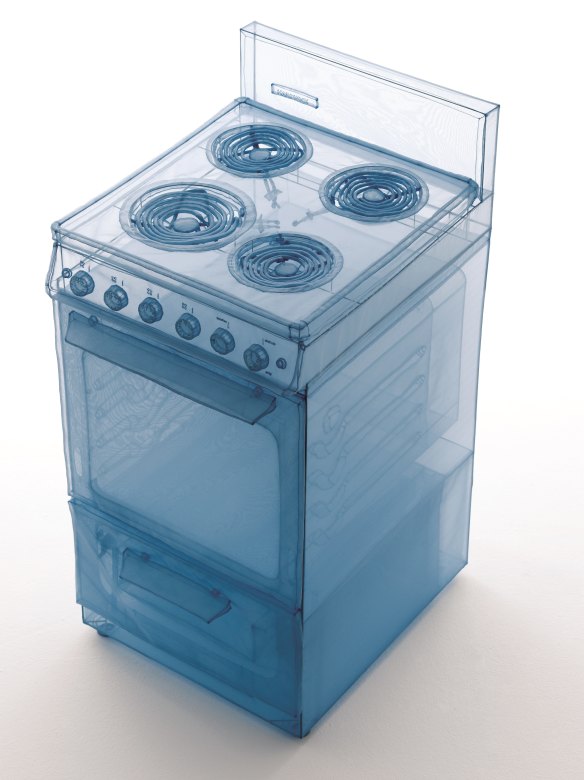 “The way people behaved was completely different here to Korea or Asia. That was quite an interesting moment to see those experiences,” he says.

“The time when I was growing up in Korea was really different from my children’s generation here in London.”

Many of his fondest memories of that home were of his late father, an obsessive gardener, who used to pick all the branches out of his garden every day to ensure it was pristine.

Five years ago, on a footbridge above one of London’s busiest streets, Suh created a replica of his childhood home, complete with a bamboo garden, to be viewed from street level.

His work continues to be an ongoing meditation on notions of belonging, identity and home. They have a distinctive biographical dimension from his childhood and schooling in South Korea to his relocation from Asia, North America and Europe, and the various homes he has lived in as an adult. 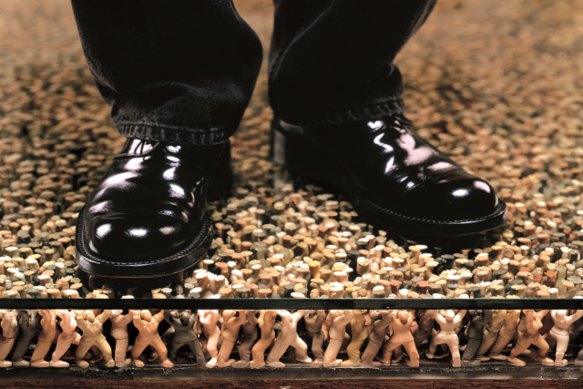 Another is New York City Ground Floor Apartment at 348 West 22nd Street (2016). The life-size installation represents almost any and every single-bedroom apartment in New York with its one living room, bedroom, kitchen and bathroom.

He crafts his works using traditional Korean sewing techniques combined with 3D modelling and mapping technologies. He sees these works as “suitcase homes”, so lightweight and portable that they can be installed almost anywhere.

“It was interesting how, I don’t know how to express this, like, maybe it might be an obsession, or it might be karma, but there’s a certain theme or idea that I have been interested to explore, investigate, and that part hasn’t really changed,” he says.

“I’m interested in the human condition in various circumstances. So, my work comes from my life experience. And so, there are a few threads that’s running through all my work from the beginning to the end.

“That I was able to sort of look back and see. It doesn’t feel like it’s been already that long.”

At his first exhibition at Lehmann Maupin in 1998, Suh covered the gallery’s floor with hundreds of tiny bronze figures with their arms raised, then lay a sheet of glass on top of the Lilliputian crowd. Walking over the sculpture, visitors were literally being held up by the crowd beneath their feet.

The chance to show off his work in Australia came through his long friendship with, Rachel Kent, who was the MCA’s chief curator and is now chief executive of Bundanon Trust.

“I have known Rachel for a long time because I participated Sydney Biennial in the early 2000s,” he says. “I was really green and I had literally just started in my career. But I’m so excited about it, I always wanted to go back there to show the whole body of work.”

Kent, an unabashed fan of Suh’s work, says his work evokes powerful emotions and sits at the intersection of “memory, place and diasporic experience”.

“If the body is a vessel and the home (or artist’s studio) is its container, Suh’s works suggest the traces of a thousand lives lived, with points of intersection and divergence interwoven through,” Kent says.

“Encompassing translucent fabric, thread and rubbings on paper, as well as other, more enduring materials, Suh’s works sit between the collective and the individual – reminding us of our shared humanity, and equally, the fine balance between inner and outer worlds.”

Suh says his children have now become a great inspiration for his work. They’ve even collaborated with him on the exhibition Artland, modelling clay into an imaginary world for Korea’s Buk-Seoul Museum.

“Before, everything was about two generations – my parents and me. Now there are three generations. I’m inspired by being a father. But maybe it’s not so different. Fatherhood, childhood, karma, home – it’s all connected,” he says.

Suh won’t be able to attend the exhibition opening next month, but he hopes to travel to Sydney at some stage while his work is on show. For now, he’s more than comfortable at home.

Do Ho Suh is at the Museum of Contemporary Art until November 4.