Welcome to the Sistine Room Chapel! Crafty homeowner transforms his ceiling with wallpaper of Michelangelo’s The Creation of Adam

This creative homeowner brought the majesty of the Sistine Chapel into his living room by covering his ceiling with wallpaper of Michelangelo’s The Creation of Adam.

Laura Burns, from Warrenpoint, in County Down, revealed how her father painstakingly carved up the wallpaper so it fit between the panels on his ceiling.

She shared the result on the DIY on a Budget UK Facebook group where he was praised for the painstaking project, which put what others had achieve during lockdown ‘to shame.’ 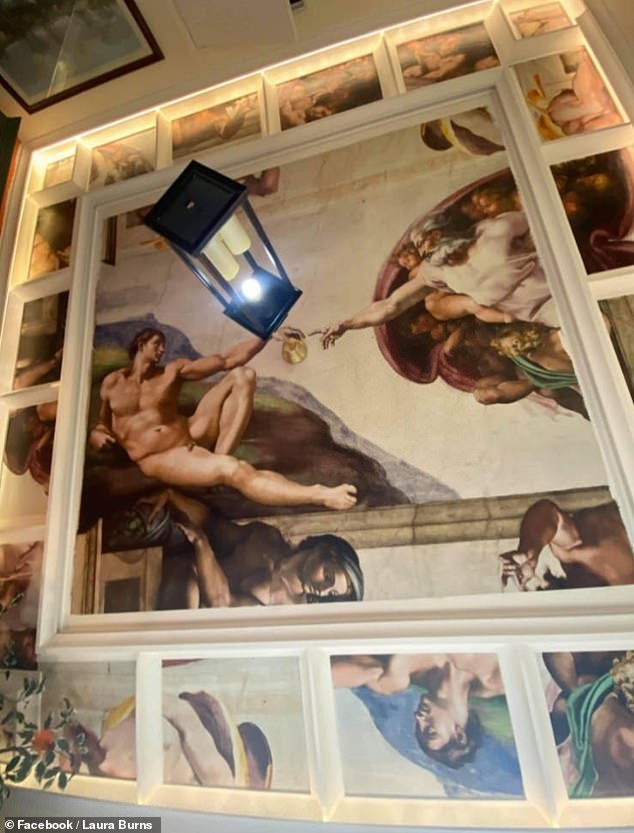 A DIY-wiz from Warrenpoint, County Down, painstakingly fitted a wallpaper of The Creation of Adam by Michelangelo, which can be seen on the ceilling of the Sistine Chapel in the Vatican, Italy

Proud daughter Laura shared the wallpaper on Facebook, explaining her father was hoping to market the idea

‘I think it’s so creative. He is thinking of marketing this, what do you amazing DIYers think… this is my first post  please be nice.’

DIY-enthusiasts were impressed with the beautiful ceiling, and said it put everything they had achieved during lockdown ‘to shame.’

One posted: ‘Oh my goodness, that is just amazing. What a talent.’

Another wrote: ‘Wow this is fantastic, show his work off, get it out there what a talented father you have.’

Joked another: ‘Well that’s put everything I’ve done in lockdown to shame.’

However, some people were untouched by the artistic living-room, with someone commenting:  ‘Some bloke on my ceiling with his k*** out.. Its just not for me,’ said one.

The Sistine Chapel ceiling was painted by Michelangelo between 1508 and 1512.

Central to the ceiling decoration are nine scenes from the Book of Genesis, of which The Creation of Adam is the best known.

People loved the idea, though some said it was ‘not for them’ due to the fact Adam and God were painted nude