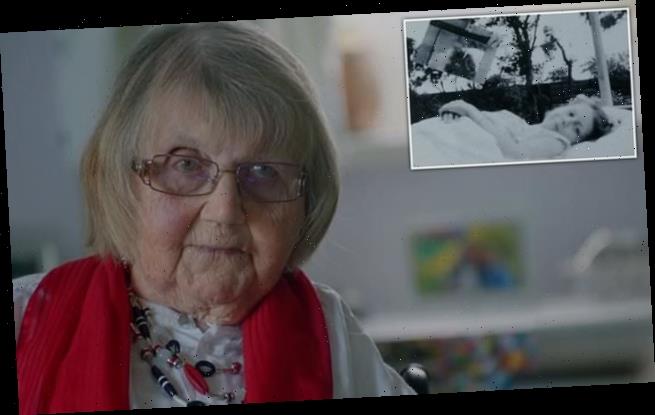 Woman, 82, with rare form of arthritis tells how doctors repeatedly broke her legs aged 4 and caged her in a bed of plaster in a bid to make her ‘perfect’ in documentary examining Britain’s hidden history of eugenics

A disabled pensioner has detailed the shocking medical treatments she underwent as a child, including having her legs repeatedly broken at the age of four.

Ann Macfarlane was born in Norfolk in 1939 and at a young age developed a rare form of inflammatory arthritis called Still’s disease, which causes her joints to swell and stiffen.

Appearing on BBC2 documentary Silenced: The Hidden Story of Disabled Britain, she told host Cerrie Burnell of the brutal methods used by doctors and nurses in a bid to make her body ‘perfect’.

She told how at the age of nine she was forced into a ‘plaster bed’, where she was unable to move and doctors threatened to pour buckets of water over her head if she ‘didn’t stop screaming’. 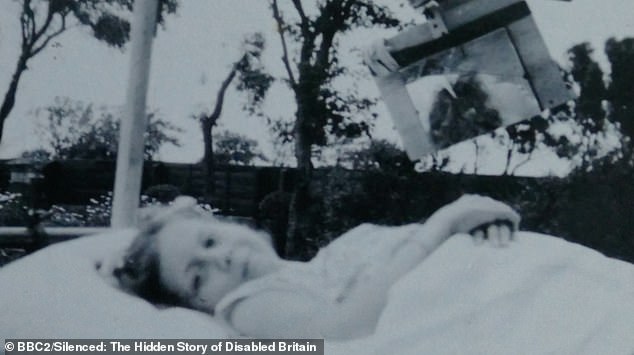 A disabled pensioner has detailed the shocking medical treatments she underwent as a child. Pictured, Ann Macfarlane in a bed made of plaster at the age of nine 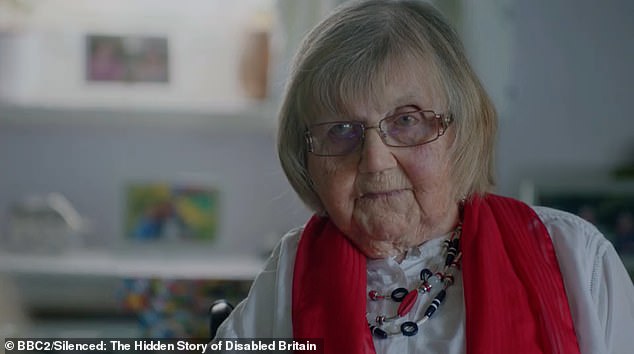 ‘Everything I could ever think of was all to make me more perfect’, said Ann. ‘You were seen as nothing as a disabled person, what good were you?’

The show examines the uncomfortable history of eugenics in the UK, with hospitals such as The Mary Dendy Hospital, founded as the Sandlebridge Colony, set up to keep disabled people segregated from wider society in the early 1900s.

Britain’s public support for eugenics was denounced following the mass sterilisation of 400,000 disabled people with various impairments in Nazi Germany between 1933-45.

However, according to Cerrie, the medical world still saw disabled bodies as ‘problems they needed to fix’, with doctors using shocking treatments in order to try and fix their patient’s physical impairments. 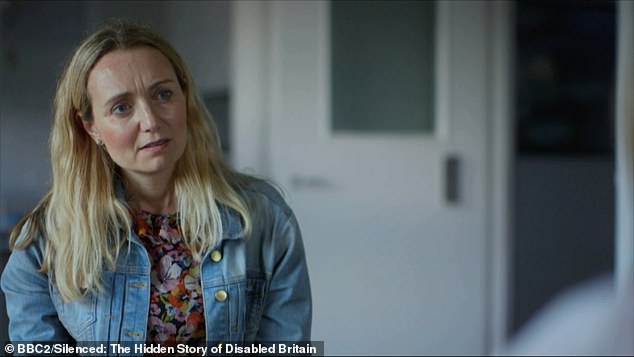 Appearing on BBC2 documentary Silenced: The Hidden Story of Disabled Britain, she told host Cerrie Burnell (pictured)  of the brutal methods used by doctors while she was growing up 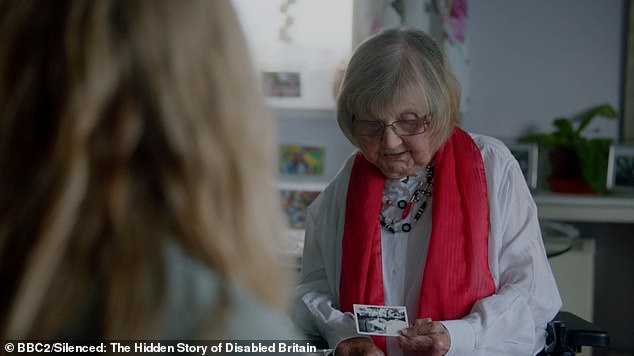 Ann told she was first hospitalised with her condition at four-years-old, and doctors would try and straighten her limbs by breaking her legs and then resetting them in plaster

‘They wanted perfect people, they didn’t want disabled people’, said Ann, ‘They wanted us to be perfect which is why I think I experienced the torment of trying to be perfect, all the treatments were to lead to that.’

Ann was first hospitalised with her condition at four-years-old, and doctors would try and straighten her limbs by breaking her legs and then resetting them in plaster.

What is Still’s disease?

Adult Still’s disease is a rare type of inflammatory arthritis that features fevers, rash and joint pain and affects about 800 Britons.

It is a form of arthritis triggered when the immune system goes haywire, often as an overreaction to a mild infection. It causes widespread inflammation – attacking joints and tissue.

Because the inflammation affects the body’s energy-producing mechanisms, a high temperature of up to 40C and severe exhaustion are common.  Other symptoms include sore throat and swollen lymph nodes in the neck.

‘By the time I was four-years-old I was so ill I went into hospital’, she explained. ‘They could see my knees were bending up and I couldn’t straighten them, my arms were beginning to bend my fingers.

‘So they decided to break my legs and put me in plaster, that was quite a prolonged affair’.

Host Cerrie asked: ‘Every time you had your legs broken and reset they would heal and the same issues would persist and they would break them again?’

When Anne was nine she was forced to lay still in a bed of plaster to try once again to straighten out her limbs, and told how doctors would threaten to throw buckets of water on her if she ‘didn’t stop screaming’.

Anne recalled: ‘By the time I was nine they didn’t know what to do, so they decided I needed complete rest. They made what they call a plaster bed, a statuette of your whole body.

‘They told me to shut up, that they’d throw a bucket of water over my head if I didn’t stop screaming, they had to get the legs as straight as they could to lay in this plaster bed.’

Ann described the pain when she was first forced into the plaster bed as ‘terrible’, and explained how she was unable to move, only able to see her surroundings with a small mirror attached to her bed.

‘You were strapped on to it’, she said, ‘You couldn’t move. You had a mirror over the bed to try and turn it to see what was going on around you.’

Ann told Cerrie that she finds it hard to reflect on her childhood, admitting: ‘Sometimes it’s very difficult for me to think back to that childhood, the pain, the fear I think was paramount. ‘

Elsewhere in the show host Cerrie addresses her own battles with doctors who pressured her into wearing a prosthetic arm.

Cerrie, 39, is an actress, children’s author, and former CBeebies presenter – who in 2009 faced a swathe of complaints from parents, unhappy that their children were watching a woman with one arm on screen. 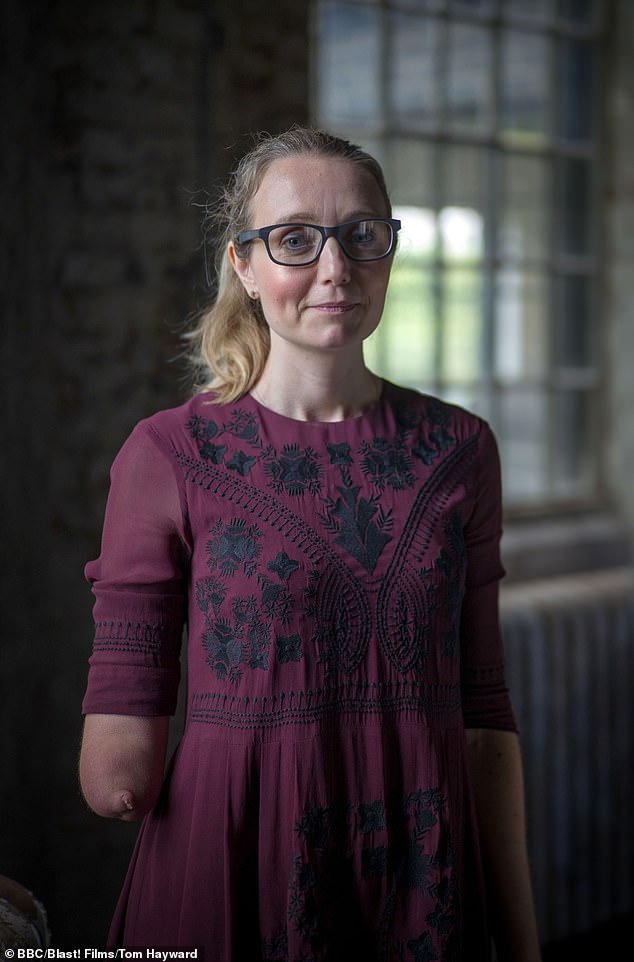 Elsewhere in the show host Cerrie, 39, addresses her own battles with doctors who pressured her into wearing a prosthetic arm

She told that as a child of eight or nine, she was told by a doctor at Roehampton hospital that she ‘might not have any friends’ if she chose not to wear a certain type of prosthetic arm.

‘I remember walking down the corridor and looking up and just seeing hundreds and hundreds of prosthetic legs, just kind of hanging there, just waiting.’

‘The people in the white coats, the people with the power, they had some very firm ides, there was never a choice as to whether I could have the prosthetic or not.’

She was offered a Myoelectric prosthetic, an artificial limb that you control with the electrical signals generated naturally by your own muscles.

Eugenics is the belief that society can be improved by encouraging selective breeding.

Before the atrocities of Nazi Germany, eugenics – the system of measuring human traits, seeking out the desirable ones and cutting out the undesirable ones – was once practiced the world over.

In the decades following the 1859 publication of Charles Darwin’s ‘On the Origin of Species’, the interest in eugenics spread through Britain, the United States and Europe.

Darwin’s theory of evolution created a new interest in genetics and heredity, which fuelled the eugenics movement, with many proponents using his work as scientific justification for eugenics.

In the late 19th century, advocates claimed that wealthier and more sucessful members of society were being ‘outbred’ by the lower classes and the ‘unfit’, and that the human race was at risk of deterioration.

Improvements in medicine as well as charity and centralised governments were blamed for ‘interfering’ with the process of natural selection, as theorised by Darwin, and promoting the survival of the supposed unfit.

Advocates of eugenics during the early twentieth century claimed ‘undesirable’ genetic traits such as dwarfism, deafness and even minor defects like a cleft palate needed to be wiped out of the gene pool.

Scientists would measure the human skulls of felons in an effort to eradicate criminality – whilst other eugenic proponents suggested simply cutting out entire groups of people because of the colour of their skin.

In 1907, the Eugenics Education Society was founded in Britain to campaign for sterilisation and marriage restrictions for the weak to prevent the degeneration of Britain’s population.

Meanwhile from 1907 in the United States, men, women and children who were deemed ‘insane, idiotic, imbecile, feebleminded or epileptic’ were forcibly sterilised, often without being informed of what was being done to them.

In 1931, Labour MP Archibald Church proposed a bill for the compulsory sterilisation of certain categories of ‘mental patient’ in Parliament.

Adolf Hitler was said to have first studied the ‘racial hygiene’ movement during his imprisonment in Landsberg Prison in 1924.

Hitler believed the nation had become weak, corrupted by dysgenics, the infusion of degenerate elements into its bloodstream.

But when it came to enacting Nazi eugenics policy, he was inspired by the United States’ programs of forced sterilisation, especially California’s compulsary sterilisation of citizens suffering from genetic disorders.

After the Nuremberg Laws were passed in 1935, both marriage partners had to be tested for hereditary diseases to preserve the supposed racial purity of the Aryan race.

The Nazis also established a euthanasia programme for those deemed disabled, run from Hartheim Euthanasia Centre.

Victims were initially gassed in buses used to transport them from their homes, but gas chambers were later developed.

A Genetic Health Court was also set up to decide if men and women should be sterilised, on the grounds of diseases including ‘feeble-mindedness’, schizophrenia, manic depression, epilepsy, Huntington’s chorea, genetic blindness, and ‘severe alcoholism’.

After the horrors of World War II, the idea of ‘racial hygiene’ fell out of favour, although prominent figures continued to support the theories of eugenics, including Marie Stopes.

As medical technology advanced, a new form of eugenics has grown in popularity.

Modern eugenics, known as human genetic engineering, sees the alteration of genes to prevent disease, cure disease or improve your body in some significant way.

The benefits of the principle are staggering, because devastating illnesses could potentially be cured.

However, there is a potential cost in modern genetic engineering, because people could potentially eliminate what they consider ‘undesirable’ traits in their children before they’re even born.

Many consider this idea controversial, because what these ‘undesirable’ traits is left open to interpretation.

Prenatal screening could be considered by some as a form of eugenics, as it may lead to abortions of children with certain traits.

Last year, a Chinese scientist called He Jiankui caused global controversy by altering the embryos of twins to make them immune to HIV.

He used the powerful gene-editing procedure CRISPR to modify the DNA of unborn twin girls, nicknamed ‘Lulu’ and ‘Nana’.

In March 2020, a group of international scientists called for a worldwide ban on editing genes to make ‘designer babies’.

Researchers asked for a ban on editing the DNA of living humans because they say there’s a need to slow down the ‘most adventurous plans to re-engineer the human species’.

Gene-editing is a process in which scientists can add, remove or change sections of DNA which ultimately affect how an organism is formed.

In humans, editing them could one day mean manipulating DNA to instruct the body to produce a certain hair or eye colour, or changing those which cause incurable conditions like cystic fibrosis or muscular dystrophy.

Scientists have argued the technology would ‘open the door’ for affluent parents to choose the best qualities and create a new form of genetically modified human.

Cerrie told: ‘Everyone was really excited about this, not me, everyone else. I just went back to having a regular prosthetic that was like a dolls hand and didn’t do anything.

‘I said to a doctor I just don’t want to wear it and he said “The other children might not like it if you don’t wear it, you might not have any friends”.

‘Saying that to a six or seven year old is so poisonously ableist, and I don’t think it was particular to him that was just the attitude at the time.  It was such a quiet victory when I finally didn’t have to wear it.’

Silenced: The Hidden Story of Disabled Britain airs tomorrow evening at 21.00 on BBC2