Kate Middleton is currently one of the most famous royal family members. Not only is she well-known, polls continue to show that many British people love and admire the Duchess of Cambridge.

However, just because she is extremely popular with the public does not mean that she is at the top of the hierarchy in the royal family. In fact, in the eyes of Queen Elizabeth, Duchess Kate could actually be lower-ranking than some “blood princesses.” 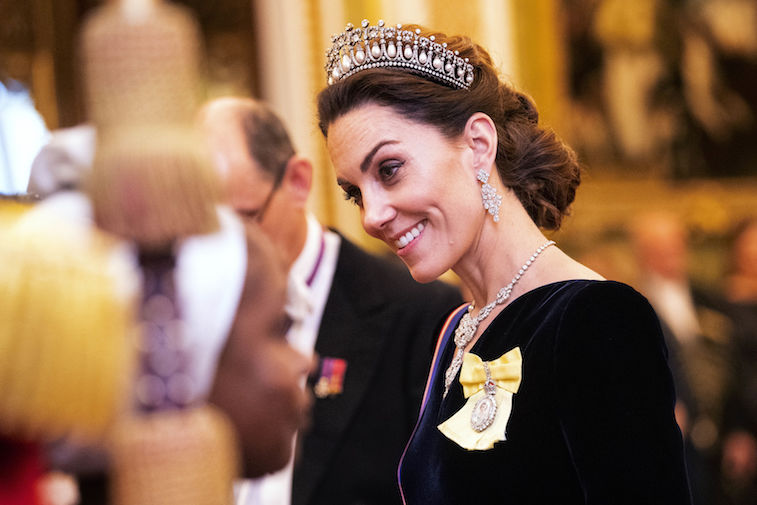 Where does Kate Middleton stand in the royal family?

When Middleton joined the royal family, she took her husband’s title and became Her Royal Highness Princess William, Duchess of Cambridge. Although she is often referred to as the “Duchess of Cambridge,” she technically is a princess just like her late mother-in-law, Princess Diana.

Is there really a hierarchy between the ‘blood princesses’ and Kate Middleton?

While Middleton is a princess and there is no debate surrounding it, she is still just a princess by marriage. In comparison, there are princesses in the royal family who were born into the role, such as Princess Anne, Princess Beatrice, and Princess Eugenie.

According to royal protocol, there is a hierarchy in the family, which takes into account a person’s rank based on their place in the line of succession as well as whether they are royal by birth or marriage. This is called the Order of Precedence, and it determines where one sits/stands at formal events, the order in which people enter/exit, and who must curtsy/bow to who.

An article by the Daily Telegraph in 2012 shared that “the former Kate Middleton, when she is not accompanied by Prince William, must curtsy to the ‘blood princesses’, the Princess Royal, Princess Alexandra, and the daughters of the Duke of York, Princesses Beatrice and Eugenie.

When William is with her, Kate does not need to bend the knee to either of them, but she must curtsy to the Prince of Wales, the Duchess of Cornwall, the Queen and the Duke of Edinburgh.”

The royal family takes the Order of Precedence very seriously

While this sort of protocol sounds old-fashioned to many people, the royal family actually does observe it whenever possible.

The Daily Telegraph wrote: “It is taken very seriously by the Royal Family, whose members bow and curse to each there in public and in private… For example, Camilla was forced to wait in the drizzle outside the Guards Chapel, Windsor, for the arrival of Princess Anne at a memorial service in 2006 because Charles had not accompanied her.”

The Order of Precedence is taken so seriously that some marriages have been known to upset a few people because of certain changes that might be made.

For instance, it was alleged that Sophie, Countess of Wessex (who married Prince Edward in 1999), was a bit peeved when Camilla Parker Bowles married Prince Charles in 2005 because Camilla would now outrank Sophie in precedence.

Where does Meghan Markle fit into the hierarchy?

Meghan Markle married Prince Harry, who is currently sixth in line to the throne, which means that she is not as high in the Order of Precedence as Kate Middleton. Essentially, Markle has to curtsy to more people and enter an event later than Middleton.

Fans also saw this play out back in November at the Remembrance service. Queen Elizabeth, Kate Middleton, and Camilla Parker Bowles all stood together on the same balcony, but Markle stood somewhere else with the Countess of Wessex.