While relations between the Trump administration and the British royal family have been almost entirely cordial, you’ll see speculation about friction between the two parties during every interaction.

During a June 2019 Trump visit to the UK, observers couldn’t stop talking about Prince Harry’s supposed snub of the U.S. president. In December of the same year, people pointed to Princess Anne’s actions toward Trump at Buckingham Palace, suggesting another snub.

When Prince Charles and Vice President Mike Pence both attended a World Holocaust Forum event on January 23, 2020, many spotted what they believed to be a snub of Pence by the Prince of Wales while greeting various dignitaries and heads of state.

Though the video does show Prince Charles bypassing Pence in the main room, a photo and video from the Holocaust memorial event showed the two interacting in a respectful way.

Prince Charles passed straight by the Pences at the forum 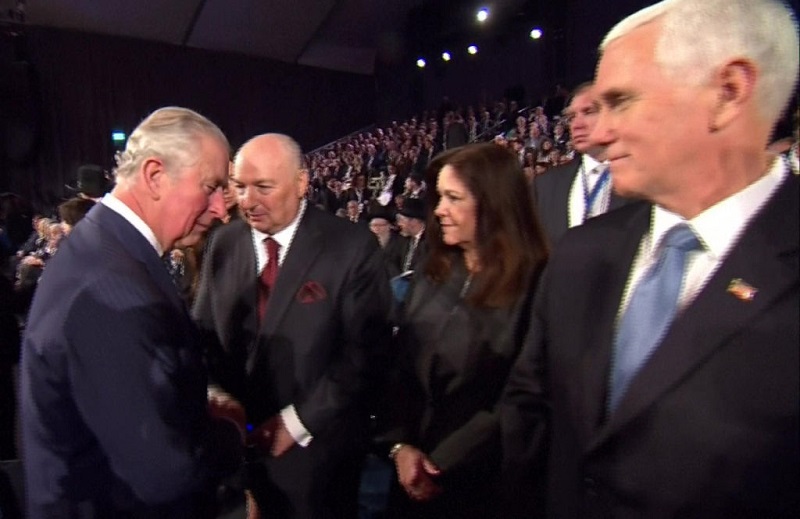 Going by the video, it’s clear Prince Charles noticed Vice President Pence and his wife before neglecting to shake hands with them. Moments before, the prince was shaking hands and speaking with other dignitaries in the row.

Charles then greeted Israeli Prime Minister Benjamin Netanyahu, seated to Pence’s left, immediately after. The prince continued to greet other dignitaries (including French President Emmanuel Macron) further down the row.

Despite the apparent snub, Pence’s press office and Buckingham Palace representatives both denied Charles ignored Pence on purpose. And the vice president’s office released video of the two interacting.

Pence’s press secretary released footage of the VP and Charles

Soon after the video circulated online, social media users began sharing it and commenting on the apparent snub with a wide range of reactions. However, representatives for the royal family and Pence both pushed back against the characterization there was any snub.

Katie Waldman, Pence’s press secretary, released a photo of the two sharing a laugh at another point during the event. Waldman described the rumor of snub as “not true.”

Reps for Buckingham Palace also sought to quiet down any talk of a snub by the prince. In a statement to the BBC, a royal family spokesperson denied any such ill intention on Charles’s part. The rep added that the prince and Pence had a “long and warm conversation” before the ceremony began.

After releasing a photos of Pence and the prince smiling together, the VP’s press shop released a video (without sound) of the two speaking to one another for about 30 seconds.

In that interaction, Charles nods at Pence’s statements and greets Mrs. Pence. After saying a few words, the prince then turns away from the couple and speaks to someone behind him.

Also see: The Assassination That Shook the British Royal Family 40 Years Ago