Almost one in three students expelled from Victorian government schools during the first year of the pandemic had a disability, up from one in seven the previous year, in a pattern of exclusion that youth disability advocates warn is merely “the tip of the iceberg”.

The official number of student expulsions fell to 68 in 2020, the lowest number in a decade, as most students spent well over 100 days learning remotely. 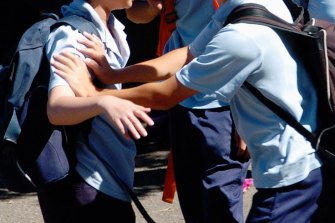 The official number of student expulsions fell in 2020, but the drop was not matched by a large decrease in expulsions among students with a disability.Credit:Janie Barrett

Data for the 2021 and 2022 school years has not been published, but Association for Children with a Disability chief executive Karen Dimmock said she did not believe the high proportional figure was an anomaly.

“We expect it to be worse this year,” she said. “Every time students have gone back to school following a lockdown period, we have seen both formal and informal exclusions increase.”

Dimmock said COVID-19 had the combined effect of putting schools and staff under more pressure so they were often less responsive to disabled students’ needs, and of heightening anxiety and difficult behaviour among students with a disability.

“Students often find transitions stressful and difficult, and most students with disability find that even more difficult,” she said.

“And staffing pressures have resulted in less communication between schools and families.”

Informal exclusions could take many forms, she said. For example, a student who has a behavioural incident will be taken out of school, then return on reduced hours.

“It’s deeply concerning and often doesn’t come with a plan to increase that attendance,” she said.

Dimmock said expulsion can have a “devastating impact” on a student’s education.

“For students who are expelled officially, normally it is a responsibility for the principal to assist that family [to] find another school for them, but obviously that can be very difficult.”

One veteran principal, who spoke anonymously due to the sensitivity of the subject, said mainstream schools often struggle to accommodate students with significant behavioural problems.

“The end result is those students figure more prominently in expulsion and suspension data. It’s not because kids with disabilities are being picked on. Sometimes it just doesn’t work,” they said.

Principals’ Association of Specialist Schools president Cameron Peverett said students with disabilities tended to thrive on routine and many had been unsettled by transitions in and out of remote learning in the past two years.

“Over 50 per cent of students who are funded for disability would be in the mainstream [school] setting,” Peverett said. “Those kids … tend to struggle with changes to their routine and I imagine in a mainstream setting it takes a certain level of creativity and doggedness to make sure you are able to provide reasonable adjustments to all students in your class,” he said.

“In a lockdown it probably wouldn’t take much to not get that right.”

Expulsions have reduced in number in Victorian government schools since mid-2018, when a new ministerial order gave parents, carers and students new grounds to appeal to an independent panel. The reform came after Victoria’s Ombudsman released a report that was critical of the expulsion process in schools, finding a disproportionate number of affected students had a disability, were living in out-of-home care or identified as Aboriginal and Torres Strait Islander.

Australian Principals Federation president Tina King said expulsions were “the end point of a very long road” after all other options to support or intervene had been exhausted.

“Principals have a duty of care to everyone in the school and at times, if the behaviour and conduct of someone puts others at risk or threat, be it students or staff, difficult decisions need to be made,” she said. “Sometimes you have got to look at whether the particular setting is the right setting for the child.”

An Andrews government spokeswoman said expulsions are always a last resort, and in the few instances where they are necessary, students are supported to find an alternative educational setting and transition as soon as possible.

“There has been a 25 per cent reduction in the number of students with disability expelled since the beginning of the pandemic,” the spokeswoman said.

Mija Gwyn, manager of the Youth Disability Advocacy Service, said the organisation was “concerned about the very high proportion of disabled students who are being expelled from their school, as this shows that disabled young people are being denied their right to education”.

Gwyn said the advocacy service’s COVID-19 youth advisory group heard that many disabled students received too little support to participate in their education on an equal basis with non-disabled peers during periods of remote learning.

“In situations where young people are not expelled or suspended, disabled students have still reported that they have often discontinued their education due to the stress associated with disability discrimination perpetuated by their education providers,” she said.