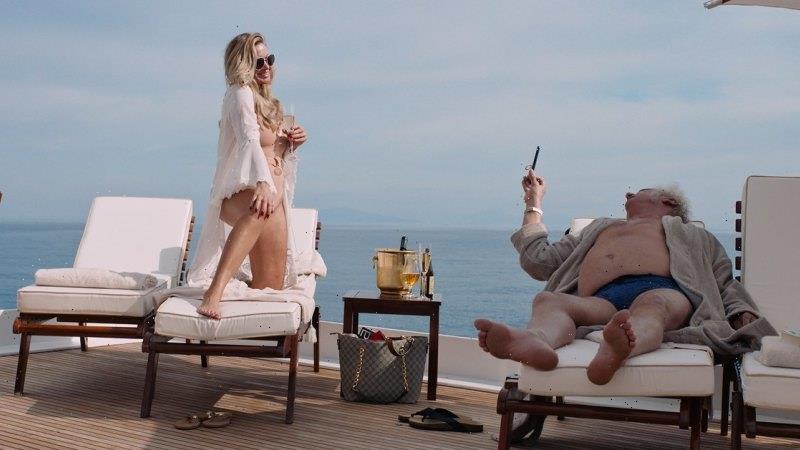 Whoever decided to release Triangle of Sadness at Christmas time in Australia must have a sense of humour as wicked as that of the movie itself. Written and directed by the Swedish filmmaker Ruben Ostlund, Triangle is a bracing movie, but it isn’t your standard holiday fare. When it premiered at Cannes earlier this year, it won the Palme d’Or, and got an eight-minute standing ovation. It also prompted some audience walkouts, for reasons we’ll get to.

I knew I was going to love the film after an early scene set at a fashion parade. Before the event begins, an usher rudely evicts some audience members from the front row, even though their tickets prove they’re in the right place. Once these plebs have been removed, a party of ticketless fashion-world celebrities is fawningly escorted to the vacant seats. Then the models start strutting down the catwalk, in front of a big slogan proclaiming the event’s theme: We’re All Equal.

Triangle of Sadness is a rare beast: an aggressive and grown-up social satire, with a fully functioning brain and fangs. Clearly, Ostlund is fed up with the shallow, self-congratulatory world of Botox and Instagram, and he wants to give it a salutary kick up the arse. He’s got the kind of crankily irreverent sensibility you still occasionally encounter in literature, if you’re lucky, but almost never at the movies. At times his film assaults your senses, but it never insults your intelligence. 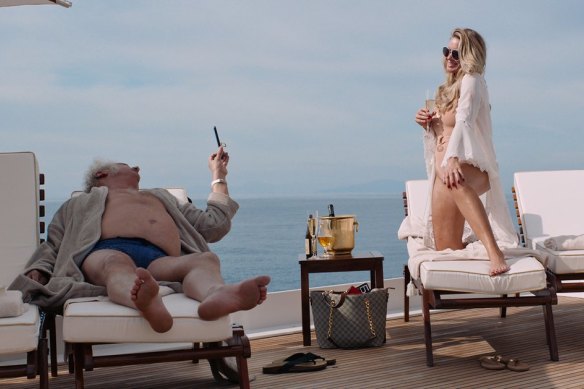 The Triangle of Sadness is a rare beast: a grown-up social satire with fully functioning fangs.

In the opening act, we meet a couple of young fashion models: Carl, played by the English actor Harris Dickinson, and Yaya, played by the South African actress Charlbi Dean, who died unexpectedly a few months after the film’s triumph at Cannes.

Carl and Yaya have used their good looks to build a sideline career as online influencers. In that capacity they’ve scored free tickets to go on a luxury cruise with various representatives of the global financial elite: a Russian fertiliser magnate, a Nordic app-coder, a couple of elderly British arms dealers. The only American on board is the ship’s drunken captain, played by Woody Harrelson.

This is the part that prompted the walkouts at Cannes. You can see why. Until now, the Mr Creosote scene in Monty Python’s Meaning of Life has been the benchmark for over-the-top cinematic regurgitation. The stricken diners in Triangle of Sadness make Mr Creosote look like an underachiever. Nor is seasickness their only plight. Some food poisoning seems to be in the mix too, since seasickness alone would not produce the full range of gastric calamities that Ostlund outrageously depicts. 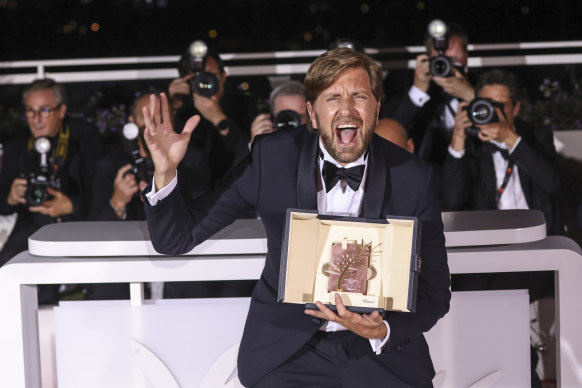 Triangle of Sadness director Ruben Ostlund poses with the Palme d’Or at the Cannes Film Festival.Credit:AP

“Maybe I did go too far,” Ostlund has said of his chundering sequence. “But I wanted to.” That could be the mantra of any self-respecting satirist. Decent satire should go too far; it should use bad taste in a good cause. Ostlund wants to remind us that no matter how rich or good-looking we are, we’re all just mammals, and all subject to the same humiliating bodily laws. All good satire has a levelling effect, and nothing is more deflating to human self-regard than a serious gastric emergency.

There are subtler moments in Ostlund’s film, but the barfing sequence is the part that people will remember and talk about. The rest of the film merely engages your intellect. The barfing sequence makes you feel Ostlund’s moral disgust at a gut level. It uses gross-out humour to make a serious ethical point.

Here Ostlund is participating in a tradition that goes back at least as far as the 1500s, when Rabelais wrote his earthy epic Gargantua and Pantagruel. That novel recounted the bawdy exploits of a family of French giants, and it laid heavy stress on the body’s baser functions, including vomiting, which Rabelais called “skinning the fox.”

The Russian critic Mikhail Bakhtin coined a great name for the literary mode that Rabelais more or less invented: he called it “grotesque realism.” The Rabelaisian approach caught on fast in English literature. Shakespeare was a Rabelais fan. The corpulent, wine-guzzling Falstaff is a palpably Rabelaisian figure. And when Iago talks about “making the beast with two backs,” he’s quoting from Gargantua and Pantagruel.

Jonathan Swift, the most famous satirist in our language, was a master of politically charged dunny humour. In Gulliver’s Travels (1726), Gulliver visits the island kingdom of Lilliput, where the locals are only six inches tall. When the royal palace catches fire, the Lilliputians fight the blaze with thimble-sized buckets of water. Fortunately Gulliver has a full bladder, so he whips out his privy member and hoses the palace with urine, “which I voided in such a quantity, and applied so well to the proper places, that in three minutes the fire was wholly extinguished.”

A few years after he wrote Gulliver’s Travels, Swift’s satirical imagination went to the other end of the human digestive tract. In his pamphlet A Modest Proposal, he floated the idea of easing the burden on Ireland’s poor by feeding their children to the rich.

Satire can be an ugly orm, if the satirist is angry enough. Joseph Heller’s anti-war novel Catch-22 (1961) had the soldier in white – a maimed serviceman lying mutely in a hospital bed, encased in plaster from head to toe. A jar of fluid drains into him via a tube attached to his elbow; another jar near his groin collects his waste. When that jar is full and the other one empty, they are switched. The soldier in white is just a body, in the starkest possible sense. He’s a vessel for consuming and expelling fluids. He may not even be alive.

A few critics of Triangle of Sadness have suggested that the movie isn’t much chop, because it takes aim at barn-sized targets like Instagram and financial inequality. So what if Ostlund dislikes those things? these critics say. Who doesn’t? 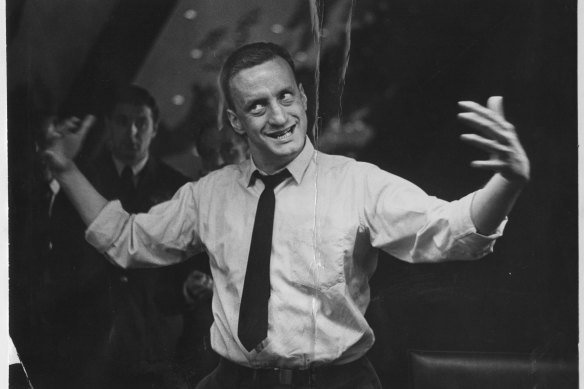 But the best satirists have always taken aim at barn-sized targets. War. Religion. Human folly. It isn’t the size of the target that matters. It’s the inventiveness of the execution.

Stanley Kubrick’s Dr Strangelove (1964) is one of the greatest satirical movies ever made. The target of its ridicule was nuclear Armageddon – and who wasn’t against that? The most resonant scene in Kubrick’s film was the last one, where Slim Pickens rides the descending nuke as if it’s a bronco. It wasn’t the best-written or best-performed scene in Strangelove, but it was the moment that conveyed the film’s rage most eloquently.

Swift said that satire is a sort of mirror, “wherein beholders do generally discover everybody’s face but their own.” Clever satirists can get away with a lot. At the height of the Vietnam war, no Hollywood studio was going to bankroll a film that ridiculed that conflict directly. So Robert Altman made M*A*S*H (1970), which was set during the Korean War, but was plainly about the insanity in Vietnam.

Altman opposed that insanity by making his film as earthy as possible. Surgical scenes that set a new benchmark for on-screen gore were juxtaposed with shower-block pranks that broke new ground in the depiction of nudity. M*A*S*H was also the first American studio picture to feature the f-word. Admittedly, the shock value of that particular coup has worn off. 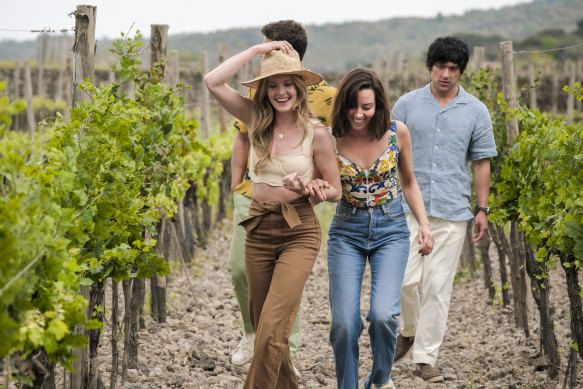 The White Lotus’ Americans are so decadent and morally lost that they make you wonder if their culture is in terminal decline.

Not that satire always has to shock you. The White Lotus, the second series of which recently wrapped up on Binge and Foxtel, was billed as a satire. But Mike White, the show’s creator, is a very gentle kind of satirist. In Triangle of Sadness, Ostlund’s finger is always on the scales. Sometimes his whole fist is on there. White’s brand of satire is far more hands-off.

Like the first series, the second series of The White Lotus dealt with a bunch of American tourists behaving badly at a foreign luxury resort. The only central character to appear in both seasons was the insufferable Tanya McQuoid, played by Jennifer Coolidge.

Tanya is an American grotesque – hyper-rich, self-absorbed, and staggeringly uncultured. She’s so cartoonish a character that she sometimes seems to have strayed into the show from the nearby set of a far broader comedy. But really she serves as White’s satirical lynchpin. She’s his version of the barfing scene – the big gaudy effect at the show’s centre, whose impact allows him to make subtler points in the surrounding storylines.

On the whole, White’s Americans are so decadent and morally lost that they make you wonder if their culture is in terminal decline. But Mike White is part of that culture too, and as long as America can still produce entertainment as edgy and self-aware as The White Lotus, it would be premature to write the place off.

This is the paradoxical thing about satire. It tends to flourish at precisely the moment when everything else is going to pot. When a filmmaker spends 15 minutes showing people voiding the contents of their stomachs in all directions, it seems safe to say that his society is not in the best of health. The consolation is that satire may now be entering one of its golden periods.

In the early 1960s, the great English comic Peter Cook opened a satirical venue in London called the Establishment Club. The place was modelled, he said, on “those wonderful Berlin cabarets that did so much to stop the rise of Hitler and prevent the outbreak of the Second World War.”

In other words, even the best satirists can’t change the world. All they can do is show us how comically awful it is. If things are going to get any better, that’s up to the rest of us.

The Booklist is a weekly newsletter for book lovers from books editor Jason Steger. Get it delivered every Friday.