Exploring the Bonnefanten Museum's David Lynch retrospective in Maastricht, Someone Is in My House, one starts to conjure an image of Lynch's hands: they must never stop moving.

The American filmmaker known for macabre, enigmatic films such as Eraserhead, Blue Velvet and Mulholland Drive, as well as his recently revived hit 1990s supernatural crime TV series Twin Peaks, seems to have a manic creative drive that has compelled him to explore every conceivable form of art: paintings, lithographs, black-and-white photographs, drawings, comics, collage, sculptures, stop-motion animation and even anthropomorphic design lamps. 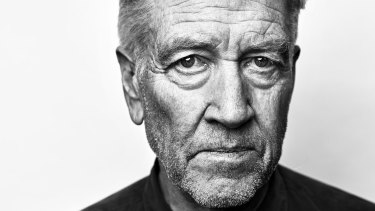 "Yeah, I love to work," Lynch said in a telephone interview from Los Angeles, where he lives and has his studio. "Every medium is so beautiful but each in their particular way, and you learn about them by getting in there and working with them and talking with them."

More than 500 of Lynch's artworks are on display in the sprawling exhibition, which runs until April 28. A smaller version of the show will travel to HOME, a cultural centre in Manchester, England, where it opens on July 6. 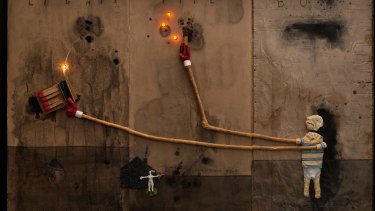 Painting was a first love for Lynch, who studied at the School of the Museum of Fine Arts, Boston, and at the Pennsylvania Academy of the Fine Arts in Philadelphia. "First of all, I only wanted to ever be a painter, but painting led into filmmaking," he said. "So I feel like I'm a painter and a filmmaker and I'm also into music. I always say, I go where the ideas take me, and that's sort of how it is."

He has been showing his work for several decades, with solo shows at the Leo Castelli Gallery in New York and at galleries in France, Spain and Japan; in 2007, the Fondation Cartier pour l'art contemporain in Paris hosted David Lynch: The Air Is on Fire, which Lynch said "opened up a bunch of doors". In 2015, the Queensland Art Galley staged the popular David Lynch: Between Two Worlds exhibition of paintings, photography and works on paper.

"The exhibition at the Bonnefanten Museum is a tour de force in extending the visibility of Lynch's fine art practice," said Bill Griffin, a co-founder of the Kayne Griffin Corcoran gallery in Los Angeles, which has represented Lynch since 2011.

The works range from tiny – a series of drawings inside matchbook covers – to monumental, and from childhood sketches to mature paintings, so it functions, in a way, as a glimpse inside Lynch's mind. 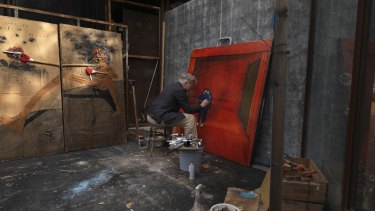 David Lynch at work in his studio.Credit:DAVID LYNCH

It is tempting to read almost everything in the exhibition as either a precursor to, or an outgrowth of, his moody, violent and graphic film and television work. A student graphite drawing on paper seems to be a sketch for the main character of Eraserhead; the large mixed media on canvas work, Bob Loves Sally Until She Is Blue in the Face, could be a reference to Bob, a character in Twin Peaks.

"Sometimes they kind of cross-pollinate, but mostly they're their own thing," Lynch said. "I don't think I can give you an example of a painting that led to a film or a film idea, but in a way it has happened. 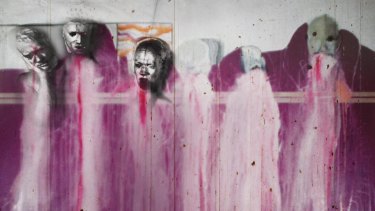 "There are some rules in painting that apply kind of obviously to filmmaking, like colour and composition and stuff like that. But all these things, they're their own thing, really."

The works on display are organised semi-chronologically, with the earliest a childhood painting of a house, with trees and insects, from 1952, when Lynch was six years old. The painting is in part the inspiration for the exhibition's title, said Stijn Huijts, the museum's director and curator of the exhibition. 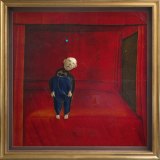 "Already as a kid he would ask himself, with these beautiful houses, what's going on behind the facades?" Huijts said. "That's really very Lynchian because he has a fascination with things that are under the surface, the fourth dimension, things we don't know, the subconscious."

One photograph, a print from 2013, seems to sum up Lynch's imagination: Head #11, an outline of a head filled with storm clouds and lightning. There's a lot of disgorging going on in these artworks; human forms are distorted into suggestive shapes; much of the imagery involves sexual violence or arson. It's easy to notice references to the twisted bodies of Francis Bacon, an early influence, and the art brut aesthetics of Jean Dubuffet.

David Lynch’s Someone is in My House, 2014, lithograph, courtesy the artist and Item Editions.Credit:Bonnefanten Museum

Griffin said that the artist's primary influences were, indeed, "Bacon from a visual and theatrical point of view, but conceptually more in line with Ernst, Duchamp, Man Ray", some of the pioneers of dada and surrealism.

Given the darkness of his imagination, one wonders about its origins. Lynch lived in several states while growing up and said that he had "a wonderful, happy childhood, incredible". It was when Lynch lived in Philadelphia, while an art student, that he discovered what he calls "the contrast" that fed the darker side of his imagination, he said. "I always say that the city of Philadelphia was my biggest influence."

"There was this black patina over almost everything like coal dust," he added. "There was fear in the air, there was corruption, there was violence, there was insanity in Philadelphia. The rooms in the buildings were painted with a certain kind of green, with this dark wood and staircase railings, bricks and big casement windows, narrow streets, and this thick atmosphere of negativity."

His student artworks displayed in the first rooms of the exhibition express the sense of gloom, including his first "moving picture", made in 1967, Six Men Getting Sick (Six Times), a 16-millimetre experimental short film projected onto a sculptural panel of six disembodied heads vomiting repeatedly, now a digital projection.

In the final room, monumental multimedia paintings are presented in large gilded frames behind glass and incorporate materials such as cardboard, fabric and knives.

The Bonnefanten has recently acquired his Boy Lights Fire, from 2010, an image of a bald boy in white underwear with uncannily long arms, striking a match against a matchbook. The sparks are orange light bulbs.

Lynch is now 73, and he's still making TV programs and films, and still creating work in the studio.

His work "never stops", Huijts said. "He has to create constantly."

Lynch said that painting had been a little difficult in early March, "because I paint outdoors and it's been really cold in Los Angeles lately". But still, "I am working on two small paintings, and I'm building a lamp and I'm trying to catch ideas."