An attorney for New York Governor Andrew Cuomo attempted to refute the accounts of two women who have accused the governor of engaging in a pattern of sexual harassment. The attorney, Rita Glavin, also accused state investigators of conducting an unfair investigation into the claims.

“The governor deserves to be treated fairly and he must be. That did not happen here. This was one-sided. And he was ambushed,” she said in a news conference.

Glavin said investigators with the New York Attorney General’s office failed to conduct an “open-minded” inquiry and accused them of acting “as prosecutors, judge and jury.” She also attempted to dispute a timeline given by an unnamed accuser, identified as “Executive Assistant #1” in a recent report on the investigation.

Speaking to investigators, the assistant described instances where the governor behaved inappropriately, including in an alleged incident reported to police. “The Governor, during a hug, reached under (her) blouse and grabbed her breast,” the report says.

The claims were initially made to an Albany newspaper, the Times Union. Glavin claimed there was evidence, including emails and other documents, that undermined the credibility of her account and claimed the evidence was not included in the report. “This woman’s story as stated in the report is false,” Glavin said. 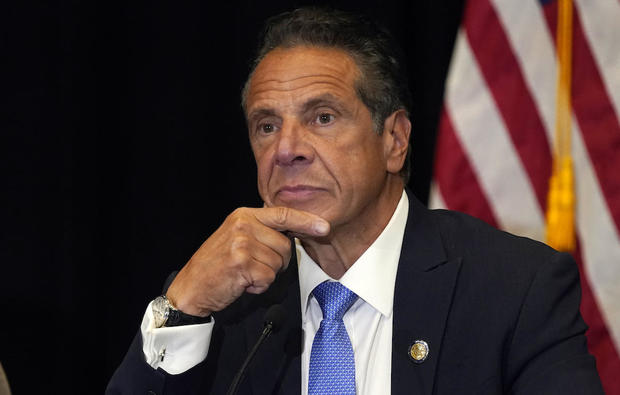 Glavin also refuted claims made by Lindsey Boylan, a former special advisor to the governor who said Cuomo made a series of inappropriate comments about her appearance, “including saying to her once on a plane, words to the effect of, ‘let’s play strip poker,’ “physically and “kissed her on the cheeks and, on one occasion, on the lips.”

Glavin said four witnesses denied the strip poker claim and accused Boylan of leveraging the allegations for her campaign for Manhattan borough president.

Later Friday, Boylan responded on Twitter: “We will not be intimidated.”

In a statement, an attorney for two of the accusers, Alyssa McGrath and Virginia Limmiatis, said Cuomo’s attorney failed to discredit the claims. “Cuomo’s lawyers try to pick at minor issues without addressing the numerous other witnesses, facts and evidence which support both Ms. Boylan and Executive Assistant No. 1, much less the 9 other women who were found to credible who reported his unlawful behavior,” the attorney said in a statement.

Glavin and Paul Fishman, an attorney for the governor’s Executive Chamber, also accused investigators of failing to provide them with materials and transcripts they say they need to craft a rebuttal. Fishman claimed he requested early access to the attorney general’s report but was denied.

The report, which was released Tuesday, immediately led to calls for Cuomo’s resignation or impeachment. Glavin said Cuomo will cooperate with impeachment proceedings.

In a statement, the office of Attorney General Letitia James said Cuomo’s attorney attempted to undermine the investigation and said interview transcripts would soon be made public.