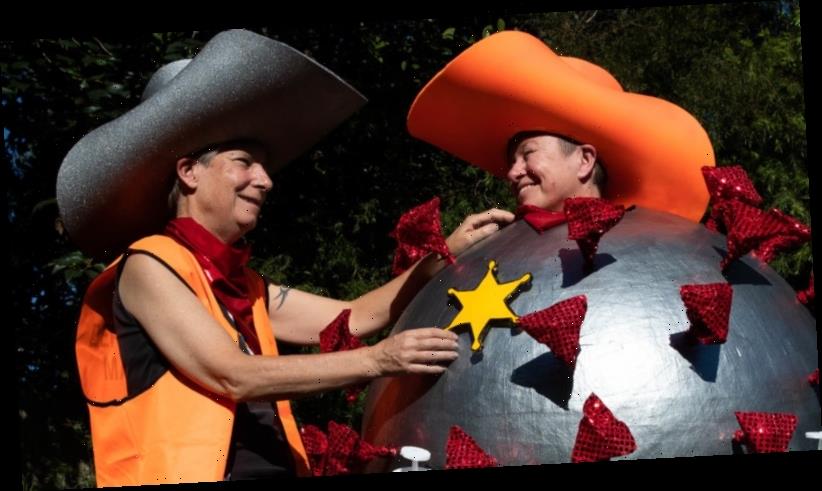 As a doctor in Sydney’s public hospitals, Jenny Mann does everything in her power to protect people from COVID-19. But in the privacy of her home, she and her friends have spent hours creating giant coronavirus particles.

“We’ve all been madly paper mache-ing and cutting up foam and sticking on sparkles,” Mann says of these oversized props, which form part of a float she has built for the Sydney Gay and Lesbian Mardi Gras on Saturday. A tribute to Australia’s COVID marshals, the float includes cowboy-style officers who wield vaccination syringes instead of guns. 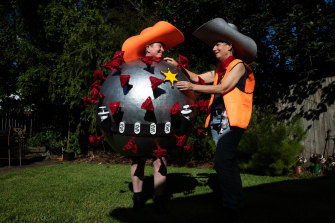 “We spent a whole year reading about coronavirus deaths and lockdowns and other terrible things in The Sydney Morning Herald,” Mann says. “We wanted to acknowledge that this year has been awful – but also that our health services have done so well to get COVID under control and that we will get through this.”

Since 1997, Mann and her partner of more than 30 years, barrister Kathy Sant, have participated in nearly every Mardi Gras parade. Once, they built three pink Daleks for a float called “Exterminate Homophobia”; another time, they collected plastic water bottles from a post-parade dance party and turned them into a Marie Antoinette-style gown.

This year, Mann’s float is one of a dozen inspired by the challenges of COVID-19. In what promises to be a particularly contemporary parade, there are floats designed by environmental group Extinction Rebellion, NSW’s Fire and Rescue Services, and one featuring former US president Donal Trump in a nappy.

“These changes came about because our communities fought very hard for them.”

In previous years, crowds of more than 300,000 lined Sydney’s Oxford Street to watch the parade. To comply with social distancing requirements, this year’s event will be held inside the Sydney Cricket Ground, where a maximum of 33,000 spectators will be admitted.

“Oxford Street is obviously the spiritual home of the Mardi Gras,” says Josh Martin, SBS’s commissioning editor of entertainment and food. “But from a broadcast perspective, it’s technically difficult for us to pull off. When the Mardi Gras first sounded us out about the idea of doing it in the SCG, we were incredibly excited … when you see all the parade participants emerge into the stadium, it’s going to be really special.”

To protect the SCG’s hallowed turf, there will be no floats on flatbed trucks; instead, parade participants will focus on costumes, puppetry and inflatable props.

Martin believes this will lend a more intimate feel to the event.

“Mardi Gras has always been about the personal stories of the people marching in the floats,” he says. “I’m excited to see the creative solutions that people come up with.” 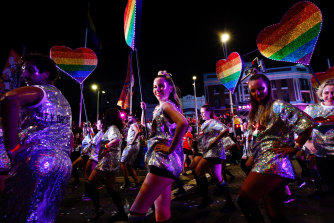 The 2021 Mardi Gras has moved from Oxford Street to the SCG to accommodate COVID-19 restrictions.Credit:Dean Sewell

Despite a smaller-than-usual crowd, Martin has no plans insert pre-recorded cheering or computer-generated spectators into the broadcast.

“We won’t need it,” he says. “The joy and exuberance of the people who are there will absolutely come through on the screen.”

For Mann, the parade is a chance to acknowledge the progress that Australia’s LGBTQI+ community has made over the past few decades.

“There’s a lot of work still to be done, particularly on transgender issues,” she says. “But it’s not that long ago that homosexuality was illegal in Australia, or that people had no right to visit their partners in hospital. It’s important to remember that all the changes that we’re celebrating didn’t just happen – these changes came about because our communities fought very hard for them.”