An amorous couple has rekindled their crumbling romance after they both underwent a special course of therapy – to enjoy group sex with other people.

Lucy Jones, 32, and 36-year old Lukasz Reucki feared their relationship would end after she introduced him to threesomes involving men and women – and they kept comparing themselves to their bedroom companions. 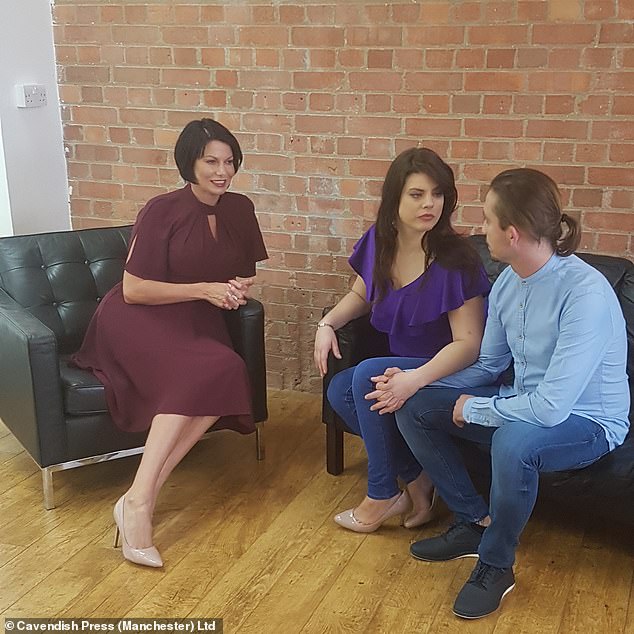 Now the couple, from Crystal Palace, South London has since enjoyed group sex with another man and both say the experience was ‘much better than before.’

Lukasz, a gardener, said: ‘I didn’t compare myself to the other person once. I loved watching Lucy being pleasured and instead of comparing myself I could relax and feel turned on.

‘I’m looking forward to sharing and going on more sexual adventures with Lucy – bring it on.’

Lucy had enjoyed sharing her bed with both men and women with previous boyfriends and she wanted to do the same with Lukasz. 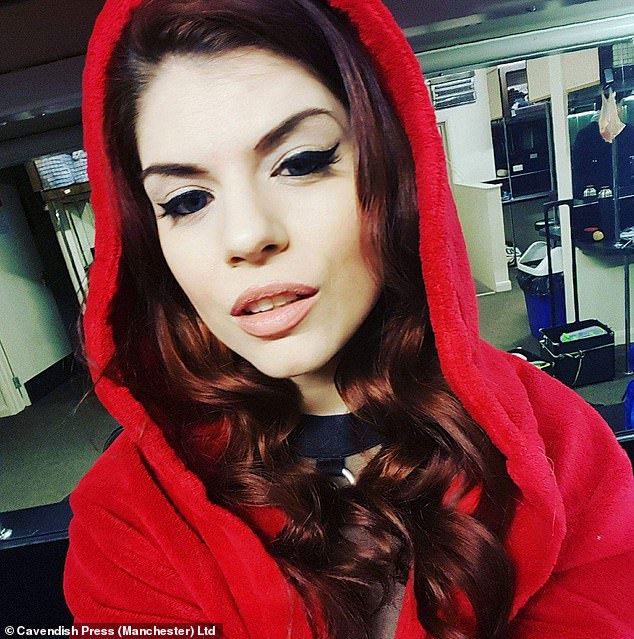 Lucy (pictured) had previously enjoyed sharing a bed with more than one person and was keen to introduce Lukasz, but he was worried that his jealousy would get in the way 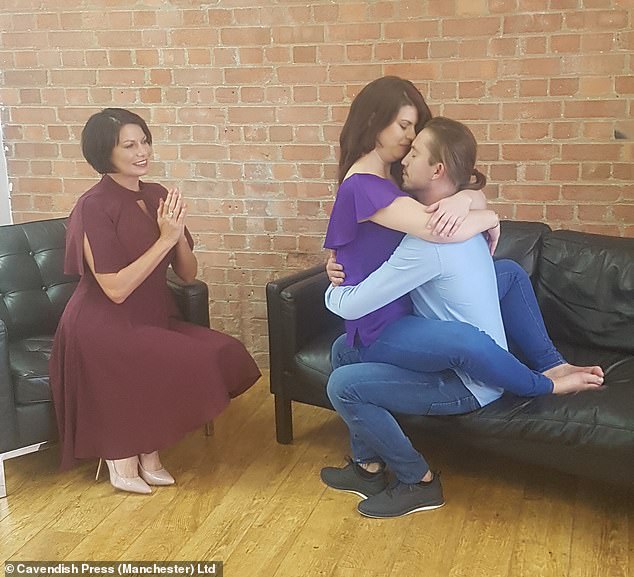 But he had never practised group sex before and was worried that he would become jealous.

He eventually agreed to Lucy’s request for another man to join them in the bedroom but felt threatened by the stranger who he feared was a better lover.

Lukasz added: ‘It was a bit of a nightmare. We had meet this man and we all agreed to go back to a hotel for sex after meeting in a bar.

‘I had agreed the safe word of ‘pink’ with Lucy beforehand which would indicate clearly that if I was unhappy with what was going on we could both make our excuses and leave. 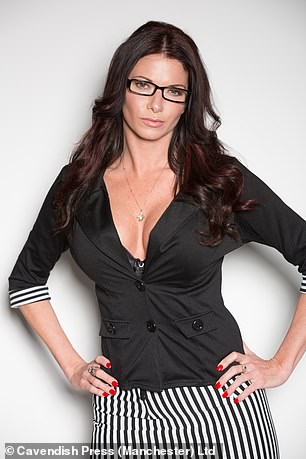 Louise helped Lukasz overcome his low self esteem in the bedroom

‘I immediately felt uncomfortable when we go to the hotel. I was jealous of the other man and did not enjoy seeing Lucy clearly enjoying herself with another person.

‘I also compared myself unfavourably with him and felt that he was better endowed than me which sparked lots of further insecurities. It all ended in farce when Lucy was enjoying herself so much having sex that she didn’t hear me say the safe word pink when I indicated it should stop.

‘We had a huge row afterwards and I thought that would be the end of our threesomes.’

Lucy said: ‘We later met a woman in a hotel and I thought I would break the ice by kissing the woman to turn Lukasz on when we got up to the bedroom.

‘But when Lukasz joined in, I quickly became jealous, just as Lukasz had been before.

‘I felt that he fancied her more and he would carry on seeing her without me. But we all had sex and I think Lukasz really enjoyed it.

‘I felt we both needed some assistance if we were going to embrace this lifestyle more fully without jeopardising our relationship.

‘After we have the therapy it was completely different to the previous time and a real night to remember. Lukasz didn’t get jealous and I didn’t feel guilty. We are finally on our way to being able to enjoy this way of life without the fear of losing one another.’

Louise Van Der Velde said: ‘The main issue I identified was Lukasz fearing he was not good enough and comparing himself to others.

‘I want him to feel like a sex god, not a sex plod. So I needed to clear his self-esteem issues and through timeline therapy take him back to the very first time he didn’t feel good enough. 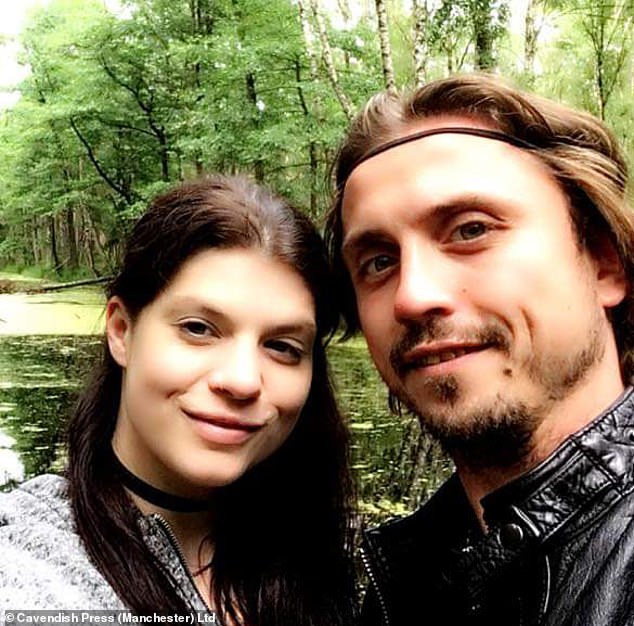 The couple had attempted two threesomes previously, once with a man, once with a woman, but in both cases found that they became jealous of the third party 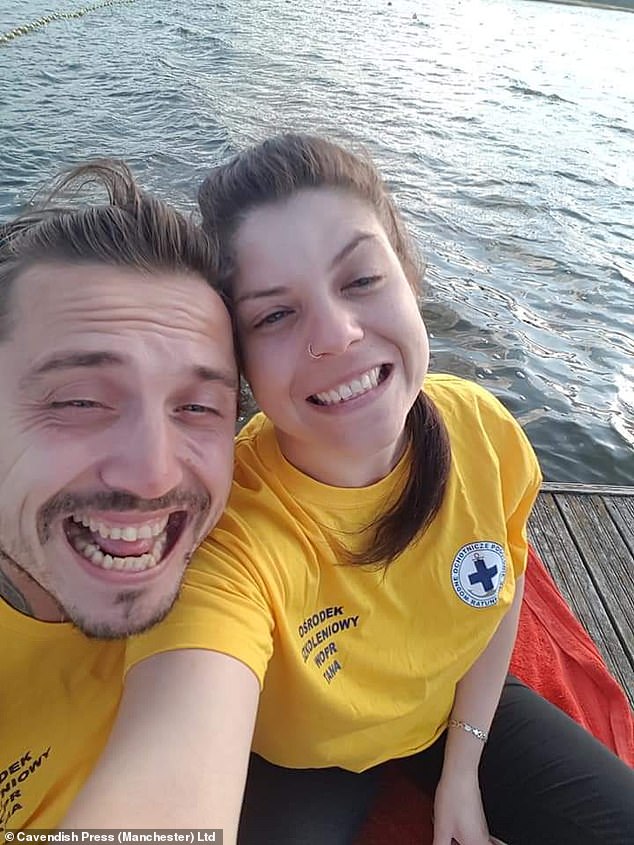 ‘For him, it was a childhood memory of being bullied when he was eight years old. Despite being in his mid thirties those insecurities still plague him today.

‘After clearing those negative thoughts I then asked him to remember positive times when he’d felt good about himself sexually and otherwise.

‘I told him to squeeze his fist to feel confident and when he was plagued by insecurities to listen to his favourite song to take take him back to that happy feeling.’

Louise added: ‘Lucy had already completed my online video programme so she had already cleared her negative emotions which had built up from a young age. But she still had feelings of fear, sadness, jealousy, lack of confidence, anger, frustration, and guilt.

‘Through tapping – a technique used to stimulate your emotional pressure points by using your finger tips – I taught her how to move energy around her body to have more positive orgasms to make her feel great. 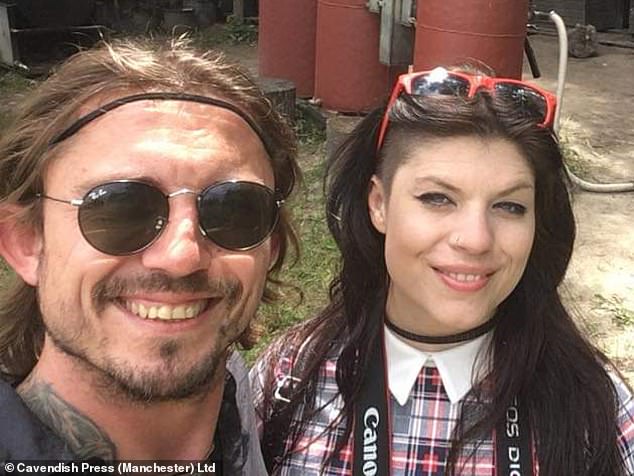 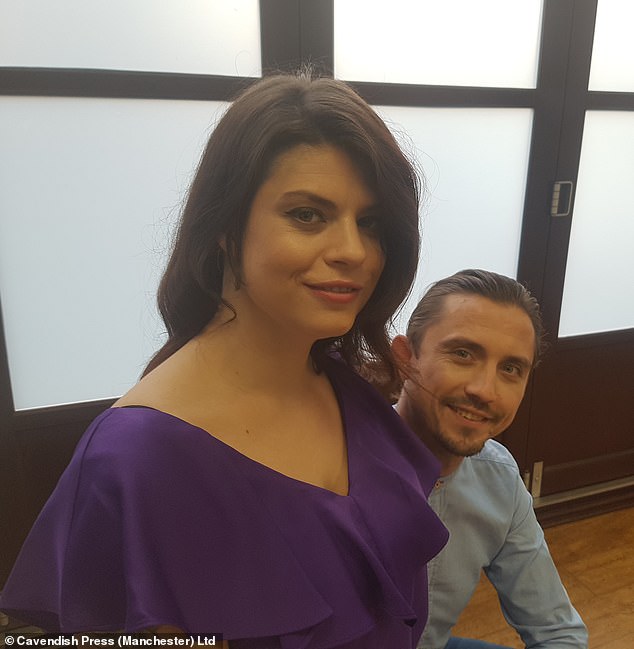 ‘The next part of the one hour session was to make her feel sexually confident and to make her bond with Lukasz unbreakable.

‘I taught the pair Tantric breathing exercises to help them become in tune with one another. They had to to breathe in unison and into each other’s mouth when they had sex.

‘Lucy also did ten minutes a day of tapping on the emotional pressure points to release her fear of losing Lukasz and fear of being judged.

‘For the final session, the couple did a joint Skype session where I taught them how to anchor their love by squeezing each other’s hands when in a situation where they needed to reassure one another.

‘It was amazing – both seemed much happier and confident within themselves and no longer feared losing the other one.’