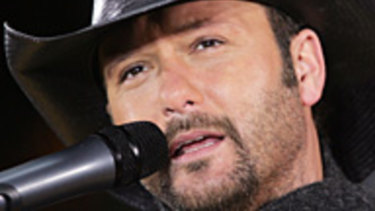 The wildest applause at this country music festival went to a hip-hop producer with a novelty hit.

Blanco Brown was only added to Country 2 Country's line-up three weeks ago, as his pedal-steel sampling The Git Up inspired urban line-dancing memes and two-stepped on to charts around the world.

It wa an inspired risk. Brown appeared about two-thirds of the way through this ten-hour event, right after the kind of thing one would expect from a modern country bill: Midland, three handsome Texans in cowboys hats, singing cool if calculated southern rock songs about drinkin' and cheatin'.

This crowd, heavy on cowboy hats itself, clearly expected Brown to be more of a giggle than a listening experience, a sea of phones poised as the 31-year-old hipster-bearded Atlantan took the stage.

Then his deejay spun a dreamy acoustic guitar track, and the dance craze guy burst into an impassioned cover of A Change Is Gonna Come to stand alongside Sam Cooke's original.

If that wasn't astounding enough, Brown's mellifluous voice told stories with heart on CountryTime and Tn Whiskey, their booming bass the only thing separating them from Nashville's best. Meanwhile the chorus of Georgia Power showed latent virality to match The Git Up, which after a set this good, got almost everyone trying to copy Brown's frenetic actions.

It was a tough act to follow, and the charming Kelsea Ballerini gave her all. However her music is full of the stuff that has watered down mainstream country in recent years – melismatic singing, non-specific writing, slick keyboards and hair-metal guitar. Only the clever I Hate Love Songs and spunky Dibs broke the mould.

Grittier was western Sydney's own Travis Collins, whose Call Me Crazy and High Horse felt like he'd lived them. But it's a shame that singing in an American accent is still the price of success in this genre.

And they don't come more successful in country music than Tim McGraw, who with his black Panama hat and ripped physique looked the contemporary form's archetype.

McGraw's eight-piece drowned him out at first, a reminder that the Louisianan is guiltier than most for country's merger with corporate rock.

But his supple voice soon found its mojo on the fiddle-driven Where The Green Grass Grows, while new song Hallelujahville celebrated what connects McGraw to Blanco Brown after all – the power of a simple truth, tunefully told.