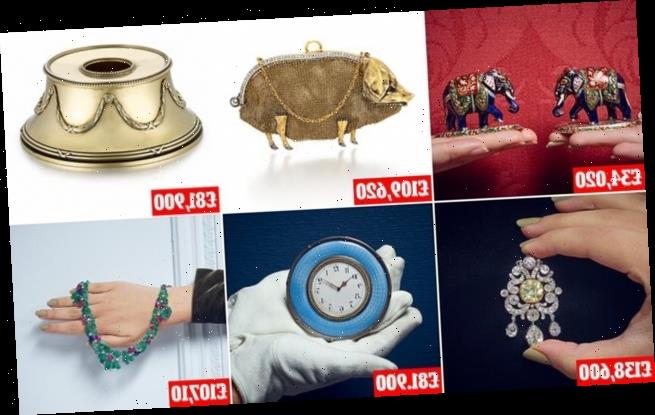 Countess Mountbatten of Burma’s lavish possessions fetch £5.6million at auction: 376 items belonging to Prince Charles’ late godmother are snapped up – including a pig-shaped evening bag which sold for £109,620 (44 times its estimate!)

A stunning array of items owned by the late Countess Mountbatten of Burma has fetched £5.6 million at auction today – with several items earning over double the estimated price.

The Countess – whose husband John Knatchbull died in 2005 – passed away in 2017 at the age of 93 and her funeral was attended by members of the royal family including the Queen and Prince Philip and Charles, who was her godson.

Over 1,400 bidders from 55 countries participated in the auction of more than 400 of her possessions, with a marathon relay of four auctioneers over the course of 11 hours.

The items, including a diamond brooch, an ‘extraordinary’ pig-shaped bag and a Fabergé inkwell which the Countess gifted to her husband, were sold by auction house Sotheby’s with several fetching tens of thousands over their expected price. 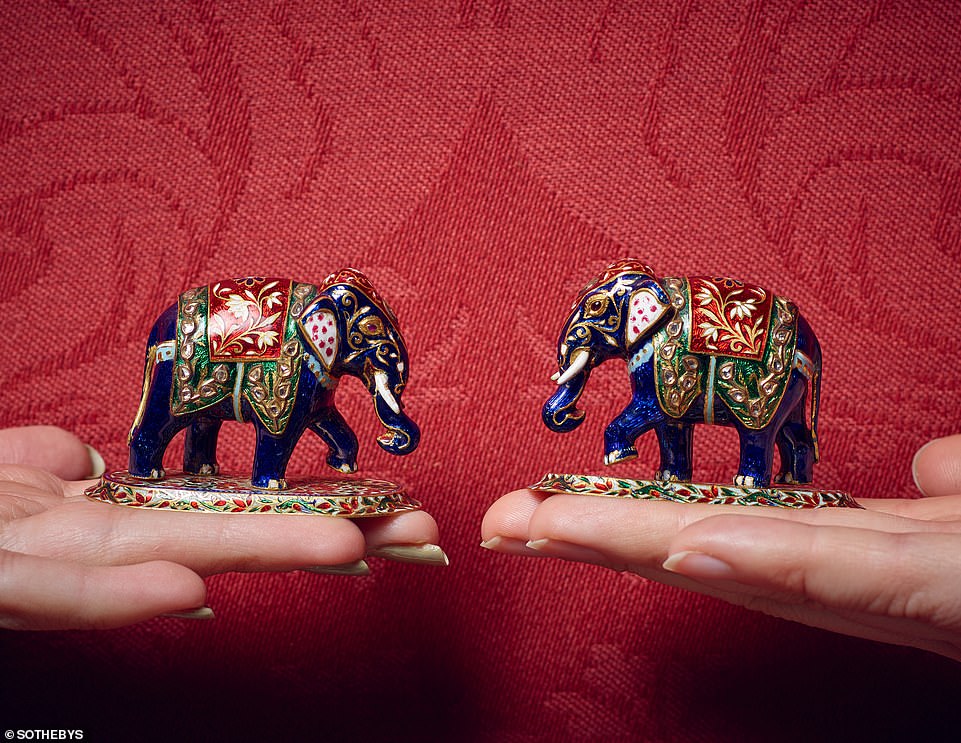 A pair of jewelled gold and enamel elephants, which were a gift from Lord Mountbatten to his wife Edwina. Lord Mountbatten had been appointed Britain’s last Viceroy of India. The family grew close to both Mahatma Gandhi and Prime Minister Jawaharlal Nehru. The bases of the elephants are Inscribed in Lord Mountbatten’s handwriting:  ‘Edwina from Dickie’ and ’18 July 1946′ 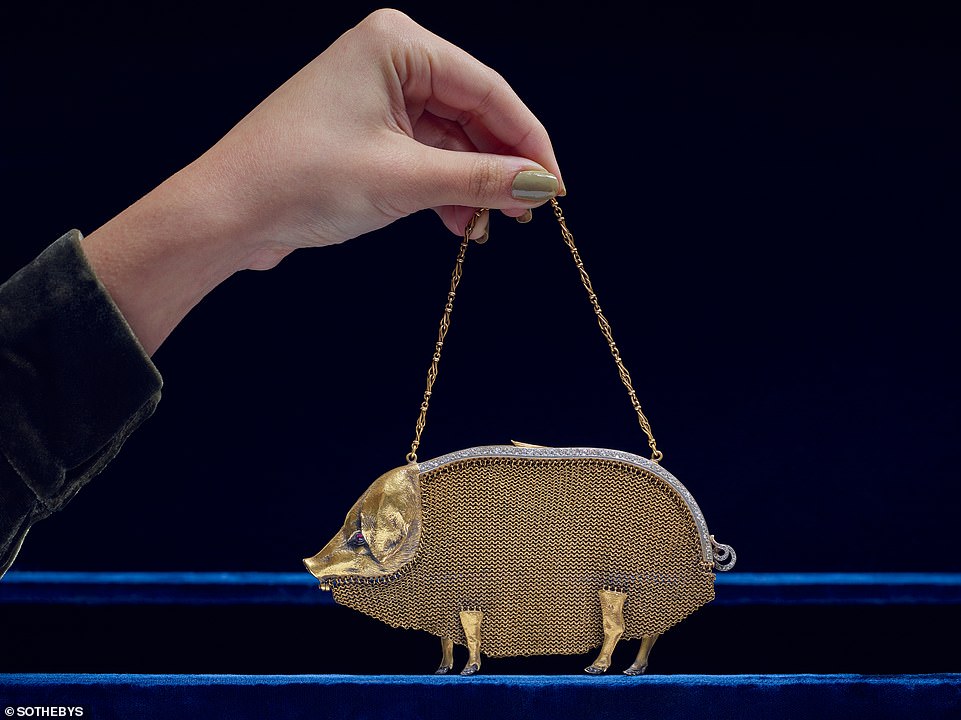 An ‘extraordinary’ gold handbag which is shaped like a pig and is set with diamonds is a sign of the Mountbatten family’s love of animals. It comes complete with ears and trotters, as well as a gold chain, and has sold for £109,620. 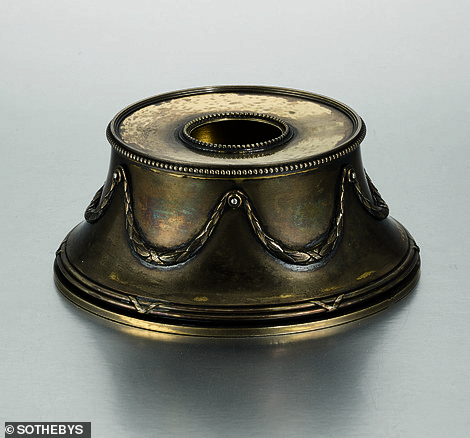 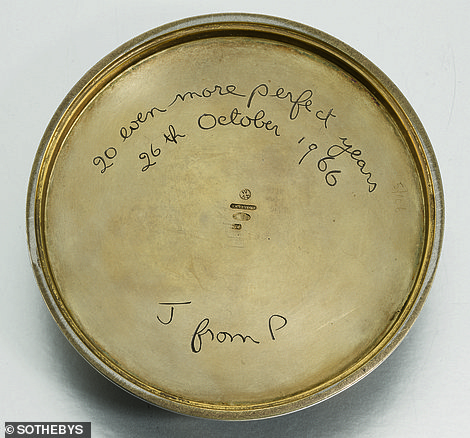 The sale also offers a Fabergé inkwell which the Countess gifted to her husband on 26 October 1966, the anniversary of their wedding twenty years before. It bears a romantic inscription in Patricia’s handwriting looking forward to ’20 even more perfect years’

The items come from Countess Mountbatten’s 18th-Century family home, Newhouse, where she lived with her husband, a film producer. The Countess’s extraordinary life and heritage made her a darling of Britain’s aristocracy.

Some of the objects on sale, which also include portraits, other items of jewellery and pieces of furniture, are family heirlooms while others are personal mementos or meaningful gifts.

A Fabergé inkwell which the Countess gifted to her husband on 26 October 1966, the anniversary of their wedding twenty years before, sold for £7,560 after an estimated £4,000- 6,000.  It bears a romantic inscription in Countess Mountbatten’s handwriting looking forward to ’20 even more perfect years’. 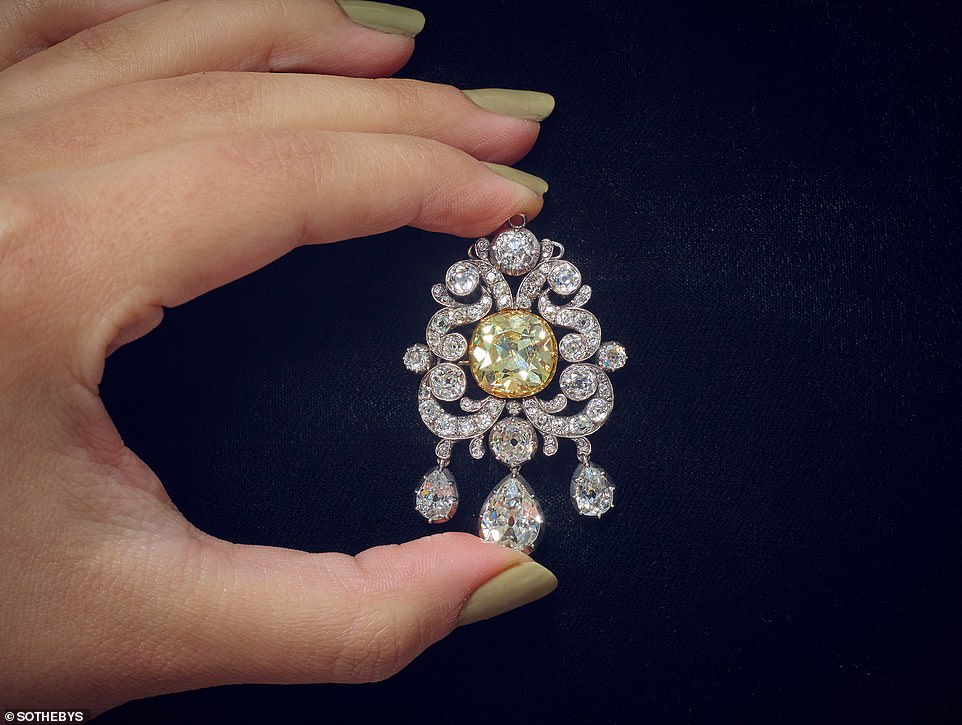 The Banks Diamond, a late 18th century brooch which was passed down through the Knatchbull family and given to the botanist Sir Joseph Banks by his sister Sarah around the time of his marriage in 1779 sold for £138,600 after an estimated £40,000-60,000 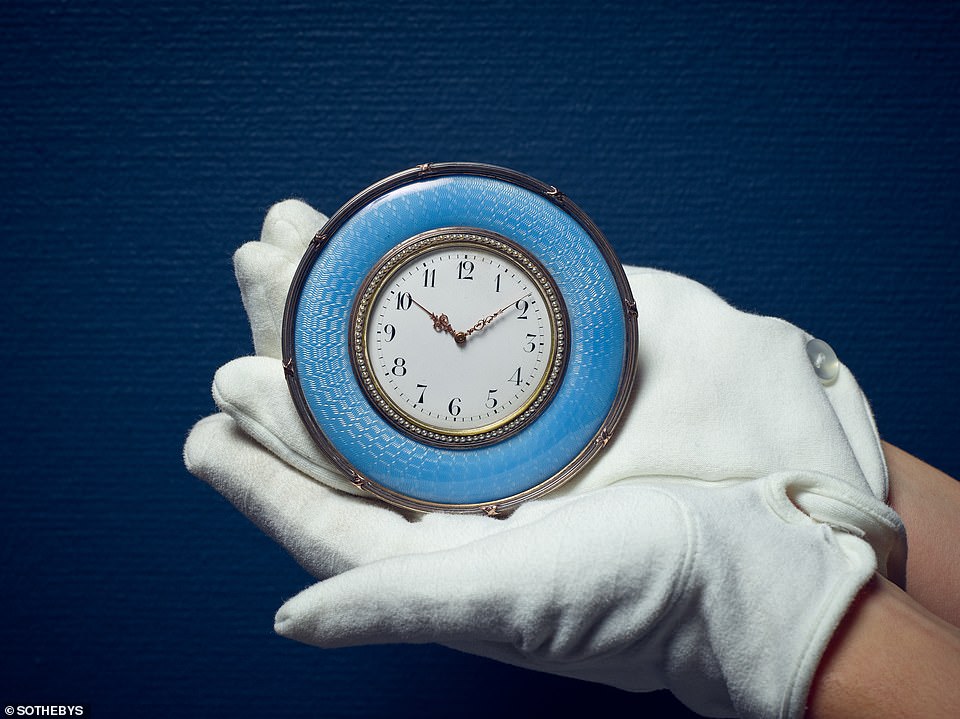 A Fabergé clock from St Petersburg, which dates from between 1896 and 1903. The Countess’s father, Louis Mountbatten, was closely related to the Russian Royal family through both his mother and father. The last Tsarina was his aunt, with whom he spent many summers. This exquisite clock was used by the Countess in her bedroom 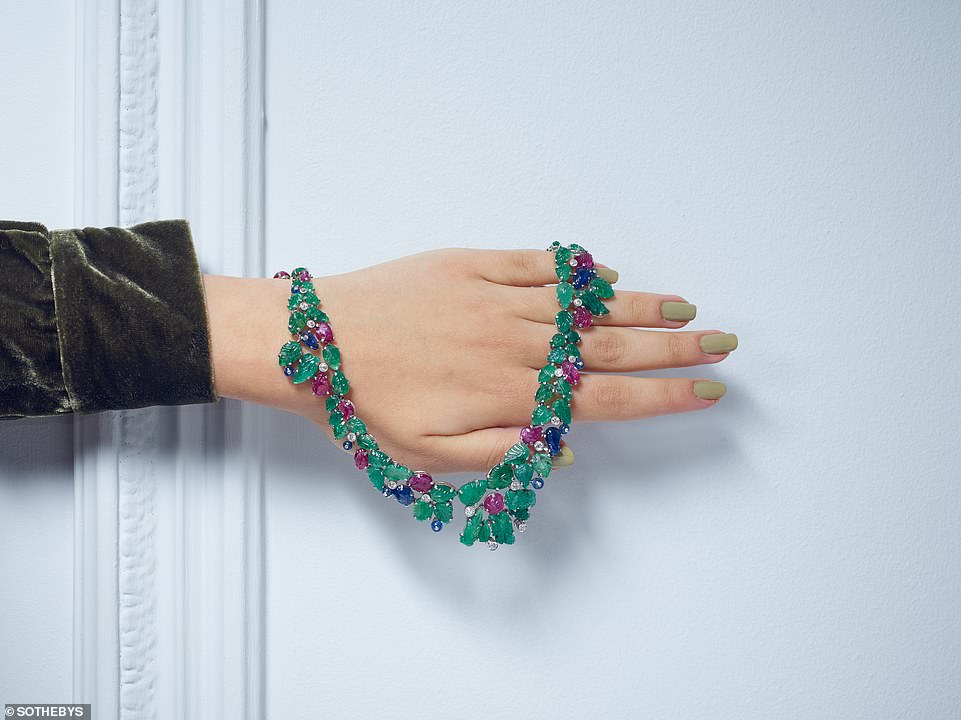 With its profusion of multicoloured carved rubies, emeralds and sapphires, a ‘Tutti Frutti’ style necklace designed as an wreath of carved leaves, brought a double-estimate of £107,10

The Banks Diamond, a late 18th century brooch which was passed down through the Knatchbull family and given to the botanist Sir Joseph Banks by his sister Sarah around the time of his marriage in 1779 sold for £138,600  after an estimated £40,000-60,000.

An ‘extraordinary’ gold handbag which is shaped like a pig and is set with diamonds is a sign of the Mountbatten family’s love of animals. 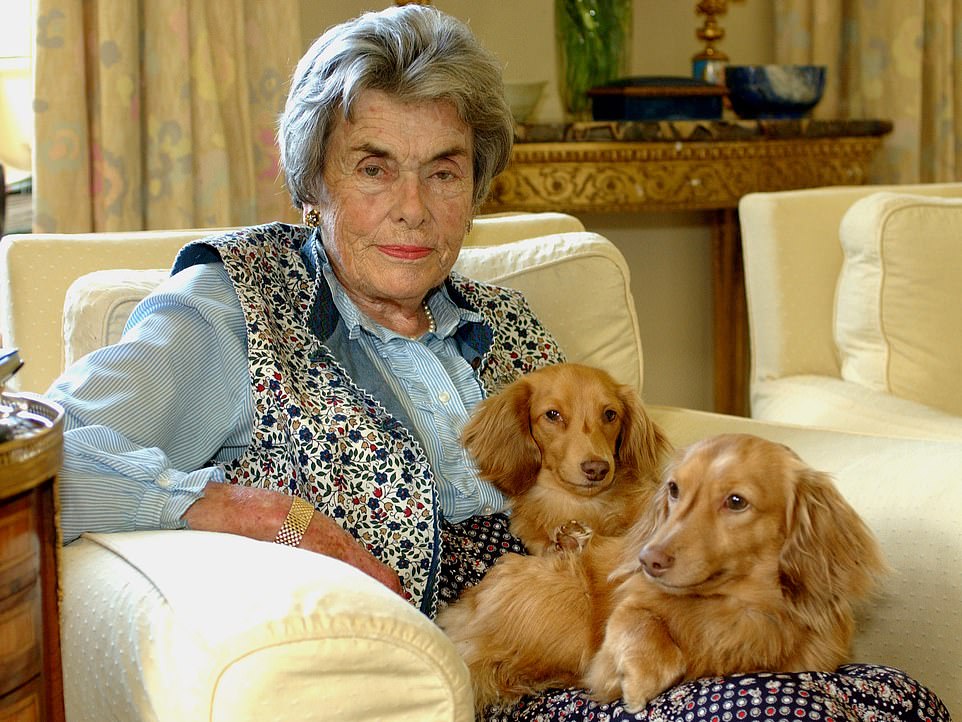 Born Patricia Mountbatten, the Countess was the eldest daughter of Prince Charles’ beloved great-uncle and the last Viceroy of India, Louis Mountbatten, and his wife, Edwina. She passed away in 2017 at the age of 93. She is pictured above in 2004 with her dogs Sandy and Skye

With its profusion of multicoloured carved rubies, emeralds and sapphires, a ‘Tutti Frutti’ style necklace designed as an wreath of carved leaves, brought a double-estimate of £107,10.

Born Patricia Mountbatten, the Countess was the eldest daughter of Prince Charles’ beloved great-uncle and the last Viceroy of India, Louis Mountbatten, and his wife, Edwina.

In 1979 she survived a deadly IRA blast that killed her father, 14-year-old son, Nicholas, and her mother-in-law, Lady Brabourne.

The Countess was the patron of more than 100 charities during her life. 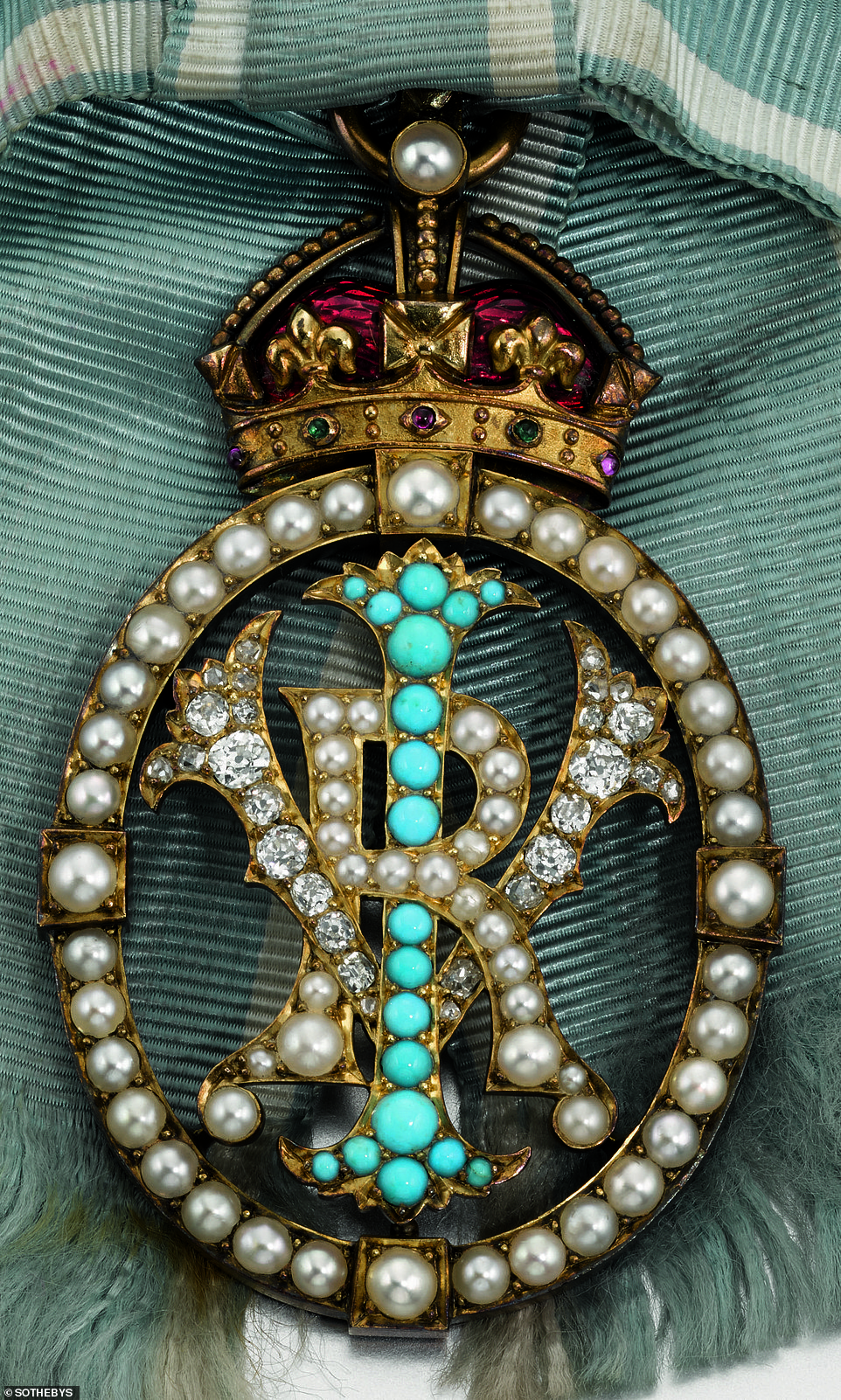 The Imperial Order of the Crown of India which was presented to Lady Mountbatten’s mother-in-law, Doreen, Lady Brabourne. This was an award that could only be bestowed by the Monarch to a female recipient. The diamond, pearl and turquoise-set decoration would have been worn at State occasions by Doreen, Lady Brabourne, the Countess’s mother-in-law. The only person who still wears this Order today, and the last to hold it, is Her Majesty the Queen 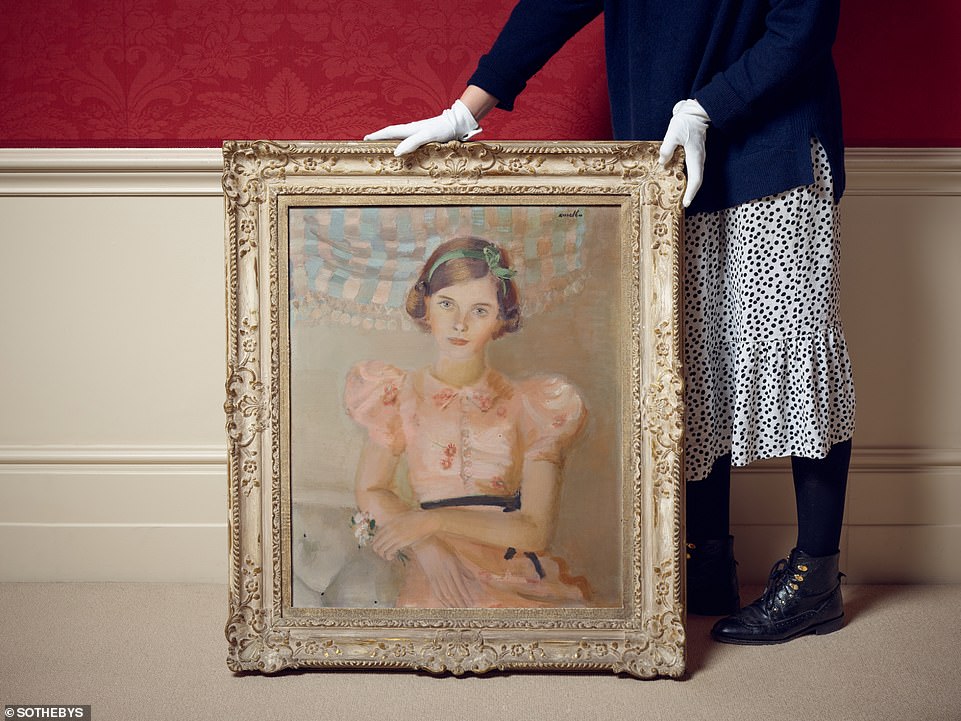 This portrait of the Countess when she was a girl, which was painted by Raymond Kannelba 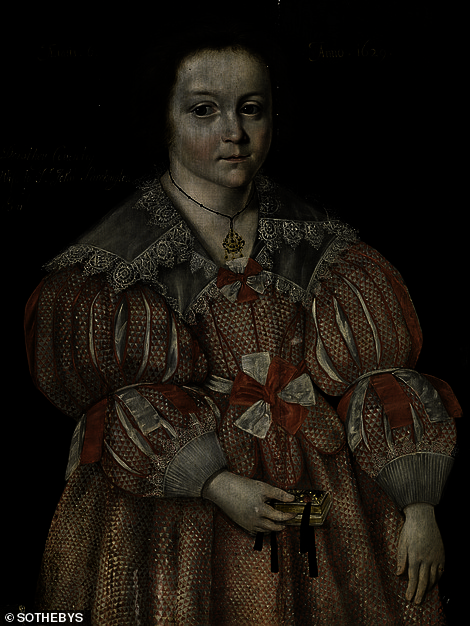 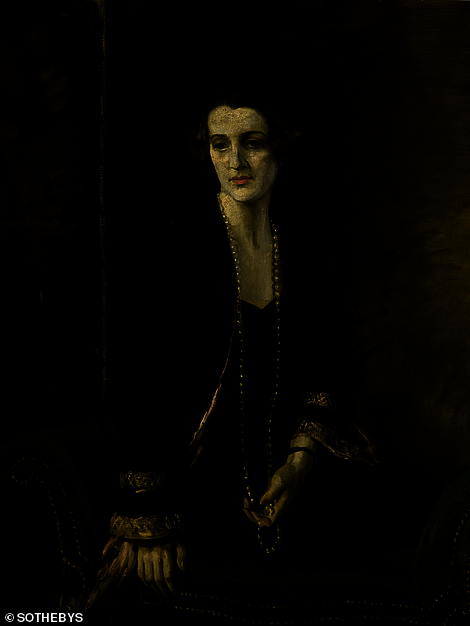 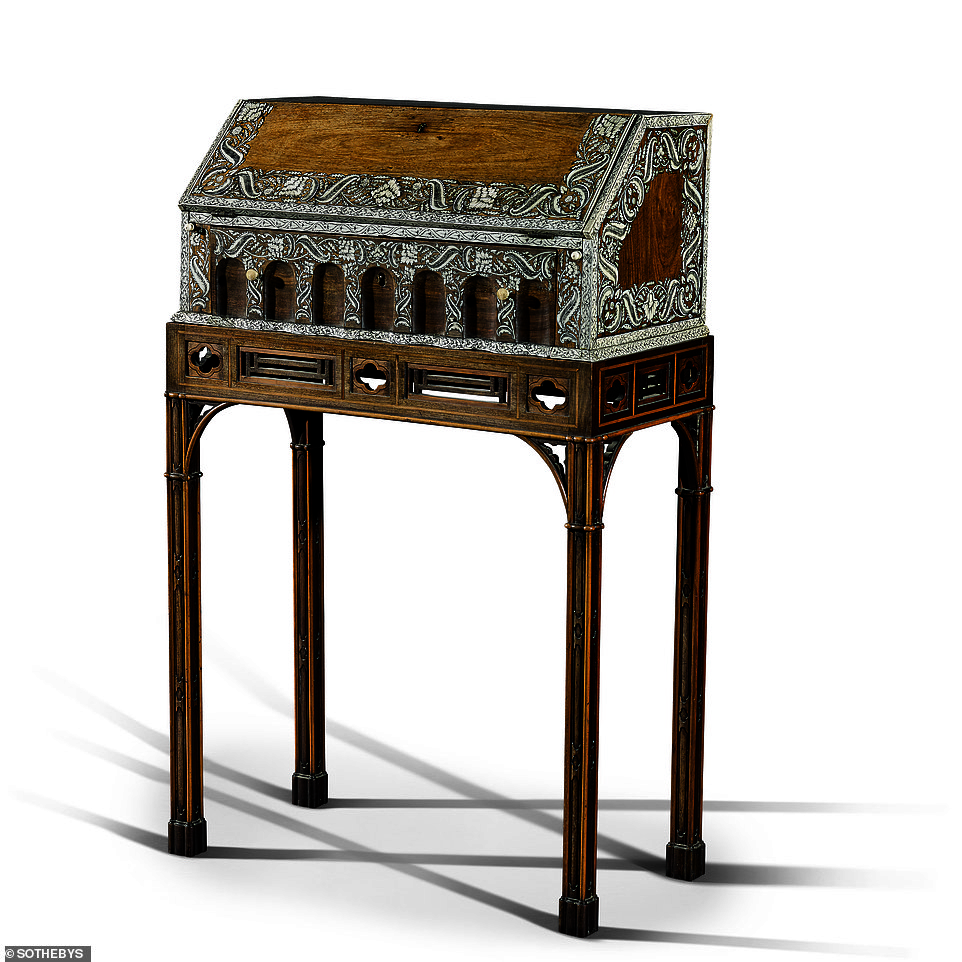 Museum-Quality Furniture: A rare Anglo-Indian inlaid bureau mounted on a mahogany stand supplied by Thomas Chippendale to Sir Edward Knatchbull in 1767. Amongst the treasures in the sale is an object by Thomas Chippendale, England’s greatest cabinetmaker. The incredibly rare stand was made by Chippendale for the sum of £4 to house a Knatchbull heirloom, an Indian inlaid miniature bureau – a celebration of the link between England and India 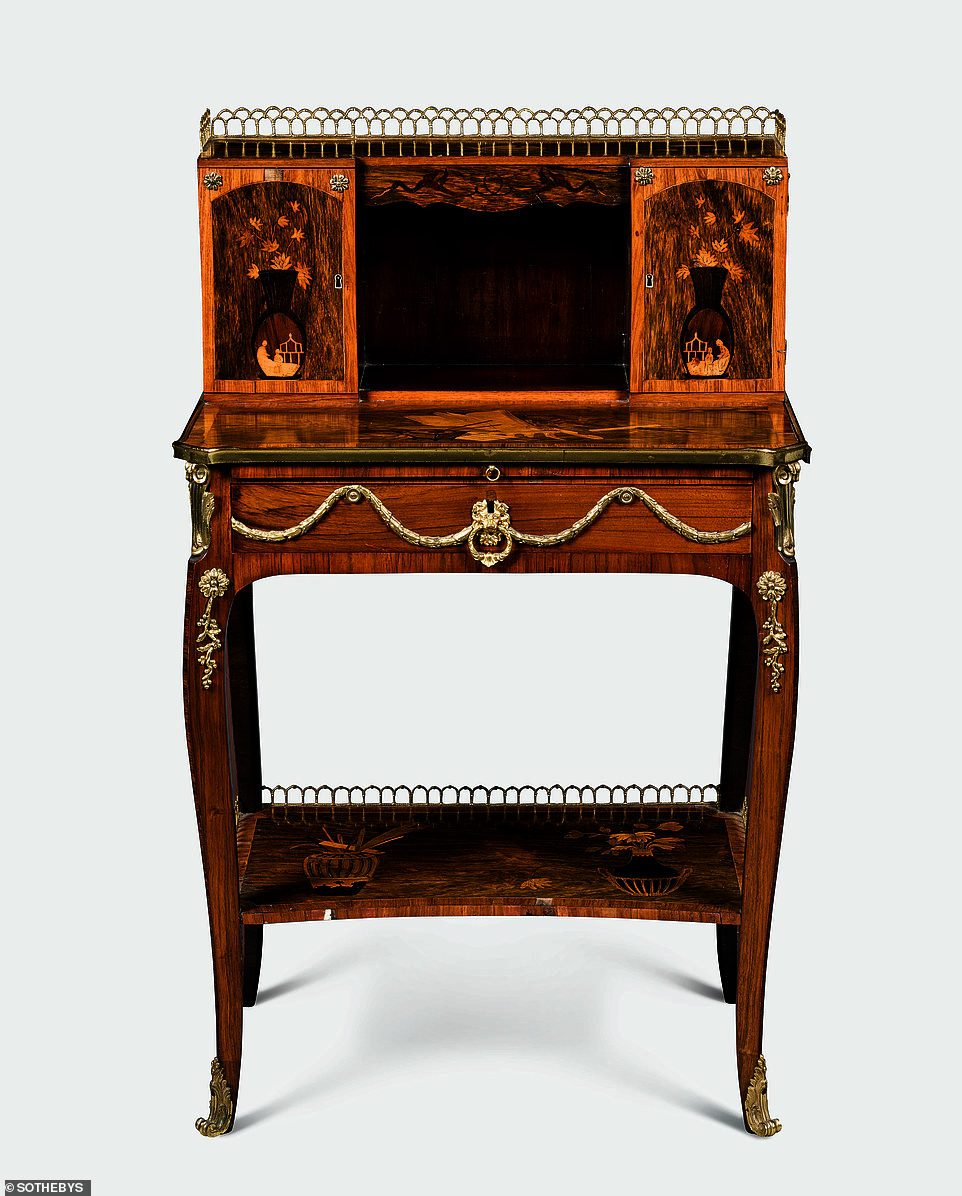 This French Marquetry cabinet, which dates from the reign of King Louis XVI, is made from Rosewood 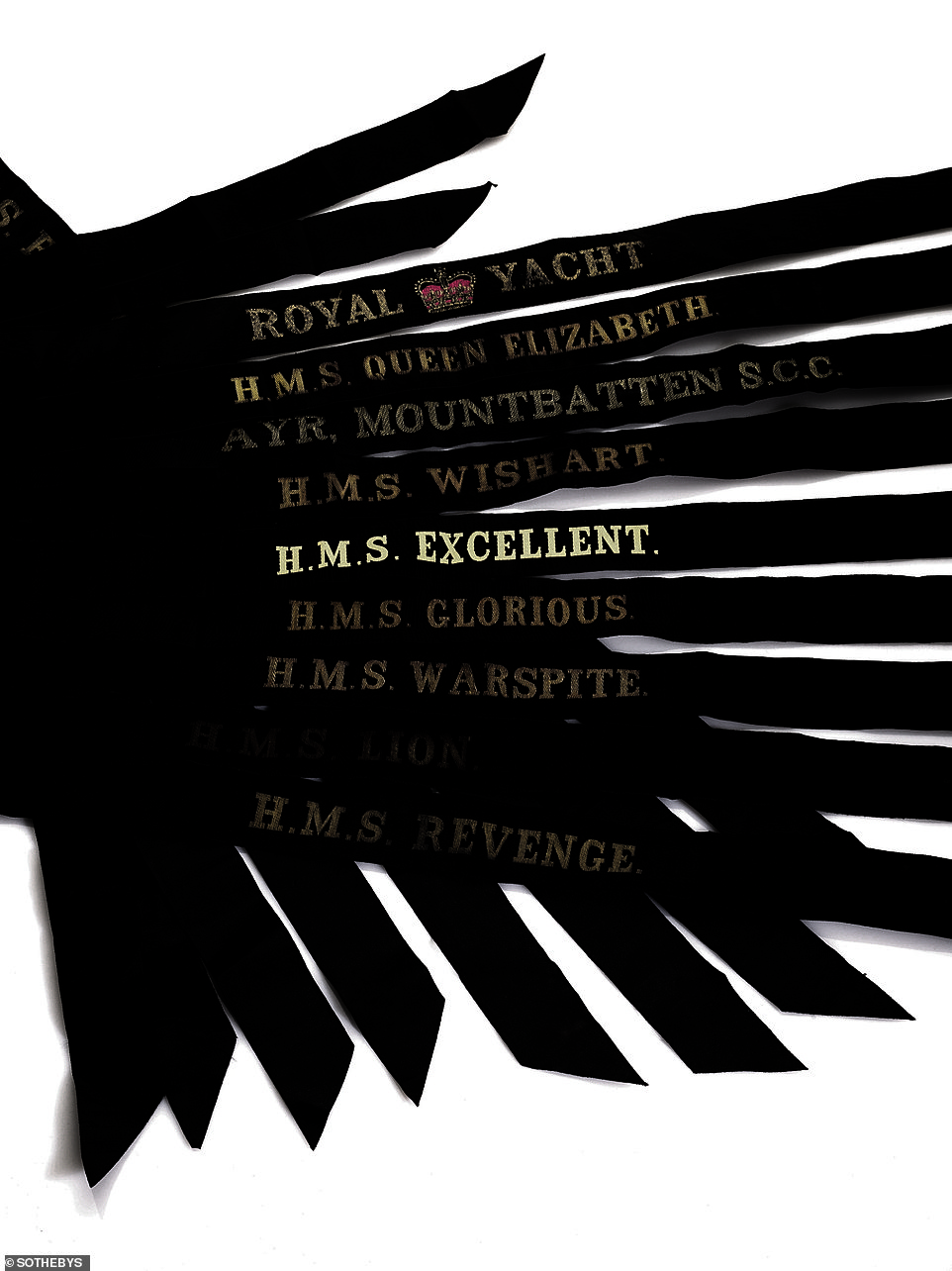 These sailors’ cap tallies were collected by the Countess as a child, many given to her by her father. They come from ships that Lord Mountbatten was directly involved with. Those of the HMS Lion and Queen Elizabeth were worn by Mountbatten at the start of his career in the Navy as a teenager. There are others from vessels significant in his naval career, including HMS Wishart 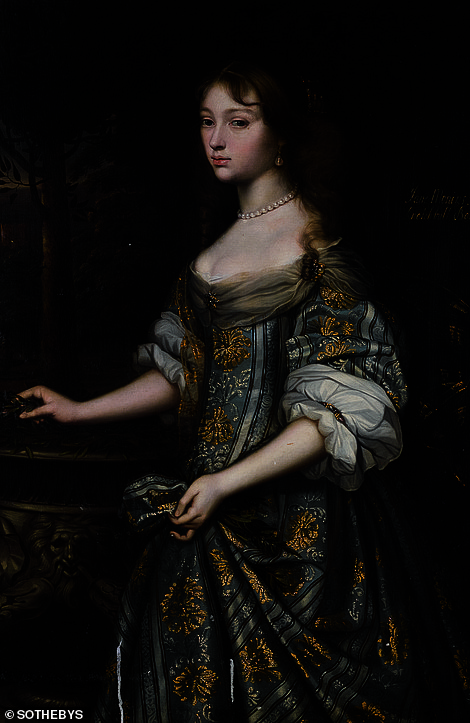 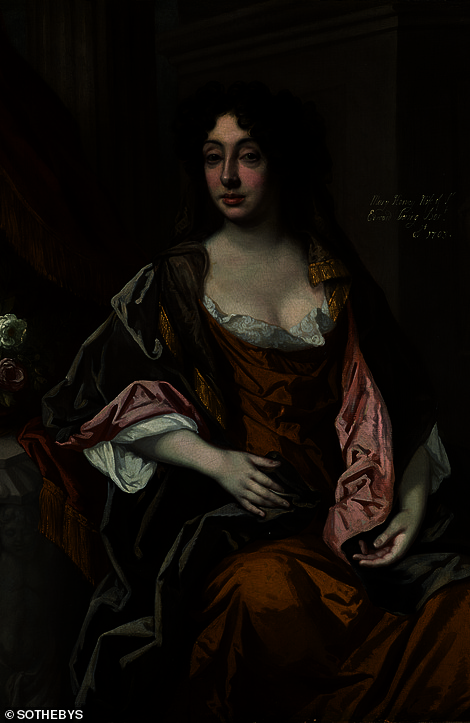 Formerly hung in Patricia’s Drawing Room, this portrait (left) of Jane Monins, who died in 1699, was painted in 1670 and  commissioned by Janes husband Sir John Knatchbull, 2nd Baronet. A payment of £15 to the artist was made. A further painting in the sale (right) is by Thomas Hawker, who was one of Sir Peter Lely’s chief studio assistants. This depicts Mary Harvey (1629-1705), the first British female composer to have had her works published. Her daughter Mary married Sir Thomas Knatchbull, 3rd Baronet 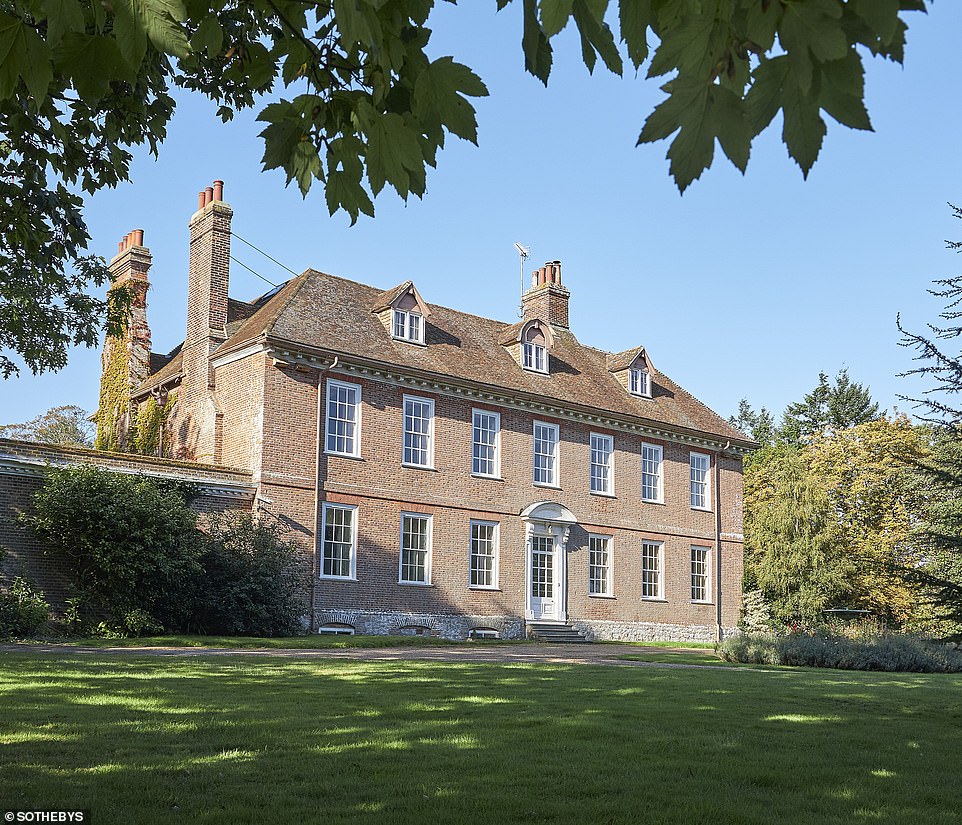 The items come from Countess Mountbatten’s 18th-Century family home, Newhouse, where she lived with her husband, a film producer

She and her husband had eight children and, due to their individual backgrounds, their marriage brought together two incredible inheritances.

The Knatchbull family home, Mersham le Hatch, is nestled in the Kent countryside. Many of the objects held within it are part of the upcoming sale.

It was furnished by Thomas Chippendale in the 1770s. Several pieces of furniture, including a rare Anglo-Indian Chippendale bureau,

The Countess’s family said ahead of the sale on March 24: ‘Our overriding desire when organising our mother’s affairs is to honour her wishes and celebrate the memory of both our mother and our father.

‘They had discussed these arrangements with us, and we are simply putting their plans into effect. We are of course keeping many things and importantly amongst these are objects which are of sentimental value and much loved.’

Harry Dalmeny, Sotheby’s Chairman, UK & Ireland said: ‘Lady Mountbatten’s residence, Newhouse was a private place for entertaining only the closest of family and friends, capturing all the magic of a stately home on an intimate scale.

‘Through her belongings, many passed down from members of the extended family over the years, collectors have the chance to see the story of the twentieth century unfold and acquire evocative vestiges of a glittering way of life.’

The life of Countess Mountbatten of Burma

By Stephanie Linning for MailOnline

Born Patricia Mountbatten, the Countess was the eldest daughter of Charles’s beloved great-uncle Louis Mountbatten and his wife, the heiress Edwina Ashley, who served as the last Viceroy and Vicerine of India.

In 1946 she married John Knatchbull, the 7th Baron Brabourne, who at the time was working as an aide to her father in the Far East. He would later go on to produce films including A Passage to India and Death on the Nile.

Their wedding at Romsey Abbey was attended by members of the royal family and her third cousins the Queen, then Princess Elizabeth, and Princess Margaret, served as bridesmaids alongside her younger sister Lady Pamela Mountbatten and Princess Alexandra, the daughter of the Duke and Duchess of Kent.

The couple had eight children and 18 grandchildren. Their eldest son, Norton, 69, and his wife Penny, 64, who live at Broadlands, inherited the titles of Earl and Countess Mountbatten of Burma on his mother’s death.

Tragedy struck in August in August 1979 when an IRA bomb blew up her family’s fishing boat off the coast of Sligo, Ireland. 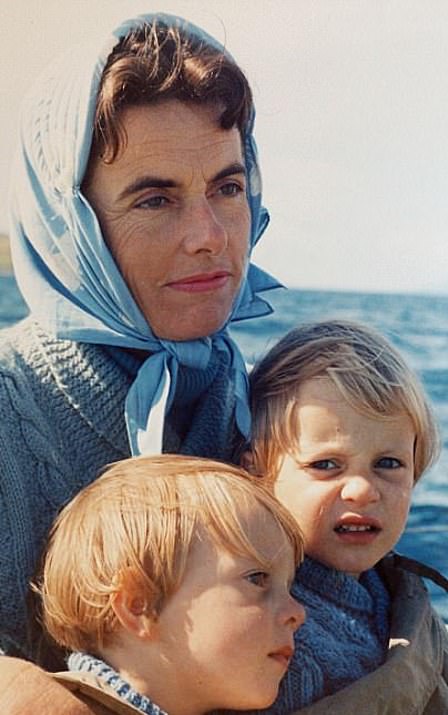 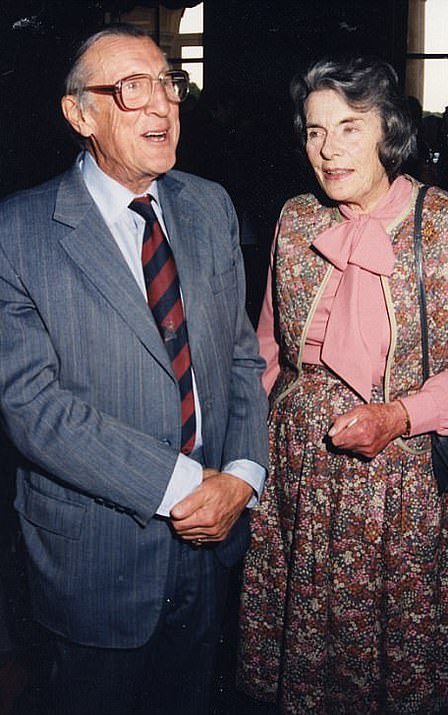 Devastating loss: Countess Mountbatten lost her son Nicholas (left with his mother and twin brother, Tom) in an IRA bomb attack in August 1979. The Countess and her husband, Lord Brabourne, right together in 1995, were badly injured in the blast

She was badly injured alongside her husband and son Timothy, Nicholas’ twin. The Countess was pulled from the water and required 120 stitches to her face, which she wryly referred to in later years as ‘my IRA facelift’.

The Countess, known as Lady Brabourne at the time of the attack, recalled how she cried every morning on waking for about six months after the blast.

In a book by a bereavement charity, she referred to ‘the seemingly endless black tunnel’ through which those left behind have to pass to reach ‘the light that truly does appear at the end, and which we eventually found ourselves’.

For more than 30 years she used her own personal experience of loss to help other bereaved parents, through her support of the charities Child Bereavement UK and Compassionate Friends.

Although Gerry Adams has since expressed ‘regret’ over Louis Mountbatten’s murder – which he publicly justified at the time – he stopped short of apologising for what took place. 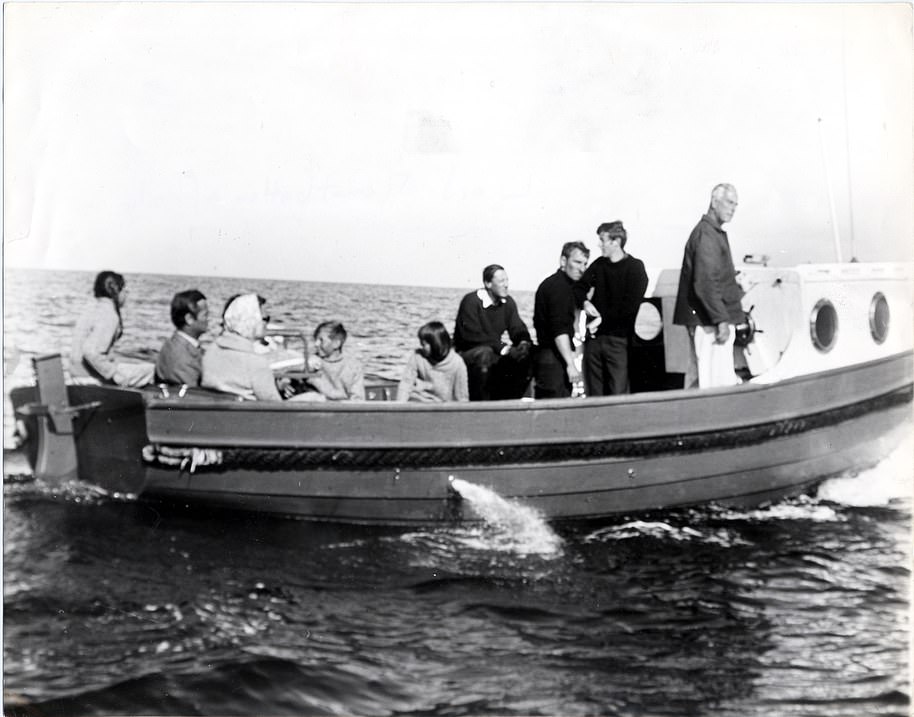 Louis Mountbatten, 1st Earl Mountbatten of Burma with members of his family on his thirty-foot boat, Shadow V, at Mullaghmore, County Sligo in the Republic of Ireland, just four years before it was blown up in a deadly IRA blast

The Mountbattens’ life was thrust back into the spotlight this year with the release of The Viceroy’s House, which starred Hugh Bonneville and Gillian Anderson as Louis and Edwina Mountbatten. The film captures the historic moment in 1947 when Britain relinquished its 300-year rule of India.

While it was widely reported the pair had had an affair, Lady Pamela explained their relationship was never sexual. She wrote: ‘Neither of them had time to indulge in a physical affair and, anyway, they were rarely alone but always surrounded by staff, police and other people.’