Viewers criticised a contestant on MasterChef the Professionals last night – for not being able to make a basic poached egg.

Kevin, a chef lecturer, 31, from Leeds, made the dish during a skills test set by renowned chef Monica Galetti. She asked the contestants make oeufs en meurette – a poached egg in a red wine sauce, served on sourdough toast.

The chef took two attempts at making the egg, when his first one went wrong. While his second egg still wasn’t up to scratch. The shows host, Greg Wallace, when critiquing his attempt at the dish, even called the egg ‘scruffy’.

Twitter were completely shocked that a professional chef struggled to poach an egg, with one saying that his egg was ‘appalling’. 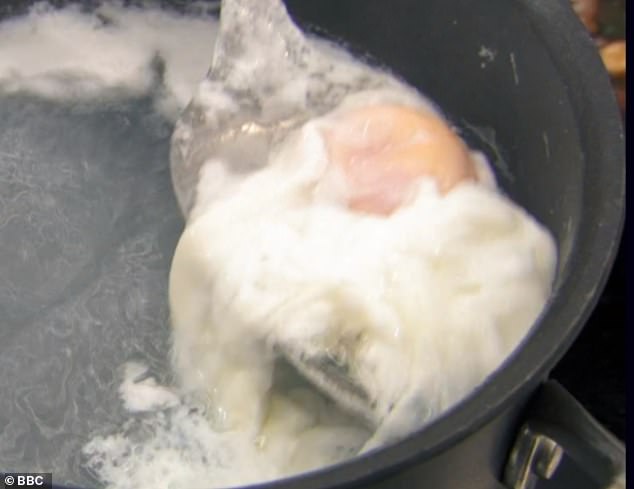 Twitter were completely shocked that a professional chef struggled to poach an egg, with one saying that his egg was ‘appalling’ 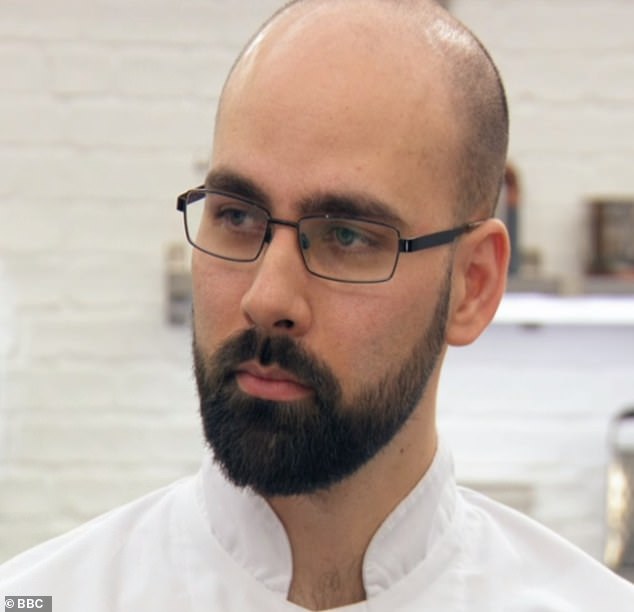 Kevin (pictured) a chef lecturer, 31, from Leeds, made the dish during a skills test set by renowned chef Monica Galetti

The beginning of the episode saw Monica show how to make the dish correctly – she said that the red wine sauce had to be made first and the water with the poached egg had to have white wine vinegar in it.

Kevin, who has been a chef for 13 years, was the first of the contestants to take on the skills test.

When Monica informed him that he’ll be making a oeufs en meurette, he admitted that he wasn’t sure what it was and she had to explain to him what it consisted of.

The chef lecturer at Leeds City college, then went on to start making the dish, admitting that he ‘kind of remembers how to make the sauce.’ 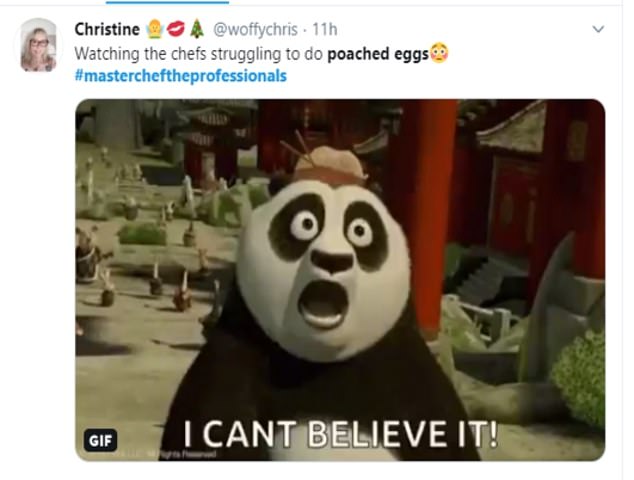 Kevin also went on to joke: ‘I have a feeling, if it doesn’t go well, that my students will be the first ones to tell me.’

As he starts to poach his egg, he fails to use the white wine vinegar in his water, which Monica looked concerned about.

His first egg failed to poach properly in the water and he asked: ‘Is there a chance I could get another egg?’

When Greg asked him why, he said that he wasn’t ‘happy with the shape of it.’ 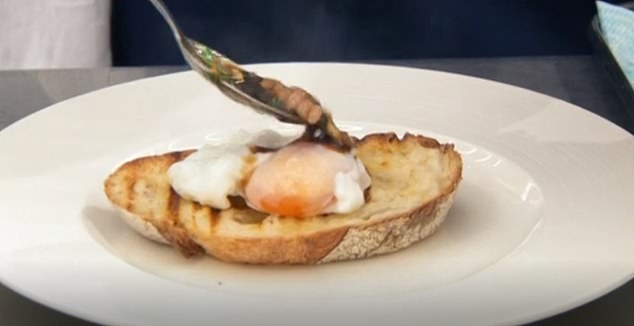 The chef places his egg the sourdough bread and adds the sauce, ready to present to the judges 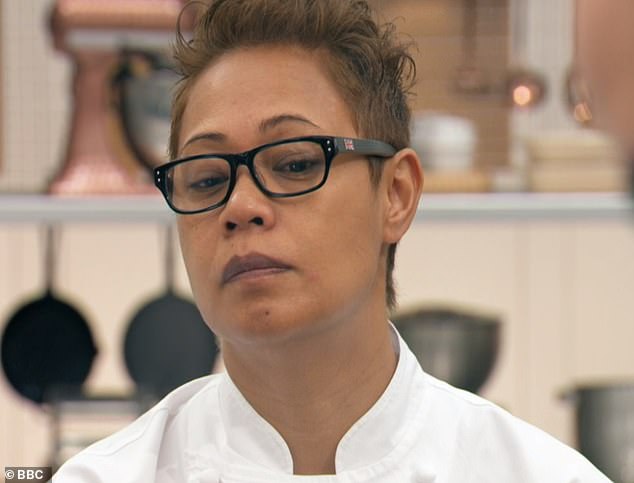 However he’s second attempt is just as bad, as he brings it out of the water the yolk is visible and the egg white hasn’t formed properly.

While he admitted ‘the white of the egg isn’t holding to the yolk as close as I would like’.

However, he placed it on the sourdough bread and added the sauce, ready to present to the judges.

Twitter was appalled that he couldn’t make poached eggs, with one saying: ‘The pressure must be horrible, but so many “professional” chefs seem to have no idea of the basics in these skills tests. Poached eggs? Suzette sauce? C’mon #mastercheftheprofessionals’ 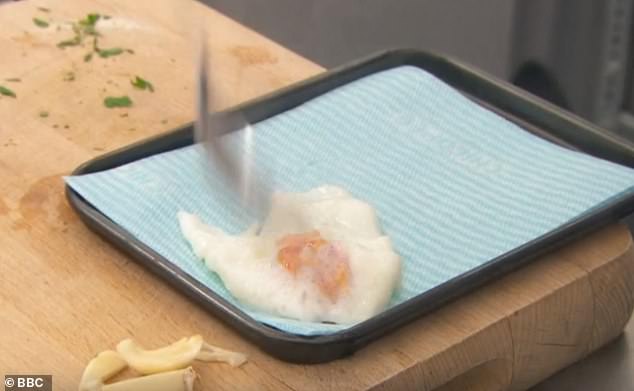 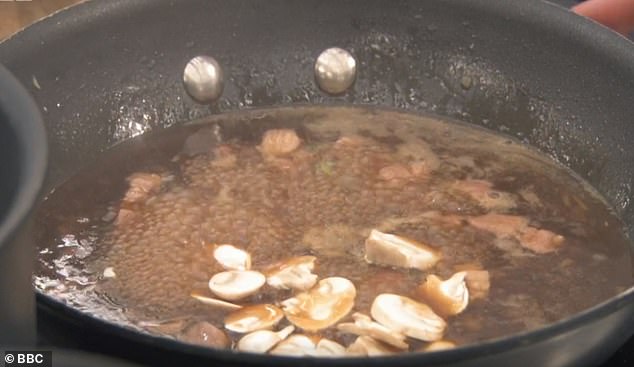 Kevin made the sauce for the oeufs en meurette – which is red wine, with mushrooms and stock

Another simply said: ‘Watching the chefs struggling to do poached eggs.’

‘These poached eggs are appalling no basic sauce skills! How are these people the professional,’ another added.

While one cheekily tweeted: ‘Even I make better poached eggs than that!’

While the judges weren’t impressed either, with Monica saying: ‘The poaching of the egg, it didn’t work. Normally Kevin, I’m not sure if its your nerves, but we poach in vinegar – it doesn’t look very appealing.’

While Greg went on to say: ‘It is a rich egg, but also a scruffy egg.’

Disappointed with himself afterwards Kevin said: ‘The nerves got to me, I know what I needed to do and I didn’t do it.’

Later on in the show Twitter also critisied the chefs pancake making skills. While only three contestants when through to the quarter final – and Kevin wasn’t one of them. 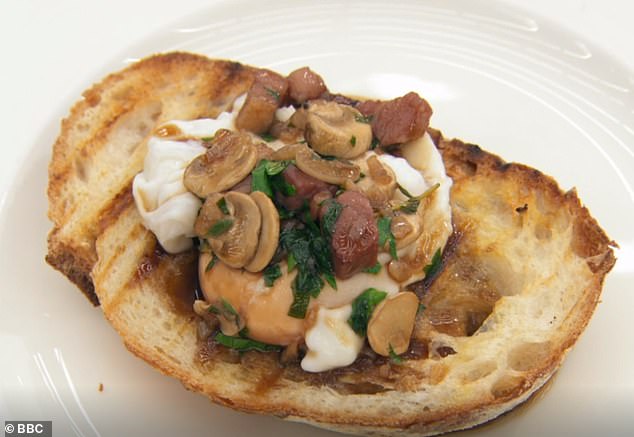 Kevin’s final dish – the oeufs en meurette – which is a poached egg in a red wine sauce, served on sourdough toast