The Chinese government has provocatively characterised the AUKUS partnership between Australia, the United States and the United Kingdom as a race-based military grouping of white nations, saying it was sending a negative message to the Asia-Pacific.

As China struggles to rouse opposition to AUKUS in key international forums, the country’s ambassador to Australia also argued Australia was setting a dangerous precedent on nuclear proliferation by seeking to acquire nuclear-powered submarine technology. 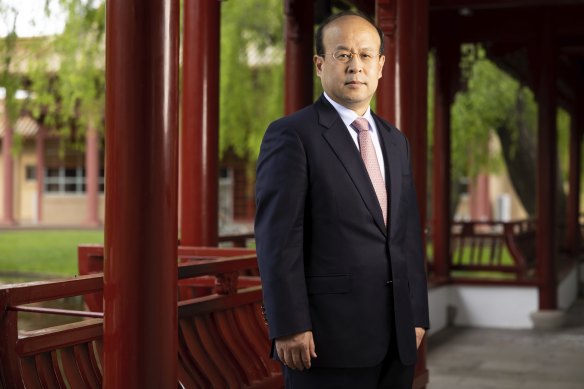 “It’s three Anglo-Saxon countries building up a new block,” ambassador Xiao Qian told The Sydney Morning Herald and The Age when asked about the AUKUS pact.

“What kind of message are you sending to the rest of the world? [That] you are basing your interest on your ethnic natures? This is not positive, to be honest.”

Asked if the Chinese government viewed AUKUS as an ethnic club, Xiao said: “That’s the impression to people in other countries.”

The new criticism came after China made no headway in crucial deliberations by the International Atomic Energy Agency (IAEA) on the alliance, with IAEA director-general Rafael Grossi saying the concerns about Australia acquiring nuclear submarines were “tricky” but could be managed.

Jaishankar praised the IAEA director-general for making a “very objective assessment” of the AUKUS deal and urged other countries to do so as well.

Elaborating on arguments China has made to the IAEA, Xiao said China did not believe nations with nuclear weapons should be allowed to transfer nuclear material to non-nuclear weapons states.

“It’s an open secret that many countries around the world are trying to obtain nuclear-weapons grade material,” he said.

“If you set an example, what might you say to countries that would do the same thing?”

The Australian government has insisted the Nuclear Non-Proliferation Treaty does not prohibit the acquisition of naval nuclear propulsion by non-nuclear weapon states.

The Department of Foreign Affairs and Trade has accused China of making “numerous misleading and incorrect assertions” about AUKUS, saying Australia’s plan to acquire nuclear-powered submarines was “fully consistent” with its non-proliferation obligations.

In the interview, Xiao expressed frustration at the slow progress in repairing China’s troubled relationship with Australia.

He said he believed AUKUS was based on the perception China was a military threat to Australia.

While Xiao said Australia had no need for such powerful submarines as those proposed in the AUKUS agreement, two incidents in recent months have highlighted tensions over Chinese military operations.

In February, a Chinese Luyang-class guided-missile destroyer aimed a military-grade laser at a RAAF surveillance aircraft in the Arafura Sea, triggering an Australian protest.

Days after the federal election in May, a Chinese J-16 fighter jet intercepted a RAAF P-8 surveillance aircraft in international airspace in the South China Sea region and released metallic “chaff” that could have damaged the Australian plane.

The second incident deeply concerned ministers who saw it as an attempt to send a message to the new Australian government after it took power at the May 21 election.