‘Does she need help with how to use the carrier?’ Carrie Symonds sparks questions after she wears five-month-old Wilfred facing forwards for a stroll in Lake Como

Carrie Symonds has attracted criticism from parents on social media for how she wears baby Wilfred in a carrier while out for a stroll on an Italian promenade.

Boris Johnson’s fiancee, 32, is believed to be staying at the £600-a-night Grand Hotel Tremezzo in Lake Como on a girls’ holiday.

During her luxury getaway the new mother was seen cutting a casual figure in a £325 blue checked cotton gingham dress by Ganni and black Superga trainers as she wandered along the waterside esplanade with a friend while carrying five-month-old Wilfred in an Ergobaby 360 All Positions Baby Carrier.

The carrier, priced at £119.90, is intended for use with newborns aged up to four months and features an ergonomic design meaning babies can be carried forwards as opposed to facing inwards.

However, several people took to Twitter to call out the PM’s partner for wearing it ‘incorrectly’, with some expressing concern for the little one’s wellbeing. 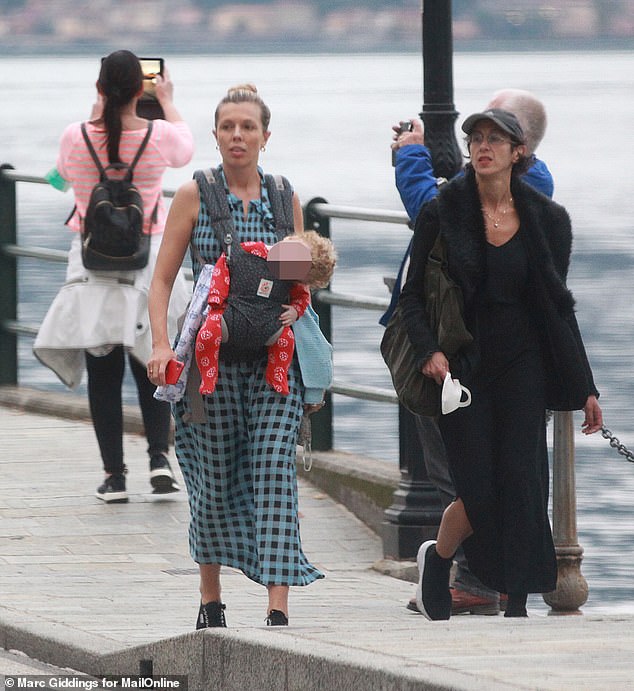 Carrie Symonds, 32, was seen strolling along a waterfront promenade with a friend while carrying son Wilfred in a baby sling

During her luxury getaway the new mother was seen cutting a casual figure in a £325 blue checked cotton gingham dress by Ganni and black Superga trainers as she wandered along the waterside esplanade with a friend while carrying five-month-old Wilfred in an Ergobaby 360 All Positions Baby Carrier, priced at £119.90

One tweeted: ‘For the love of God will someone teach @carriesymonds how to use a baby carrier properly. That poor kid is constantly been dangled by his crotch with his head all over the place [sic].’

Another wrote: ‘Dear @carriesymonds please will you google safe babywearing? He should be facing you and much higher up, close enough to kiss.’

And one commented: ‘Outrageous behaviour. Made worse by photo showing Wilfred’s head dangling off to the side without support. @carriesymonds needs some parenting instructions.’

According to the Ergobaby website, the ergonomic 360 All Positions carrier offers ‘every carry position’ with a forward facing option. 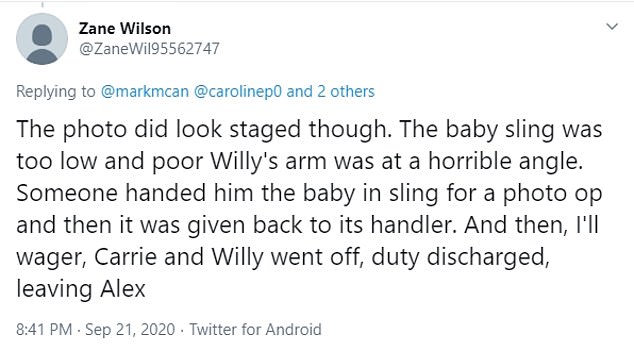 Several people took to Twitter to call out the PM’s partner for wearing their son’s Ergobaby sling incorrectly, with some concerned for the little one’s wellbeing

The carrier comes with a lumbar support waistbelt for extra lower back comfort, and adjustable padded shoulder straps for neck and shoulder comfort.

The criticism aimed at Carrie echoes that received by Boris after he was pictured carrying Wilfred in the same papoose on a walk in Scotland last month.

One tweeted: ‘Why is the baby sling that low down by his waist? He looks dishevelled even when sporting a carrying device for the baby.’ 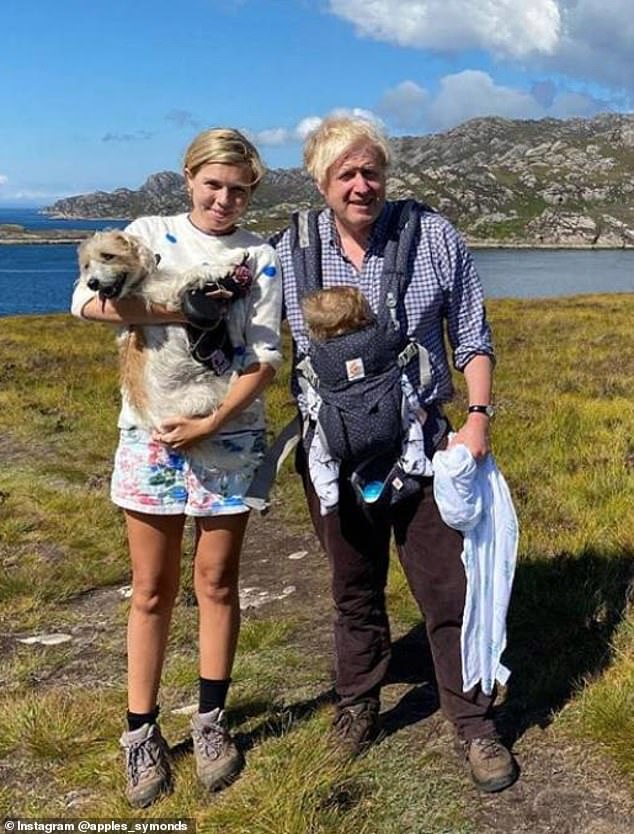 Carrie has been spending a few days staying at the luxurious lakeside hotel, which is a favourite with the super-wealthy where a two-day stay in a suite can cost more than £6,400.

A British holidaymaker told MailOnline: ‘Carrie seemed very relaxed. She was smiling and laughing with her friends. It was as if she didn’t have a care in the world.’

Carrie’s relaxing break came as the Government made a grim assessment about the nation’s job prospects and economic state.

Despite all this, Mr Johnson’s fiancée didn’t appear to have any worries as she enjoyed her holiday at a hotel which is considered one of the finest in Europe, popular with wealthy Americans.

T is for Tight: Slings and carriers should be tight enough to hug your baby close to you, as this will be most comfortable for you both. Any slack/loose fabric will allow your baby to slump down in the carrier which can hinder their breathing and pull on your back.

I is for In View at All Times: You should always be able to see your baby’s face by simply glancing down. The fabric of a sling or carrier should not close around them so you have to open it to check on them. In a cradle position your baby should face upwards not be turned in towards your body.

C is for Close Enough to Kiss: Your baby’s head should be as close to your chin as is comfortable. By tipping your head forward you should be able to kiss your baby on the head or forehead.

K is for Keep Chin Off Chest: A baby should never be curled so their chin is forced onto their chest, as this can restrict their breathing. Ensure there is always a space of at least a finger width under your baby’s chin.

S is for Supported Back: In an upright carry, a baby should be held comfortably close to the wearer, so their back is supported in its natural position and their tummy and chest are against you. If a sling is too loose, they can slump which can partially close their airway. This can be tested by placing a hand on your baby’s back and pressing gently – they should not uncurl or move closer to you.

A baby in a cradle carry in a pouch or ring sling should be positioned carefully with their bottom in the deepest part, so the sling does not fold them in half pressing their chin to their chest.