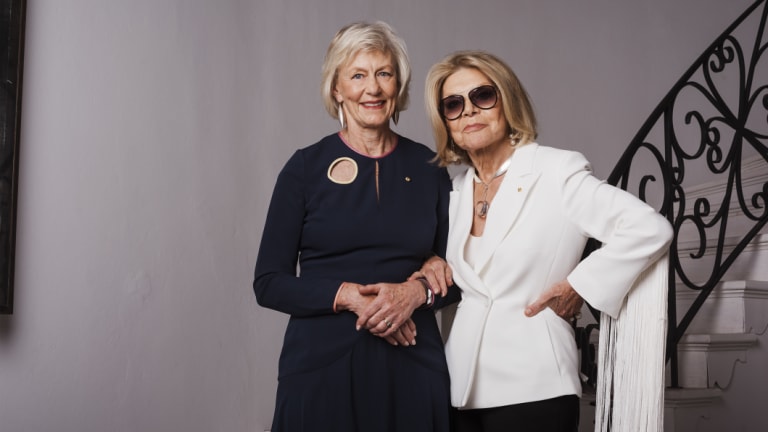 “We have no expectations of each other, but we’re there if we need each other.”Credit:James Brickwood

JILLIAN: Carla and I have a lot of fun together. One Sydney Festival she said, "Let's go and see Grace Jones." I said, "We can only get tickets in the mosh pit. We don't want to be in there standing up all night." "Oh yes we do," said Carla. Off we go and we're in this mosh pit, everyone's standing up, and I went to get some water and said, "Make sure we don't lose our spot." When I returned, she'd worked her way to the front. We had a wonderful night.

We met in the 1980s through women's business circles, and although we are very different, we were drawn to each other by our common interests in the arts and business, and our strong feminist views. She makes me laugh at times. Once we were at a Tom Roberts exhibition and she said, "It's interesting how the men's jackets have three buttons, and they're now going back to that." I said, "What an extraordinary thing to observe." It is fascinating when she sees something quite different to what I see.

She's always giving me tips about style. I might say, "I like what you're wearing," and she'll say, "You could wear that." I used to wear more of her label than I do now, because often we'd turn up in the same thing. When we were both on the Art Gallery of NSW board, I wore the same thing she did one night, then it happened again. She said, "Oh no, don't worry; yours is last year, mine's this year." I said, "But it's the same fabric and very distinctive." After that, I stopped wearing her clothes so much.

Once we were in Paris together and it was really hot; I was feeling faint. There were no park benches so Carla, trying to help me, said, "Come into this shoe shop and sit down." We went into this elegant shop and I felt a bit uncomfortable, then Carla said, "She'd like to try on those shoes." The shoes had extremely high heels, so I'm sitting down trying to get my energy back, at the same time trying on these impossible shoes. Carla is saying, "Stand properly," and I'm saying, "I can't, but I think I'm feeling all right now, we can go." I felt a bit bad for the shop-owner.

Carla is a loyal, supportive friend who imagines my capacities are way beyond what they are. "You can do this," she says, when I am thinking, "No, I can't." The fact she has such confidence in me does make me believe I can do it.

The one thing we disagree about is politics. Carla is very loyal to the Liberal Party and is friendly with [Sydney radio host] Alan Jones. We tend not to go there when we talk, although recently she said something about Jones, and I said, "Look, he didn't do this and he didn't do that. I'm just telling you, so you keep your view up to date."

I love her company and that we share so many interests. I admire her style, intelligence, business success, determination and her three children … all in one, a very warm package.

CARLA: When I met Jillian, I thought she was attractive and straight-shooting, and intellectually amazing. When I was appointed as SBS chair no one on the board knew anything about finance, so I suggested her. That was when our friendship really developed, because we had the opportunity to get together before and after board meetings and discuss personal things. It was wonderful to have another woman to compare notes with about children [Jillian has two], work and business frustrations.

Jillian has never been a "yes person". I remember one occasion after an SBS board meeting, saying, "Jilly, I would have expected my friend to support me," and she said, "I don't have to support everything that you put forward." I thought, "Fair enough, that is perfectly reasonable." I can rely on Jilly to tell me whether or not something is a good idea.

I know if I call on Jilly, she'll be there. We were both in Paris when John [Zampatti's second husband, John Spender, then Australian ambassador to France] and I split up. We had breakfast together and I told her I didn't think the marriage would last. She was very comforting. It was tough, but having her there was magical.

I have absolute trust in her, so if she suggests something, I will definitely consider it because I know she wouldn't ask me to support something she didn't really believe in herself. When she asked me if I'd like to design costumes for the women in the Australian Brandenburg Orchestra, where she was on the board, I agreed.

Jilly and I have travelled a lot together, to India, Vienna, Budapest, Venice, often with our friend [businesswoman and former Louis Vuitton Australia CEO] Julia King. It's wonderful travelling with women: it's friendly, it's fun, it's unexpected. You're not looking after anyone, as you are when you travel with family, you're just all there to enjoy yourselves. Jilly and Julia do all the research; I just follow them.

Our fundamental values are the same. We both think the same things are important in life: family, friendships, integrity. The only thing we disagree about is politics, but it's always a bit of a joke. I call her a Bollinger socialist; she calls me right-wing. It never causes any real friction.

Our friendship is warm and affectionate, but not intrusive. We have no expectations of each other, but we're there if we need each other. That independence of spirit is another thing we have in common. She's very independent. She refuses to take any driving directions from me. If I try, she says, "No thank you, I'm driving, my friend, save that for somebody else."

We talk a lot about our children. Every now and then one doesn't talk to one's child, or they don't talk to you, and it can be upsetting. When I discuss it with Jilly we laugh, and it all seems much lighter, and I become a bit more tolerant. She's a very important part of my life and the sister I never had. I hope I add value to her life, because she's lots of fun.

To read more from Good Weekend magazine, visit our page at The Sydney Morning Herald, The Age and Brisbane Times.