Sometimes when you have sky-high expectations for a film, there’s nowhere to go but down. Even when the focus is a superhero — scratch that, superheroine — that flies. Enter Captain Marvel, the first female to get above-the-title treatment in the Marvel Comic Universe. That is no small deal. Her film, alas, is no epic.

To be fair, any Marvel movie that has the misfortune of being sandwiched between two Avengers extravaganzas is bound to underwhelm. (See: Ant-Man and the Wasp). But given the historical significance, there’s disappointment in a dueling-alien-race mishmash that succeeds more as an amusing fill-in-the-blanks Marvel backstory provider than a confident stand-alone tale of a woman discovering her fierceness.

Confused yet? Wait until the blue blood starts trickling down from the face of star Brie Larson Opens a New Window. . This would be the opening moment, and the feeling of desperately trying to play catch-up starts from there. Larson is Carol Danvers, a member of the U.S. Air Force. She’s athletically average but gets back up every time she’s knocked down. Her wing-man is an adorable cat named Goose (yay, Top Gun). Her mentor/advisor (Annette Bening) barks to her about winning the war. Then an evil alien race invades Earth, stages a battle and kidnaps Carol. It’s 1989. 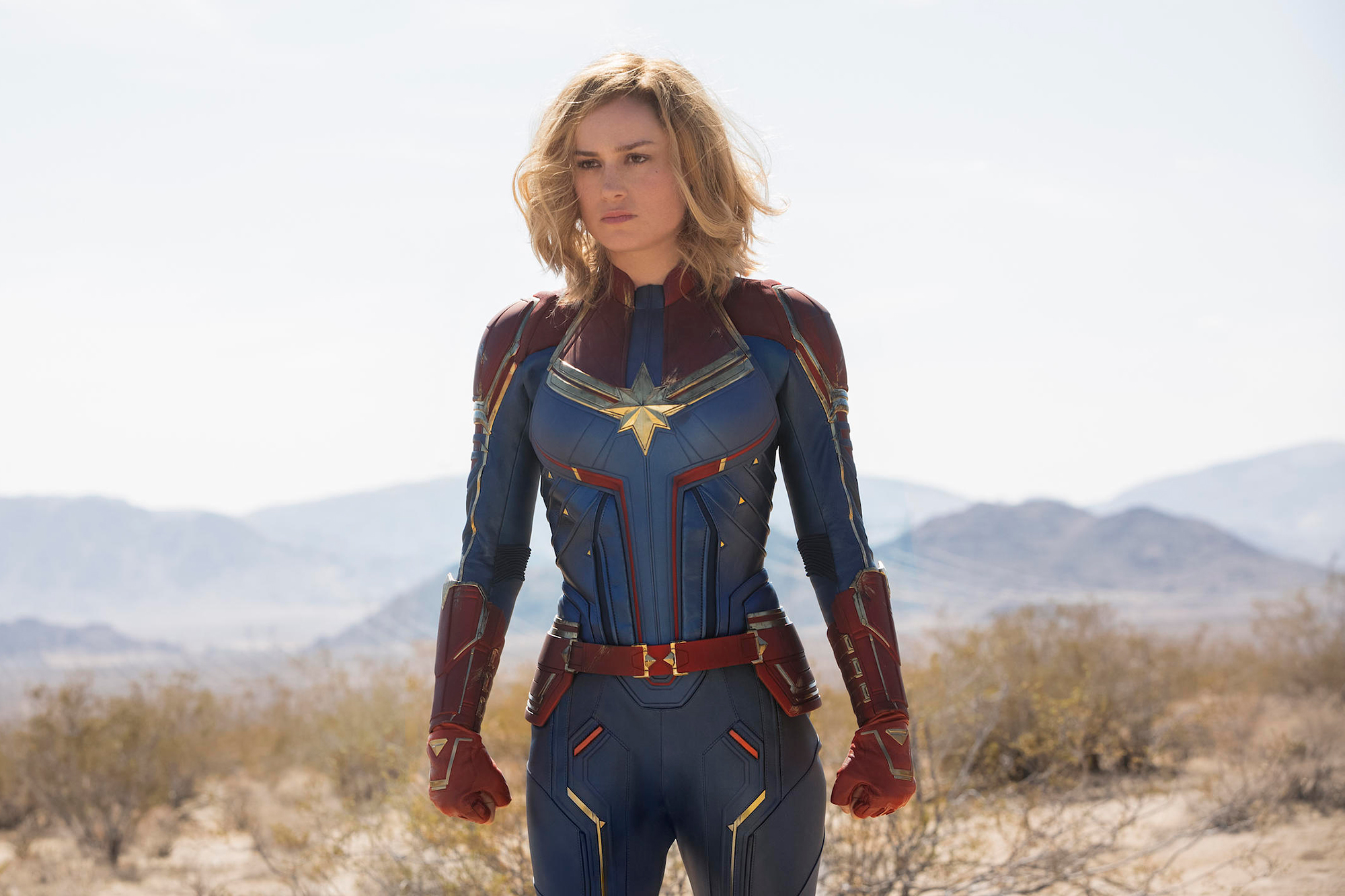 Six years later, Danvers is part of the Kree alien race in another galaxy. She has no memories of her previous life. On the upside, she now has the superhuman ability to fly and shoot off energy blasts from her hands. (Ask a comic-book savant if you want to know its specific name and power.) Krees’ alien rivals, the Skrulls, can shape-shift into any human.

They want to retrieve a powerful energy-seeking flying vehicle located somewhere in the Earth’s orbit. That means Danvers must go back to Earth, dubbed C53, and stop them. She lands smack in the middle of an empty Blockbuster Video store and soon meets S.H.I.E.L.D Agent Nick Fury (Samuel L. Jackson Opens a New Window. ). Away they go!

That’s the untangled version of the exposition. Most of it is non-linear, fragmented together as Danvers’ memories flood back. Such a risky device for an origin story with several new characters — and one that doesn’t pay off in the long run, especially during the more tedious stretches. What a welcome relief when Larson arrives in that Blockbuster in 1995, if only because the sight of her walking through the VHS-laden aisles provides rich nostalgic familiarity.

Is the scene worth a rewind? For a comic-book adaptation with an all-over-the-place tone, the answer is a soft yes. Between obvious kitschy period humor and the intergalactic miscommunication jokes, Captain Marvel is clearly aiming for a Guardians of the Galaxy vibe. Results are mixed: An Arnold Schwarzenegger sight gag, a flannel wardrobe and clunky computer bits provide effectively big laughs; calling Earth “a sh—thole” and a joke in which Fury pulls over a sheet so he can take a gander at alien’s private parts are meh. A whopping six writers are credited with Captain Marvel. That’s the best they could do. 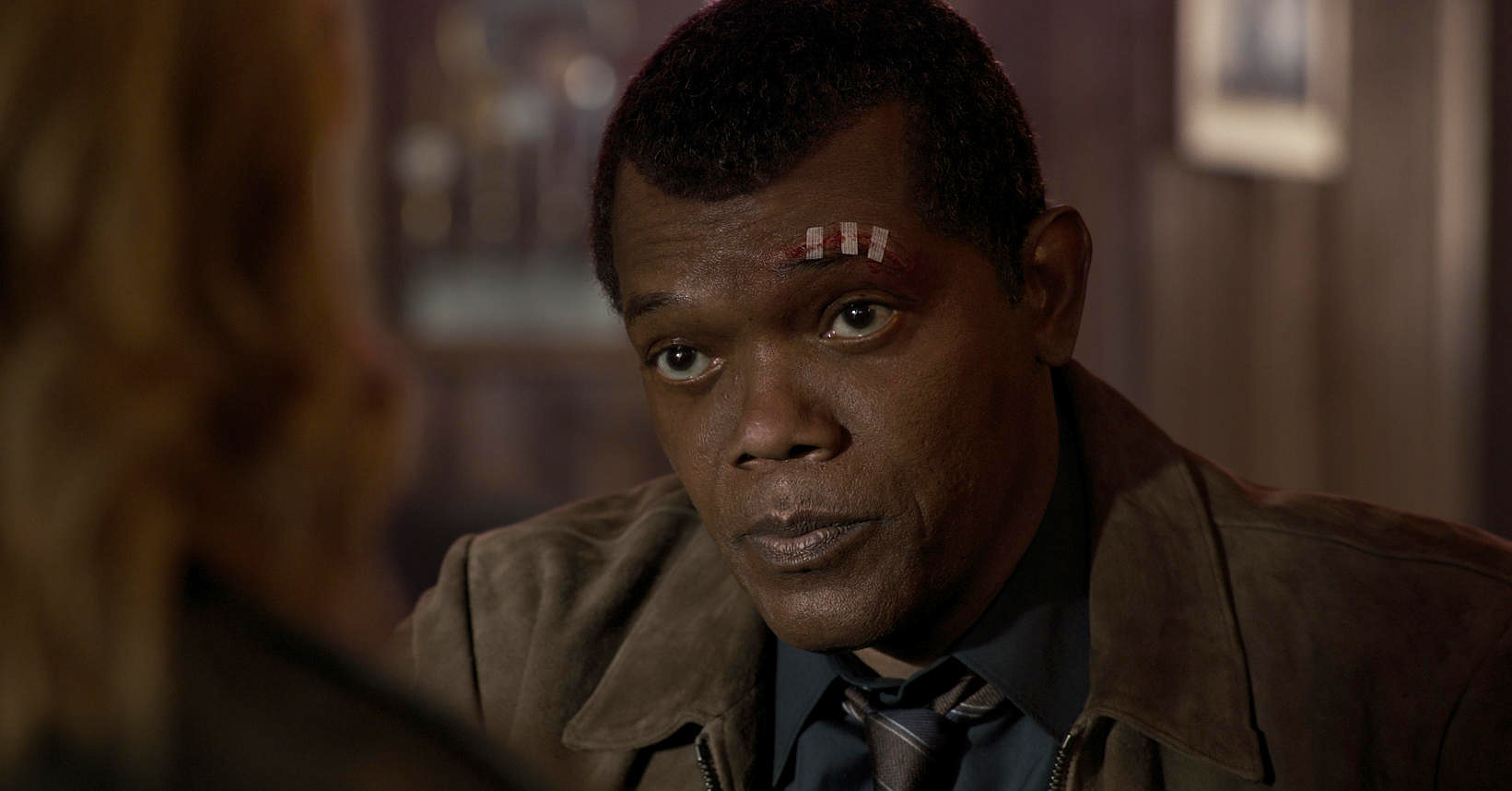 It would have been nice had one of those writers told Larson about the comedy shifts. The talented Oscar winner looks uncomfortable during the lighter moments, lacking that necessary glint her eye. She killed it in 21 Jump Street and Trainwreck. She can do comedy without being the female version of Robert Downey Jr. In certain scenes, her best friend (Lashana Lynch) and her scrappy young daughter steal the movie right from under her! And in a head-to-head bad-ass-ness battle, I’d put my money on Scarlett Johansson’s savvy Black Widow. Perhaps Larson will grow into the role. For now, thank the Norse God for series vet Jackson. He livens up the movie and is a strutting, swearing Marvel history book.

The shortage of pizzazz and the heavy reliance of in-jokes and special effects add up to a standard-issue entry in the comic-book cannon. A groundbreaker like Captain Marvel — she’s the franchise’s new leading lady! — deserves better than that. At least she’ll get another chance as soon as April in Avengers: End Game. If she uses her power and tips the scales to save Spider-Man, Black Panther and Doctor Strange, then all will be forgiven. Well, most will be.