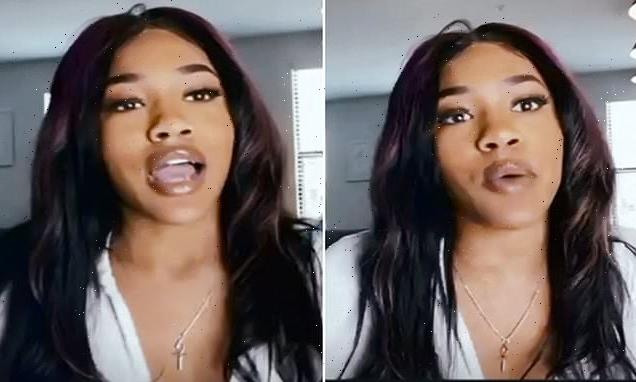 ‘I fed people lies, I made no money’: Would-be forex traders reeled in by ‘get rich quick’ lifestyle promoted on Instagram tell documentary they spent their time selling ‘education packages’ and didn’t even know how to trade

A woman who claims she failed to make any money while working for a multi-level marketing firm has admitted she ‘fed people lies’ to recruit them in order to dodge the hefty membership fees in a shocking new documentary.

BBC Three’s Instatraders delves into the recent foreign exchange craze on social media, where slick Instagram accounts and YouTube channels point to forex trading – betting on the value of a currency going up or down – as a route to earning extra cash.

But Birmingham-based BBC reporter Dion Hesson discovered it’s harder than it sounds to make a living from trading when you’re a total novice.

But despite generating a small profit from his £100 trade, he realised he would need to invest thousands to cover his £202 membership fee, £240 sign-up fee and ongoing education alone. If he wanted to take home £1,000 a month, he’d need to be trading with over £13,000.

Dion also explored the other side to the company – the recruitment and referral strand – where people are encouraged to sign up new members in exchange for commission and waiving their membership fees.

He spoke to several critics of IM Academy, some of whom openly claimed they ‘sold people a dream’ that didn’t exist. 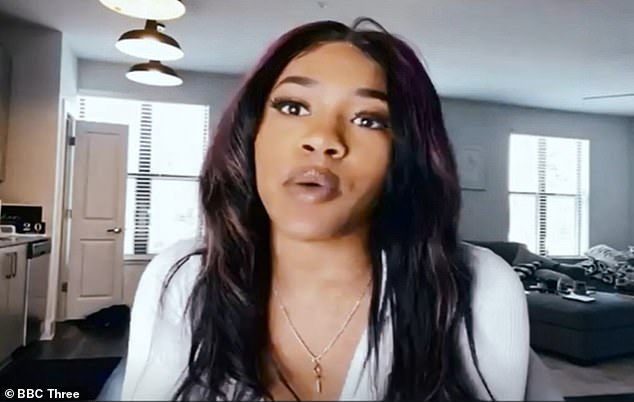 One woman from the US, known only as Asha, said she worked the ‘hardest three months of her life’ and failed to make any profit.

‘If anything I was feeding people lies because I was saying I was making money and I had made not one bit of money,’ she told Dion. ‘The three months I worked there, I worked harder than I ever worked in my whole entire life and still didn’t make no money from it.

‘I didn’t even know how to trade, but I know how to recruit, which is weird. But I was very excited to get people the opportunity to make money, so I was selling them false hope, but also excited to sell them the hopes because I was still believing in the plan.’

Another ex-IM Academy member, called Darius, claimed the company has a ‘real way of pulling people in and keeping them, selling them a dream and a hope’.

‘I was bringing people in that were wanting to learn to trade just like me even though I didn’t know how to trade. So that was tricky once they got in,’ he said. 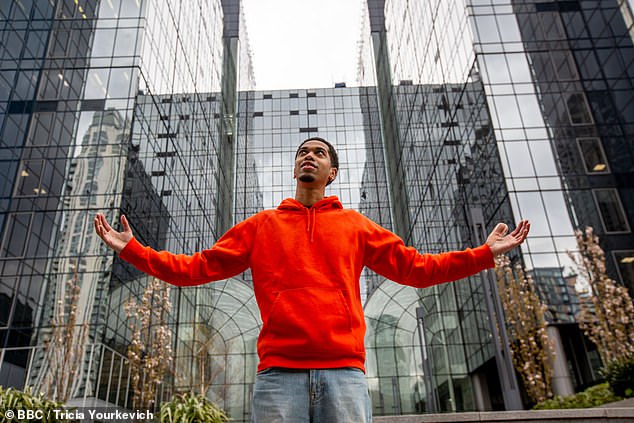 Meanwhile Frank, who joined IM Academy to learn how to trade, ‘not how to recruit’, said he lost $5,660 in the forex market.

Dion also spoke to current ‘mentors’ within IM Academy, none of whom would reveal what they earned, claiming it went against company rules to do so.

IM Academy policy forbids members from making income claims on social media, websites and videos, which covers what they make through trading and sales, including lifestyle claims and photos of things like cash, fancy cars and yachts.

One, known as Junior, said he made ‘enough’, describing it as ‘mortgage money’ and ‘a very sexy amount of money’.

Another mentor called Anika, who was secretly recorded delivering a seminar, urged people to try to recruit IM Academy members at their local supermarket, branding the service she offers ‘a form of charity’.

‘When you go Tesco, when you go Asda, I try to go to a till where I see someone youngish that looks a bit driven, that looks like they don’t really want to be there. Then I say, “Are you open-minded to making extra income?”, with a big smile on my face [sic],’ she explained. 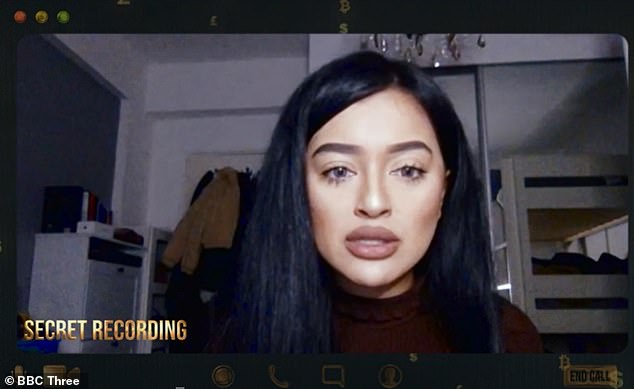 Another IM Academy mentor called Anika, who was secretly recorded delivering a seminar, urged people to try to recruit members at their local supermarket, branding the service she offers ‘a form of charity’

‘I don’t use the word trading anymore, I’m like, “Have you heard of residual income?”. Let’s not feel shy about it. We’re not shy to make money, we’re not shy to help other people.

‘A lot of people’s reasons why is to impact the world, is to build an orphanage, is to build a place of worship, is to help other families, to help the poor, right, but this is literally, to me, in my eyes, it’s a form of charity because you are helping someone else. 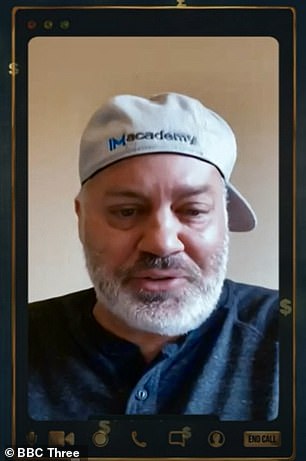 But a study of amateur forex traders like Dion – who completed the IM Academy training that came with its elite package – showed four in five lose money. However, IM Academy doesn’t monitor its students’ trading so it doesn’t know if it counters this trend.

The documentary also featured videos posted by IM Academy’s CEO Christopher Terry, including one in which he appeared to advise members to distance themselves from their family if they don’t support their ‘dream’.

During a Panda Takeover Zoom he shared a holiday message, urging members to ‘change your energy to become something else now… to a billionaire mindset’.

‘Do not allow any of your friends and family through these holidays to try to steal your dream,’ he added. ‘Do not. If anybody says anything about you, you put your hand up and say no.’

Dion claimed he attempted to reach Chris Terry and even wrote a letter when emails went unanswered. But when the team visited addresses in the US listed as belonging to the company, one was a postbox while another was at the Rockefeller Centre in New York, but there was ‘no sign of them anywhere in the building’.

Its registered address in Northern Ireland was also reportedly that of lady who registers companies.

MLM expert Robert Fitzpatrick, who has been investigating companies like IM Academy for 30 years, said forex trading is a good product for a MLM to sell because ‘no one knows what it is’. 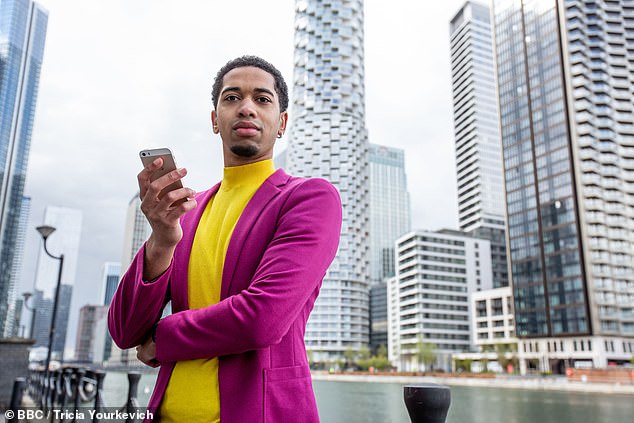 Dion claimed he attempted tor each Chris Terry and even wrote a letter when emails went unanswered, but when the team visited addresses in the US listed as belonging to the company, one was a postbox while another was at the Rockefeller Centre in New York, but there was ‘no sign of them anywhere in the building’

‘Forex trading, who knows what that is? But trust us, there’s a lot of money to be made over there, but you’re also told bring some other people in too. Each person that comes in has to pay money to get in, so there’s another source of money that’s actually you, it’s you and your friend’s money, so that’s what MLM is, it’s your own money at work, not the money over there where they tell you you could be going to make money.’

What is Forex and how does the market work?

Forex, or foreign exchange, sees traders across the world buy and sell currencies between each other.

Just like a holidaymaker would transfer their home currency into the one used at their destination, companies and central banks need to transfer huge amounts of money across borders to buy products or services.

This is the practical use of foreign exchange, but most transactions are done by traders looking to make a profit.

The amount of currency traded each day makes the price of each one very volatile, so traders look to buy one when it is cheap and sell when the price rises. .

Publicly-available apps include live figures and charts to allow traders to identify when is the best time to sell.

However, Forex trading is very risky, and no amount of skill or expertise can guarantee a profit.

He added that claims you have to work hard to be a big earner in the game are simply ‘preparing you for losing your money for a while’ which will ‘keep you in a  bit longer’.

‘They have still massively underestimated the true amount of time and experience you would need to do this professionally and to make money,’ Robert went on.

‘The reason these things don’t work is because the numbers don’t add up, you can’t keep expanding. Very soon you don’t find enough people out there to pay the earlier people and then the thing collapses.’

IM Academy’s own income disclosure figures from last year in the US revealed only those at the very top were six-figure earners, while two thirds earned less than $500 a year.

IM Academy said in response to the documentary: ‘IM Academy does not sell or promote the prospect of a large, fast return and instant profit. We do advise that is anyone wants to trade they should take personalised advice before doing so from a licensed broker or financial advisor.

‘People who earn through IM only receive commissions on sales to retail customers of IM Academy’s educational products and services. The vast majority of customers are retail end consumers who do not participate in the multi-level marketing programme that our business model is based upon.

‘IM has an in-house team that is dedicated to monitoring the activities of IBOS and to ensure that no misleading or exaggerated claims are made about the company’s products or services or about the business opportunity that we present.’

Dion also investigated a company called FTMO, founded in Prague by two university friends. It claims to offer funding for ‘serious traders’, helping people make profit through forex trading, without risking any of their own capital.

He travelled around the UK and Ireland to meet smart, driven and hopeful traders who were investing substantial time and money in FTMO ‘challenge’ fees and education, with the aim of trading with the company.

But when Dion took a closer look at its terms and conditions, he discovered that traders who passed the challenge were then trading on a demo account with fictitious funds, and that it is up to FTMO whether any of these trades are executed in the real world or not.

Instatraders is available to watch now on BBC iPlayer.