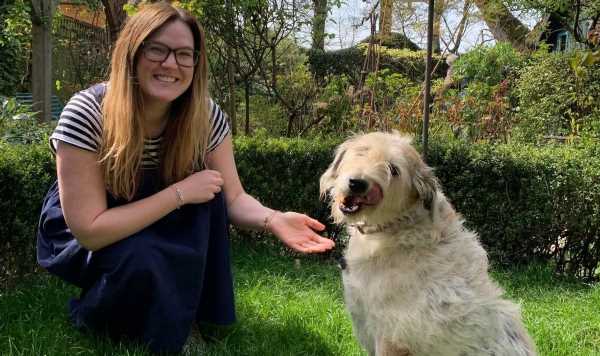 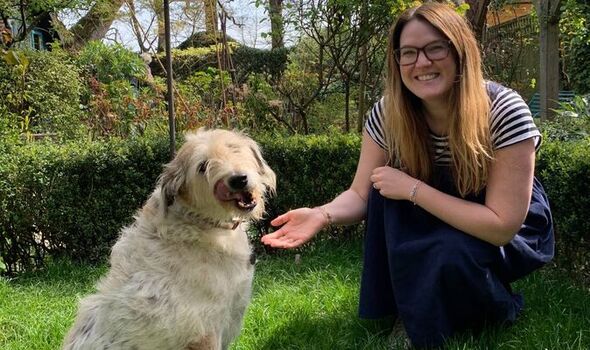 As I peer into two large nutbrown eyes, I try to focus on Ted. What is he thinking? How is he feeling? I’m hoping that whatever I’m about to find out will heal our strained relationship.

I’m not getting up close and personal with my partner. Ted is my dog. And I’m trying to read his mind.

Ted looks back at me, then bends down to lick his outstretched paw. But Ted and I have never quite seen eye to eye.

A big lumbering Romanian street dog, he was rescued by a charity at two years old and came to live in Didsbury, Manchester, with my family, fresh off the truck.

It’s safe to say that he wasn’t house-trained. In fact, he spent that first year weeing all over the place, chewing everything that wasn’t screwed down and growling at anyone who came within 10ft of him.

“He’s been through a lot. He can’t help it,” my mum would say as I waved another chewed shoe at Ted, threatening to release him into the wild.

Flash forward to now, and Ted is pushing 10. I’m pleased to say our relationship has softened, but I still get grumpy when he barks at 4am, sheds hair all over my clothes and steals food from my two-year-old daughter Molly.

So when I heard about Beth Lee-Crowther, a pet psychic, I was intrigued.

Having helped owners connect with their animals for many years, Beth claims to be able to talk to our pets – from cats to chameleons – healing tensions, strengthening bonds, and encouraging humans to understand what’s really going on in our companions’ minds.

And, she insists, we can do it too – all it takes is a little practice.

“We’re a nation of animal lovers – they give such comfort and enrichment,’ says Beth, 52, who lives in Malvern, Worcestershire, with her partner Nigel and their four dogs.

“And in this country we have more pets than ever after the pandemic, so it’s never been more important to understand them.”

Beth says you can talk to any pet, be it a dog, cat, bird, rabbit, snake or bearded dragon.

“I’ve talked to them all,” she says. “It’s a universal language of words, pictures, feelings and senses such as smell and taste.”

Getting inside your pet’s mind can lead to real breakthroughs. “Sometimes owners opt to rehome a pet when talking to them first could heal that broken bond,” says Beth, who has communicated with animals since a child.

“I would know how they were feeling – if they were happy or sad,” she says. “At ever first I thought it was normal, but as I got older I realised people weren’t experiencing the same things.”

Beth began a career as a nursery nurse, but always retained an interest in all things psychic.

“As an adult, I was lucky enough to chase my own ponies, and I realised I could understand them.”

Wanting to test her abilities, Betht a note on an internet message ard asking strangers to send her pictures of their animals for readings.

“It was amazing, people were saying, ‘There’s no way you could have known this’,” she says.

Over the years, she’s come to the aid of hundreds, reuniting lost dogs with families, and helping owners understand past events that have led to current behaviour.

“I’ve recently helped George the border collie overcome issues at home, explaining to his owner that he’d been shut indoors at his previous residence,” says Beth.

Keen for a better relationship with Ted, I nestle down with him to begin our session. And I tell Beth I’m sceptical.

Beth studies Ted, who is curled up, his barrel-like body softly moving in time with his breath.

“The thing I’m getting loud and clear is how grateful he is to be here,” she says. “There’s such relief.”

I instantly soften, thinking of the cage he was rescued from in Romania, and the heavy chain once attached to him that has caused him to walk slightly sideways like a crab.

Is there someone called Rose, she asks?

UP and “With what he’s been through, you would not expect him to be so kind,” she tells me.

“But he really delights in being fussed over and loved.”

I give Ted a tickle. He certainly had a rough start in life. Perhaps I shouldn’t be so hard on him. Now it’s my turn.

First, Beth sends me a photo of one of her pet pooches, Vivienne, a four-year-old chihuahua-Jack Russell cross, and tells me to study her closely and say what I see. “There’s no pressure when you practise with a pet you don’t know,” she advises. I begin to talk.

“She’s a dog who knows what she wants,” I tell Beth, feeling stupid as I say it. “She’s sassy, a good judge of character who doesn’t suffer fools and will bark when frustrated.

“But she’s a softy who loves nothing more than sitting on her favourite blanket and being treated like a queen.”

”Is there someone called My is Molly Spooky!

Beth exclaims: “That’s exactly what she’s like. You’re spot on.

“Her name was Princess before we had her.”

I must admit I’m taken aback. All that from a photo of a chihuahua.

And so it is with renewed excitement that I then turn my attention back to Ted. I take some deep breaths, close my eyes, and tap my forehead seven times – as advised by Beth – to get in the psychic zone.

As directed, I picture Ted in a familiar place – the park opposite our house. Eyes closed, I see him, wildflowers brushing his legs as he runs towards me.

Waiting, I strain, trying to see anything else. But nothing comes and I feel disheartened. I tell Beth I’m disappointed.

“He ran towards you – this means he wants to talk.

“Now, all you have to do is practice.”

As our call ends, I promise her I will, and head to the kitchen to find Ted a treat. I’m shocked by how warm I feel towards my mutt.

Perhaps talking to him wasn’t so barking mad after all.