Brigitte Macron left her ‘nice but boring’ husband for a passionate life with Emmanuel – but has found herself in the role of a ‘pretty but useless’ First Lady, new book claims

Their unconventional romance has always been the subject of much fascination, but a new book on the love story between Emmanuel Macron and his wife Brigitte suggests the First Lady of France has been left disenfranchised by their union.

Explosive book Il Venait d’Avoir 17 (He Had Just Turned 17) by French journalist Sylvie Bommet, which has just been published in France, retraces the life of a figure commonly referred to as ‘potiche’ – a word used to describe pretty but useless women.

According to the novel, Brigitte, now 66, left a boring marriage and defied her traditional upbringing in the hope of a more exciting life with a younger man – but the reality of her life is now very different.

Despite rumours that she’s an expert manipulator, whispering in the ear of the President and having him act on her political desires, she’s in fact completely stifled and controlled by his communications team, the author claims.

Brigitte Macron, 66, met her husband when she was 39 and him 15. A new book claims the once audacious woman has become a more controlled and cautious First Lady than most (pictured: Brigitte Macron during the Paris G7 in February) 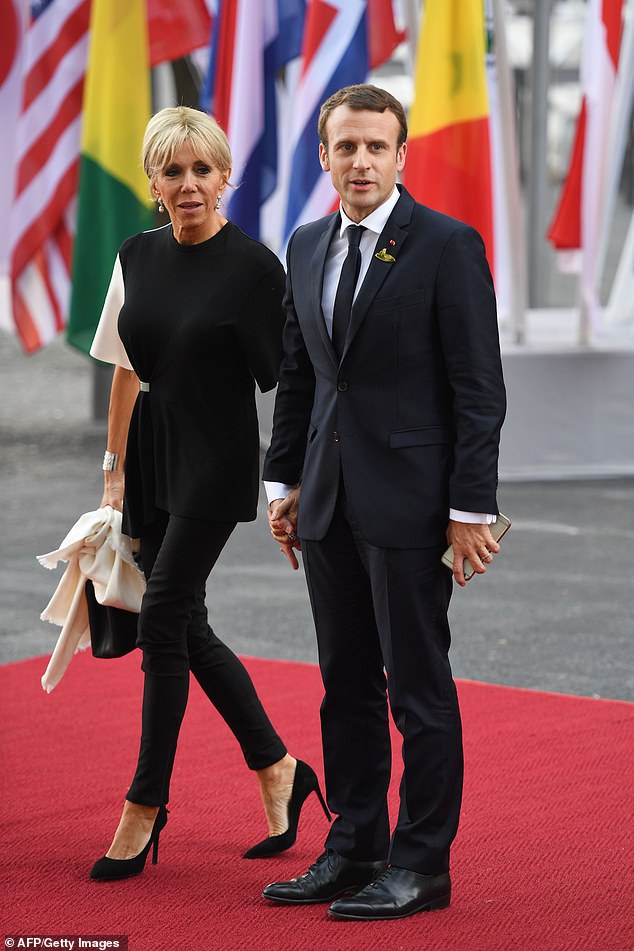 Their love story fascinates everyone. Being 24 years apart, the pair (pictured in Hamburg in 2017) dated for 12 years while Brigitte was still married to her first husband 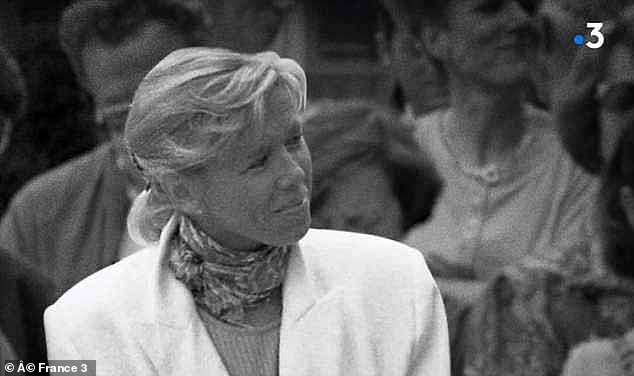 Pictured as a young woman, Brigitte tasked herself to become the perfect housewife and mother. As a first lady, she pales in comparison to other ‘President wives’, the book claims

Bommet conducted her research by visiting every city or town Brigitte set foot in before becoming Macron’s high profile wife.

She explains that when rumour had it Macron might be gay and having an affair, an earnest Brigitte went to the press, with pictures, and unveiled the secrets of their passionate love life.

The photographs, portraying the couple’s lavish lifestyle, angered the French public, Macron’s political adversaries and his own chief of communication.

Emmanuel had to issue a public apology on behalf of his wife ‘who wasn’t used to the media’, and ever since, Brigitte’s publicity has been very closely handled by the president’s communication team. 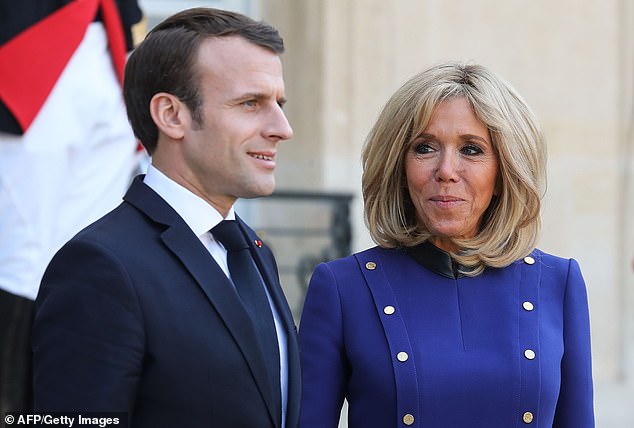 The couple are reportedly deeply in love. Brigitte left her first husband – with whom she had three children – after 12 years spent dating Macron on the weekends

According to Bommet, Brigitte has since become a ‘ghost’ and lost her own agency when Macron became president. She goes on to compare her to the wives of Francois Mitterand, Jacques Chirac and Francois Hollande.

While Francois Mitterand was in charge, between 1981 and 1995, his wife Danielle presented herself as an activist and humanitarian. She even defied French police authorities by embracing Fidel Castro and inviting him to France in 1995.

Jacques Chirac’s wife Bernadette, while shy and demure, became the president of the ‘Yellow Coin Operation’ in 1994. The campaign, created in 1990, still exists and aims to provide care for hospitalised children and their families.

Bernadette became extremely invested with her work with the association and is still active to this day, at age 85. 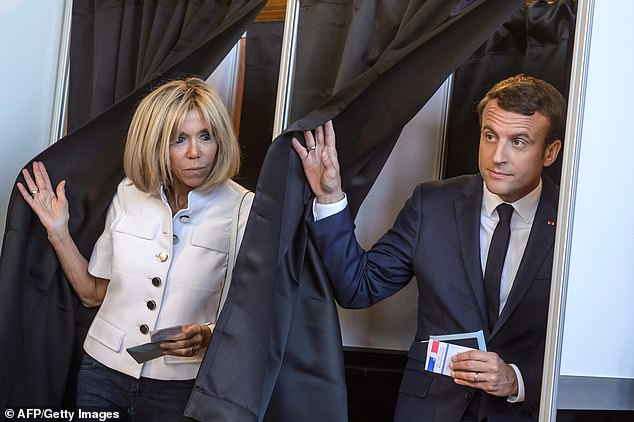 A couple that votes together stays together: The Macrons pictured during the first round of the French legislative elections in 2017. Sylvie Bommet claims that, compared to other wives of French presidents, Brigitte has failed to make her mark in the post 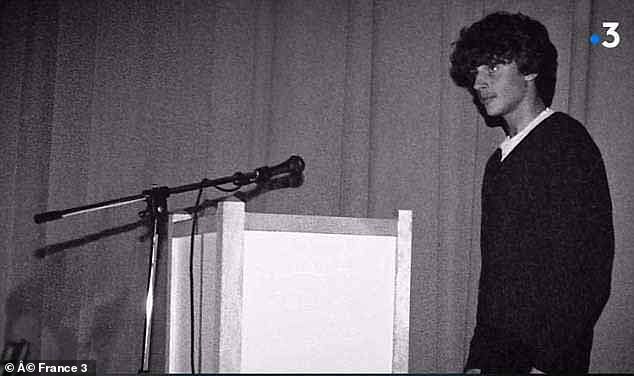 Pictured: A young Emmanuel Macron. Brigitte, who was raised in a traditional way by respectable parents, allegedly lost her head to the brilliant ‘overachieving’ student 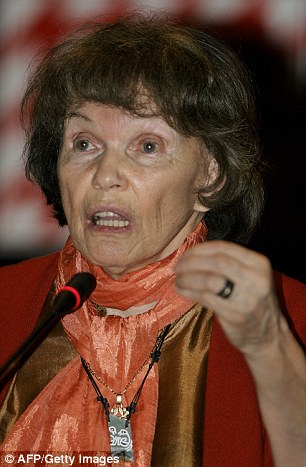 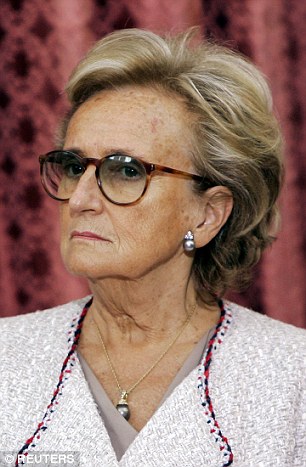 Danielle Mitterand (left), who died in 2011, carved out an identity for herelf as an activist and humanitarian. Bernadette Chirac (right) is known for her Yellow Coin Campaign to help sick children and their families

Meanwhile the estranged wife of Macron’s predecessor, Francois Hollande, made a somewhat infamous name for herself by dishing out on the president and their marriage while Hollande was still in office.

Bommet’s argument is that Brigitte pales in comparison to these other ‘president’s wives’, as she is reduced to her wardrobe choices and her age by the media and not invested in much else – at least publicly.

The book also claims that while Brigitte, an educated and modern woman, is often seen on the covers of magazines, she rarely speaks out on contemporary issues and fails to hold a firm position on any of them. 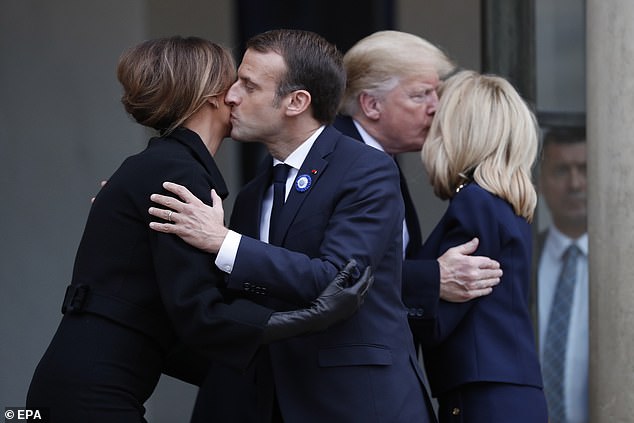 The friendliest of welcomes: Sylvie Bommet claims Brigitte is yet to stand her ground on contemporary issues and adds that while the French Lady expressed her support for the #MeToo movement, she seems delighted to welcome Donald Trump in November 2018 (pictured) 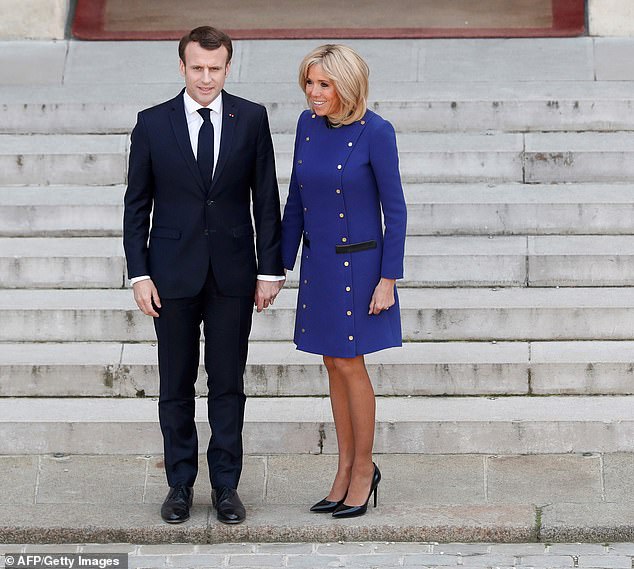 Since Macron became France’s president in 2017, his wife has made the cover of countless magazines and wowed with her fashion choices, but has remained relatively guarded, the book claims

Bommet paints Brigitte as a brilliant woman seduced by her ‘intellectual affinity’ with her young student, who later becomes content with being silenced and ‘friends with everyone and anyone’.

Since Macron launched his bid for the presidency back in 2016, and after he won the election in 2017, all eyes have been on him and his wife, who is 24 years his senior.

The couple, who met when Macron was just 15 and Brigitte 39, share an atypical romance, to say the least.

The pair met in high school, with Macron the brilliant student falling fast and hard for the passionate literature teacher. The two grew close, especially after Macron, then 16, joined the school’s drama club – managed by none other than Brigitte.

The book, however, blasts rumours that Brigitte and Macron started dating when he was 15 and a student in the high school where she taught.

Instead, Bommet recounts a long 10-year period where the couple would only see each other on weekends while Macron studied in Paris or Strasbourg, and while Brigitte was still married to her first husband.

At the time, Brigitte was wedded to Andre Auziere, a quiet man who was more demure and taciturn than the ‘fun-loving’ and ‘exuberant’ Brigitte, described by her friends. 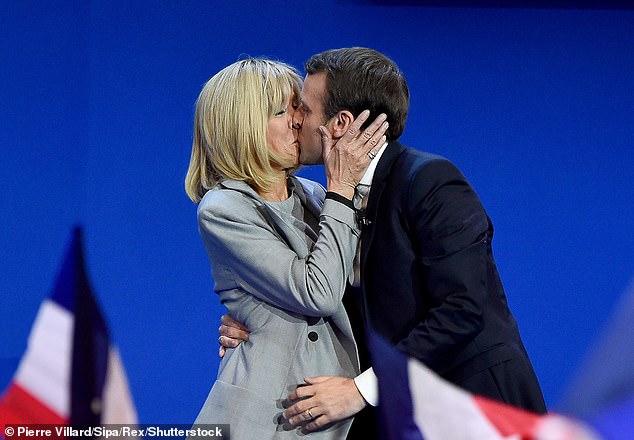 A love like no other. Sylvie Bommet agrees that the couple – first lady included – seem perfectly content with their situation

The couple had three children – the eldest being the same age as Macron.

Before she met Emmanuel at the school’s drama club, Brigitte worked hard to be the perfect housewife for her banker husband, described as a ‘nice man with a strong moral compass’ by some family friends and as a ‘kill-joy’ by others.

As a child and teenager, Brigitte was described as somewhat ‘rebellious’. But leaving her husband for a teenager not even half her age is about the most scandalous thing the mother-of-three – and grandmother – has ever done.

Human Ken Doll Is Back! Hear All About His 900+ Cosmetic Surgeries in Botched Sneak Peek

The return of the Human Ken Doll. Justin Jedlica, who appeared on the very first episode of Botched when it...