Virtual Boris addressing the Commons is like watching a goldfish bumping against its bowl, says HENRY DEEDES

Boris Johnson was moving through the gears nicely in the Commons yesterday as he laid out next week’s post-lockdown restrictions.

There was a pep in his step. A swing to his swagger.

Then as Mark Harper (Con, Forest of Dean) pushed the PM to provide the economic impact of his restrictions…zoiks!

The PM was rendered mute. Soundless. Shtum. Silencio. Up on the Commons screens, those bulbous lips continued to move but nothing came out. His eyes bulged awkwardly. It was like looking at a goldfish bumping up against the glass in its bowl.

What had happened? Had Dilyn the dog chomped through one of the cables? Had Carrie pulled the plug before Bozzie said something she didn’t approve of? Speaker Sir Lindsay Hoyle’s limbs windmilled with panic. He hates all this technology stuff. Gets him in such a flap. 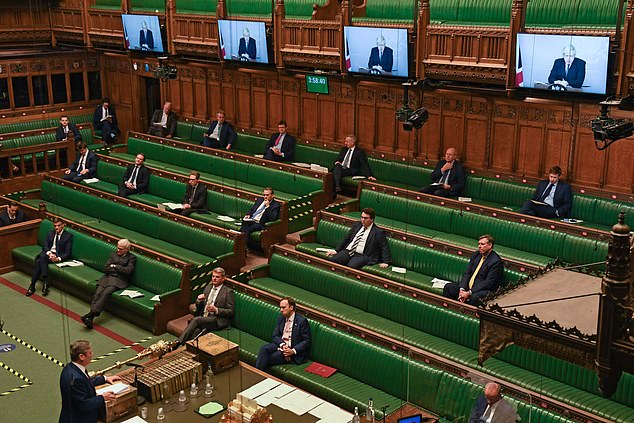 ‘The problem’s your end, Prime Minister,’ he hollered. ‘Have you pushed the mute button?’

Total silence. Boris, you suspect, no more knows where the mute button is on a computer than he does the location of the Downing Street stopcock. Around the chamber, hilarity ensued. Both sides of the House chuckled away merrily at the PM’s misfortune.

Personally, I thought it mildly disturbing that Downing Street computer nerds couldn’t get a basic communication link to work. Dread to think what would happen if it were Vladimir Putin granting the PM an audience.

Eventually, Sir Lindsay lost patience and asked whether Health Secretary Matthew Hancock might wish to speak on the PM’s behalf.

Further tittering. Asking Mr Hancock to take charge is like offering a roly-poly guest the last sponge finger over tea. He doesn’t need asking twice. Up he shot to the despatch box, twisting, twirling, bouncing on his toes. Gosh, he looked excited. Reminded me of the class swot who’s been asked to take temporary charge while teacher pops out for a crafty fag. 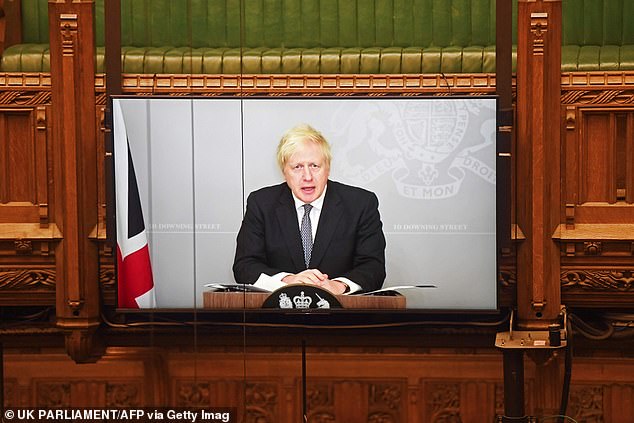 Then as Mark Harper (Con, Forest of Dean) pushed the PM to provide the economic impact of his restrictions…zoiks! The PM was rendered mute. Soundless. Shtum. Silencio

Was Hancock effectively acting Prime Minister? He would not have needed much talking round to this view.

Perhaps it was because Hancock was now at the despatch box, but it was noticeable from the exchanges that followed just how irritated Tory MPs were about this second lockdown. Damian Green (Con, Ashford) warned the more the Government pressed stupid rules on people, the less inclined they would be to obey the sensible ones. He clearly thought lockdown had been a waste of time.

There was an eccentric intervention from Sir Edward Leigh (Con, Gainsborough) who was cross that his two morning rituals – swimming in the Serpentine and attending Mass – had been taken away. Meanwhile, unseemly jostling began among MPs to stop their constituencies getting the harshest restrictions.

Julian Sturdy (Con, York Outer) said it would be ‘unfair’ if York was placed in Tier Three. Unfair? Not sure anyone will consider it fair if they end up being placed in the highest tier. 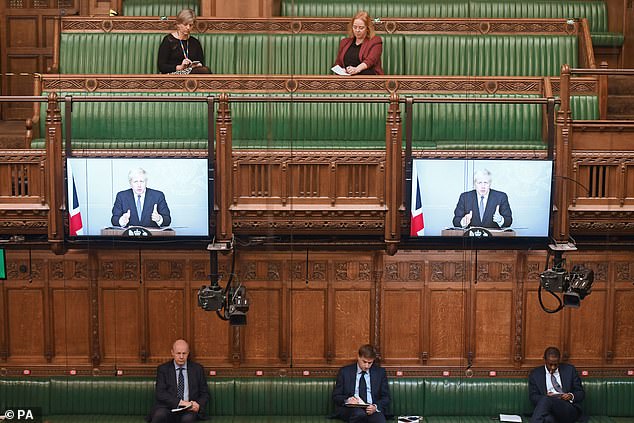 Up on the Commons screens, those bulbous lips continued to move but nothing came out. His eyes bulged awkwardly. It was like looking at a goldfish bumping up against the glass in its bowl

Hancock stayed well clear of this lobbying. He was happy for Boris to take the flak when he announces who gets what tier on Thursday.

Eventually, we got the Prime Minister back – albeit from a different location inside No10. He insisted the glitch had been the fault of the Commons. He seemed miffed to have missed so much of this important session. Quite possibly, a few choice words with the Commons authorities had been exchanged. Thankfully, there were no technical hitches at his evening Downing Street press conference.

Boris was still in cautious mode, particularly over Christmas. Yes, tis the season to be jolly but also to be ‘jolly careful’, he said. It was clear, however, that the announcement on the effectiveness of the Oxford AstraZeneca vaccine earlier had excited him. He insisted the ‘end goal’ was now in sight.

If all goes to plan, the PM said he hoped to get ‘the vast majority’ of vulnerable people vaccinated by Easter. Logistically, it would be hard work getting ‘shots in the arms where they’re needed’. After his earlier technical meltdown, a few shots in the arms are certainly needed in the Commons IT department.