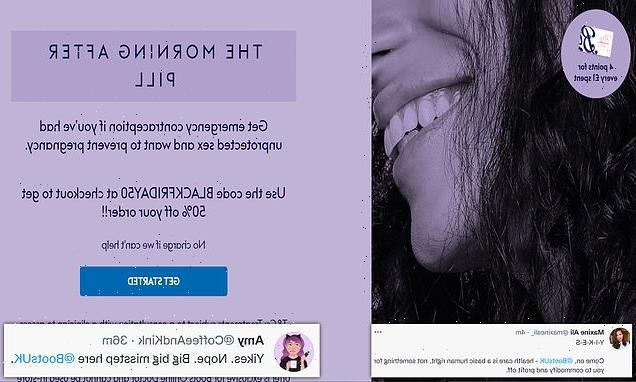 Boots Pharmacy has been slammed for turning the morning after pill into a ‘commodity to profit off after reducing the cost of it by 50 per cent in a Black Friday sale.

The UK retailer’s website has an advert telling customer that need emergency contraception they can save up to £28.25 by entering a code a check out.

The sale is company-wide across dozens of ranges, but customers have slammed the chemist for being ‘totally tone deaf’ ‘dystopian’ and ‘making UK healthcare seem American’.

Taking to Twitter, one customer wrote: ‘if you thought this year couldn’t get any more dystopian, I’ve got news for you.’

Boots Pharmacy has been slammed for turning the morning after pill into a ‘commodity to profit off after reducing the cost of it by 50 per cent in a Black Friday sale.

Boots offer a range of emergency contraceptives – which has to be prescribed by a pharmacist in person or online. They cost between £15.99 and £56.40, all of them more than the standard prescription cost in England of £9.35 per item.

The pills can be ordered and paid for through their online retailer.

Most pharmacies charge for the morning after pill – but those who need it can get it for free from some GP surgeries, sexual health clinics and walk-in centres – although it can be difficult to get an appointment.

The Boots offer runs from 26th November until 30th November 2021,  their advert reads: ‘Get emergency contraception if you’ve had unprotected sex and want to prevent pregnancy.

‘Use the code BLACKFRIDAY50 at checkout to get 50% off your order!!’

After screenshots of the image were circulated online, hundreds of people slammed it – with one person writing: ‘What hellscape is this? 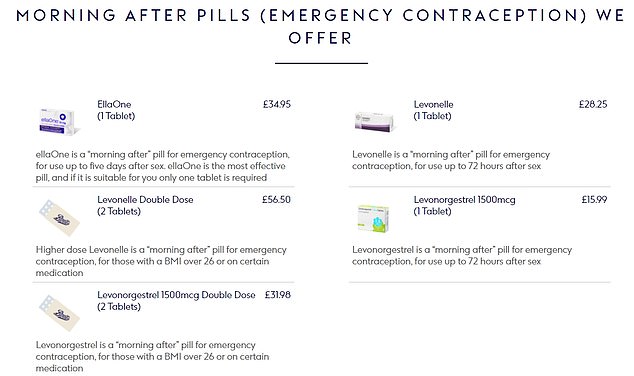 Boots offer a range of emergency contraceptives – which has to be prescribed by a pharmacist – which cost between £15.99 and £56.40, all of them more than the standard prescription cost in England of £9.35 per item.

Another added: ‘Oh, so you can afford to sell the morning after pill for less than you do?’

‘Come on, @BootsUK – health care is a basic human right, not something for you to commodify and profit off,’ said a third.

‘What fresh hell is this,’ added a fourth.

‘The issue is that even with a code the price is disproportionate. The morning after pill belongs on the shelf, for no more than £5,’ another wrote.

More said that it was ‘speechless’ and ‘vile’ while one said it was ‘truly awful and tone deaf.’

After screenshots of the image were circulated online, hundreds of people slammed it – with one person writing: ‘What hellscape is this?

Others slammed it for being an American-style advert, comparing it to campaigns for pharmaceuticals in the US.

‘We’re well on our way to seeing adverts for ramipril and metformin just like the US,’ said one.

What is the morning after pill and how dies it work?

The morning-after pill prevents or delays ovulation after a woman has had sex, meaning an egg is not released or fertilised to make a baby.

In the UK morning-after pills can be bought by anyone over 16.

It is usually free in GP surgeries and NHS family planning clinics, but many women go to a high-street chemist as they are unable to get an appointment in time.

The NHS offers two pills, which cannot be taken by asthma sufferers.

Levonelle contains a powerful synthetic hormone that blocks egg production or cuts the odds of it implanting in the womb. EllaOne is a chemical that affects the processing of progesterone.

Side effects can include sickness, dizziness, abdominal and back pain, diarrhoea, extreme tiredness and in rare cases, if the pill fails, ectopic pregnancy – which can be fatal for both mother and child.

‘Welp, we’re the US,’ commented another.

A spokesperson at Boots told FEMAIL ‘This is a promotion running on our Online Doctor service. The offer is 50% off all men’s and women’s healthcare services.’

In 2017, Boots said it was ‘truly sorry’ for refusing to cut the price of the morning-after pill in case it ‘incentivises inappropriate use’.

The row came after the British Pregnancy Advisory Service (BPAS) had urged chemists to cut the cost amid claims that British women are forced to pay up to five times more than those in Europe for the contraceptive.

While the morning after pill can cost as little as £3 online, it costs around £30 in most UK Chemists – significantly more than in the rest of Europe.

Clare Murphy, director of external affairs for BPAS previously said that it’s a ‘very cheap product to produce’ with British women paying ‘massively over the odds for it’.

‘One of the justifications for the continued high prices is there is this prerequisite for a consultation [with a pharmacist]. Women don’t need to have that interaction.

‘Elsewhere – in the US, Canada, other places in Europe – this is a product that is available on the shelf to buy without a consultation and that is what we would like to see here.’

Earlier this year,  drug regulators approved two brands of the contraceptive pill to be made available without written authorisation – but there are no plans for the same for emergency contraception.