Iran has a serious problem with coronavirus: Walid Phares

TEHRAN, Iran — Iran will recognize doctors and nurses who die combating the new coronavirus as “martyrs” like slain soldiers, the country's supreme leader announced Tuesday as the outbreak killed 54 more people and pushed the nation's death toll to 291.

The decision by Supreme Leader Ayatollah Ali Khamenei comes amid a propaganda campaign already trying to link the fight against the virus to Iran's long, bloody 1980s war with Iraq. The rising casualty figures each day in Iran suggest the fight against the new coronavirus is far from over, even as more people die from drinking methanol in the false belief it kills the virus.

Across the Mideast, over 8,600 people have contracted the virus and the COVID-19 illness it causes. The majority come from hard-hit Iran, which has one of the world's worst death tolls outside of China, the epicenter of the outbreak.

For most people, the new coronavirus causes only mild or moderate symptoms, such as fever and cough. For some, especially older adults and people with existing health problems, it can cause more severe illness, including pneumonia.

The vast majority of people recover from the new virus. According to the World Health Organization, people with mild illness recover in about two weeks, while those with more severe illness may take three to six weeks to recover. In mainland China, more than 80,000 people have been diagnosed and over 58,000 have so far recovered.

On Tuesday, Iranian Health Ministry spokesman Kianoush Jahanpour offered new casualty figures for the virus, which represented an 18% increase in deaths from the day before and 12% more confirmed cases.

Jahanpour warned figures in Iran likely will continue to rise before the Persian New Year, Nowruz, on March 20. He urged people to limit their travel, which already has been difficult for police manning checkpoints on roads between major cities. Iran has yet to take widespread quarantine decisions like China and Italy.

Khamenei meanwhile announced that those who die medically combating the virus will be considered martyrs in the Islamic Republic. The families of martyrs, typically from the security services and armed forces, receive payments and benefits from the state. It also bestows a sense of religious importance on those fighting the virus in the Shiite theocracy, which experts fear may be under reporting the total number of cases.

Khamenei separately announced he would not be giving his annual Nowruz speech in the holy Shiite city of Mashhad.

A rumor circulating in Iran that alcohol can treat coronavirus has so far led to 37 deaths and sent 270 people to the hospital after being poisoned by bootleg alcohol, the state-run IRNA news agency said Tuesday.

Seven bootleggers have been identified and arrested, said Ali Beiranvand, the deputy prosecutor in Ahvaz.

Meanwhile on Tuesday, Lebanon had its first known coronavirus death, a Health Ministry official said. The official said the 56-year-old man had recently returned from Egypt. The official spoke on condition of anonymity because he was not authorized to give official statements. 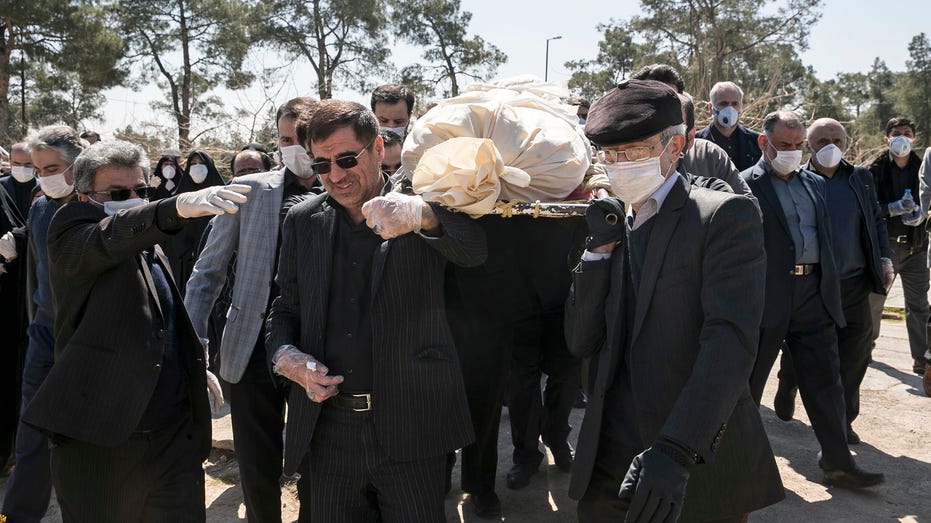 Mourners wearing face masks and gloves carry the body of former politburo official in the Revolutionary Guard Farzad Tazari, who died Monday after being infected with the new coronavirus, at the Behesht-e-Zahra cemetery just outside Tehran, Iran, Tue

Lebanese Minister of Culture Abbas Murtada separately ordered all museums closed until further notice because of coronavirus, according to state-run national news agency. Lebanon, like other Mideast nations, has closed schools and universities over the virus.

There were 59 confirmed cases as of Monday in Egypt, the Arab world's most populous country, including one fatality, a German tourist. Outside Iran, only Iraq, Egypt and now Lebanon have recorded deaths from the virus in the Mideast.

Hardest hit in Egypt was the ancient city of Luxor, which a WHO representative described Tuesday as being under strict government scrutiny. Dr. Jean Yaacoub Jabbour told The Associated Press that his agency is working with the Egyptian government to trace the cases and those who interacted with them, including the cases found aboard a Nile cruise ship.

“They have widened their investigation fully in order to reach and to trace all contacts … , and also they are taking measures on the spot, for example this boat being in isolation, a self-isolation facility, taking care of all people inside,” he said.

Egypt's government has announced a temporary ban on large public gatherings and all events involving people’s movement between cities. Egypt’s soccer association said Tuesday all soccer games in the country would be played in empty stadiums until further notice.

Saudi Arabia closed off air and sea travel to 14 countries affected by the new virus Monday, while Israel ordered two weeks of home quarantine for anyone arriving from overseas. The outbreak in Israel has been largely contained, but it has begun to gain pace in recent days, with a total of 58 cases diagnosed as of Tuesday. There are 26 confirmed cases in the Palestinian Territories.

Jordan announced Tuesday it was banning travel to and from Syria and Lebanon, closing its land crossings with Israel and Iraq and shutting its sea crossings with Egypt. It plans to ban travelers from France, Spain and Germany from entering Jordan and will prevent its citizens from traveling to those countries beginning Monday.