Maria Lewis is a best-selling author, screenwriter and journalist. Her fifth fantasy novel, The Wailing Woman, is published by Hachette.

Frankenstein
Mary Shelley
Proving that anything men can do, teenage girls can do better and first. Mary Shelley is an icon of the genre she created with her first novel. It’s easy to forget how good the source material is – given the hundreds of adaptations over the past 200 years – but it’s a classic for a reason. Genuinely terrifying, poignant, and entertaining: it was the first example I saw of the enduring power speculative fiction can have. 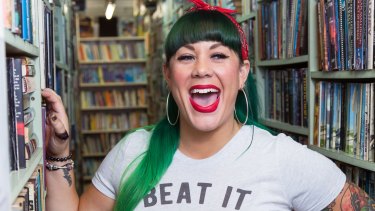 The Rap Year Book
Shea Serrano
Shea Serrano is my favourite writer. Given how much non-fiction I produce, I tend to avoid it recreationally and dive into fantasy or crime novels instead. But The Rap Year Book redefined how pop culture can be written about. Just because you’re penning an entire chapter about the importance of the Wu-Tang Clan’s business model, that doesn’t mean the writing can’t be a) brilliant; b) hilarious; and c) insightful all at the same time. Serrano has this unrivalled ability to celebrate specific pop-cultural obsessions on a micro and macro scale.

The She-Hulk Diaries
Marta Acosta
Long overlooked by male comic-book readers as just "the Hulk with tits", this book empowered the classic She-Hulk character with the female lens and made her the centre of the narrative. Feminist, funny, sexy, and action-packed, more recent female-driven comic-book properties – Captain Marvel, Jessica Jones, even Wonder Woman – owe a lot to this underrated novel. It also contains an absolute flex of a line: "Male is not the default gender for superhero."

I started out as a police reporter and my grandfather was a New Zealand detective with his own book – Cover Ups and Cop Outs – so crime has always been something that fascinated me. Although The Silence of the Lambs is better known, Red Dragon had a staying power in my consciousness. Maybe partially because of the central, creepy villain – Francis Dolarhyde, aka "The Tooth Fairy" – but probably more likely because it so cleverly establishes Harris’ unique world of psychopaths and the brilliant minds in pursuit of them. The pinnacle of crime fiction for me.