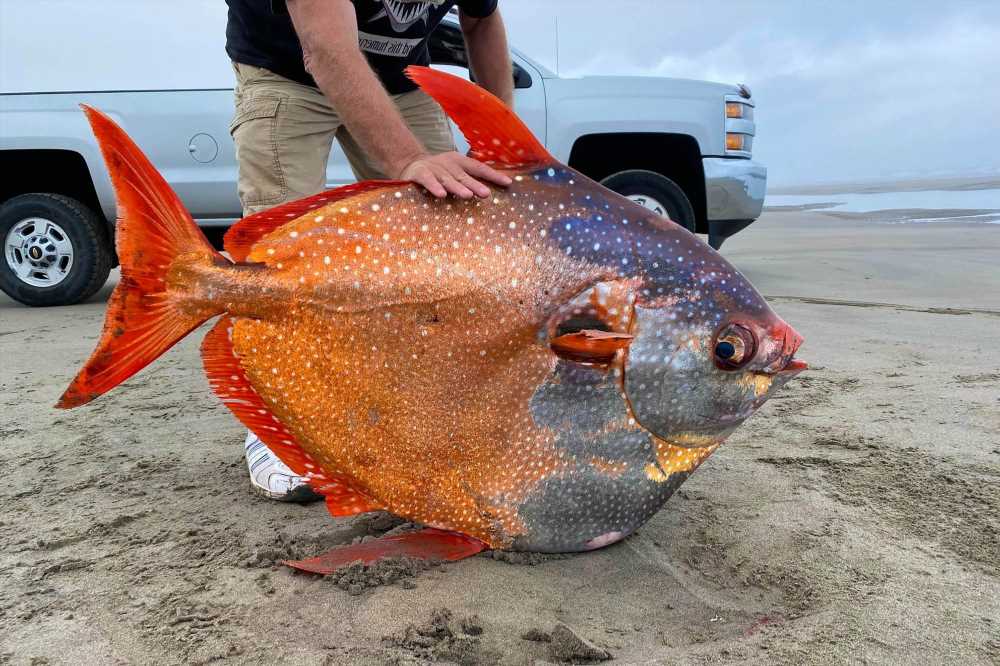 He must’ve heard about the heatwave.

The record-breaking hot temps aren’t the only tropical-seeming phenomenon to hit the Beaver State of late. Oregon beachcombers were stunned after discovering a wildly colorful 100-pound exotic fish on the shore in the state’s northwestern region.

“A large fish, rare to the Oregon Coast, was found on Sunset Beach this morning,” wrote the Seaside Aquarium in a now-viral Facebook post, along with several photos of the 3-and-a-half-foot long fin-terloper that they’d received at 8 a.m. on June 14.

Fortunately, aquarium staffers were able to quickly respond and recover the dead specimen before the birds got to it, WYFF 4 reported.

They then transported the unusual find to the aquarium where excited “folks were encouraged to come and take a look at this beautiful yet odd-looking fish,” per the venue’s Facebook post.

The institution has since identified the flamboyant flotsam as an Opah or moonfish, a pelagic species of fish that inhabits tropical and temperate waters, where it feeds on krill and squid, according to the National Oceanic and Atmospheric Administration (NOAA). Seaside Aquarium experts said this rotund ocean denizen can grow to over 6 feet and weigh a whopping 600 pounds.

Perhaps the Opah’s most unique attribute is its diverse color scheme, which transitions sharply from silver-gray at the head to “rose red with white spots” toward the belly, something like a marine-dwelling Neapolitan ice cream. Meanwhile, “their fins and mouth are red, and their large eyes are encircled with gold,” according to NOAA.

“They’re pretty cool fish, and we don’t normally see them on the shore,” Keith Chandler, the general manager of Seaside Aquarium, told CNN of the “uncommon find.”

However, while they don’t normally range this far north, Opahs aren’t total strangers to the Pacific Northwest. In 2009, a 97-pound specimen was caught just 37 miles from the mouth of the Columbia River, per the Facebook Post.

Go figure: these fat fish are prized in culinary circles due to their unique flavor profile, which is said to evoke a combination of swordfish and tuna.

Hoping to use the Opah as an educational tool, the aquarium is storing the colorful creature in a large freezer until the school year starts, whereupon one lucky school will get to help dissect it.