Prime Minister Scott Morrison has conceded he will have to change his approach to governing if he wins the election after acknowledging he can be “a bit of a bulldozer”.

At a campaign event in the marginal Victorian seat of Chisholm, Morrison was asked whether part of his problem with voters was that he kept telling people what they should know rather than listening to them. 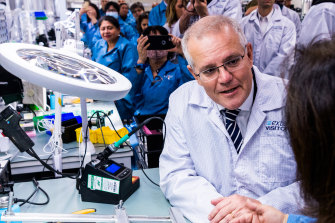 Prime Minister Scott Morrison has admitted he can be a “bit of a bulldozer”.Credit:James Brickwood

“It’s very important to be listening to Australians and I have done that all across my political career,” the Prime Minister said on Friday morning.

“Over the last three years, and particularly the last two, what Australians have needed from me going through this pandemic has been strength and resilience. Now, I admit that hasn’t enabled Australians to see a lot of other gears in the way I work.

“And I know Australians know that I can be a bit of a bulldozer when it comes to issues and I suspect you guys know that too. But, you know, over the last few years that’s been pretty important, to ensure we’ve been able to get through some of the most important things that we’ve had to do, and land some really big security agreements with the United States and the United Kingdom.”

Morrison said while he had to be determined to see those agreements through, he flagged a different approach if he wins next Saturday’s election.

“As we go into this next period on the other side of this election, I know there are things that are going to have to change with the way I do things,” he said.

At the same time, Morrison did not hold back on his opponent, accusing Opposition Leader Anthony Albanese of being a “loose unit” on the economy by declaring Australians “can’t afford to have someone who’s loose in the Lodge.”

The prime minister’s comments came after Coalition spokeswoman Anne Ruston earlier in the morning shifted the government’s rhetoric on wages by appearing to land in favour of a pay rise for workers on the minimum national rate.

“We absolutely seek for Australia’s lowest paid workers to continue to be able to have increases in their wages,” Ruston told ABC radio this morning while being questioned about the Coalition’s neutrality on the annual minimum wage review.

The debate over wages has become one of the key issues of the election campaign after Albanese said this week he “absolutely” backed a rise in the minimum wage to meet the 5.1 per cent headline inflation rate.

His stance triggered attacks from the Coalition, with Morrison calling Albanese a “loose unit on the economy” whose specific stance would trigger an inflationary chain reaction and “precondition” the economy to expect such a rise.

“Anthony Albanese says that he wants wages to go up by 5.1 per cent, and he thinks that Australians don’t know what the impact of that would be on their interest rates, on unemployment, or on inflation and the cost of living,” Morrison told a press conference on Wednesday.

However, Ruston on Friday morning retreated from the Prime Minister’s criticism of Albanese’s nominated rate.

“The government has been very clear in its condemnation of the comments by Mr Albanese, not because of the figure that he put out there specifically, but the fact that he’s just chosen to put a figure out there, you know, without bothering to consult, take advice,” Ruston said.