An amiable, down-to-earth priest, he was the first Italian bishop infected by the coronavirus to die. 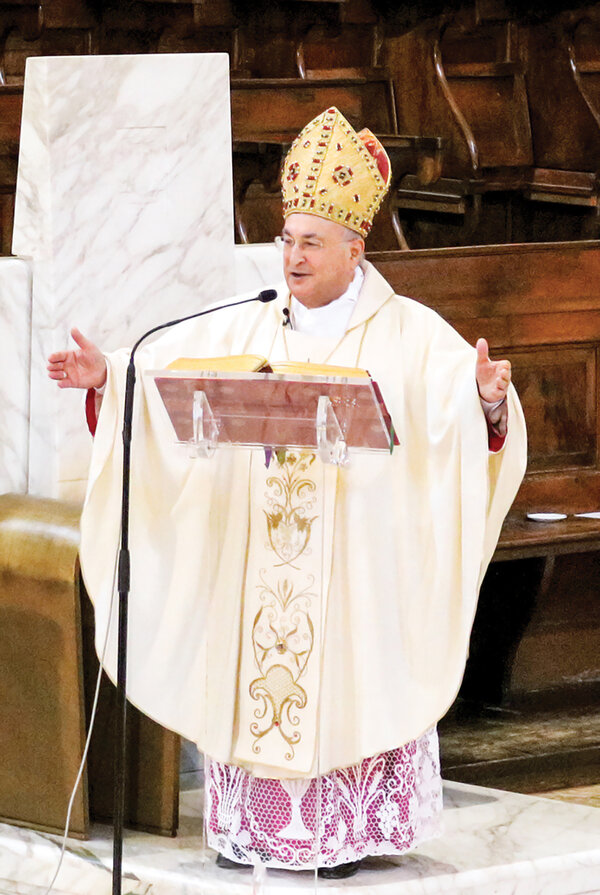 Giovanni D’Alise had been the bishop of the southern city of Caserta for only two months in July 2014 when Pope Francis planned a visit there to see a friend, an evangelical pastor. The date of the visit happened to be the feast day of the city’s patron saint.

“I called the bishop,” the pope later told local priests in an address, “and he said ‘Ah, the very day of our patron saint!’” Francis took the hint that newspapers would jump on the coincidence and say, “On the patron saint’s feast in Caserta the pope went to the Protestants.”

With the help of Bishop D’Alise, the pope rescheduled his visit to the pastor, Giovanni Traettino, and instead celebrated a Mass in honor of the saint, St. Anne, in the square in front of the city’s Versailles-scale palace.

Along with his deep theological credentials and ability to project the faith, Bishop D’Alise had a talent for easing tensions and building relationships.

The bishop died on Oct. 4 in Caserta, a city about 20 miles north of Naples. He was 72 and the first Italian prelate to have died after contracting the coronavirus. While hospitalized with the virus, he suffered a heart attack, his brother Emilio said.

Bishop D’Alise, an amiable, down-to-earth priest, opened his door to the poor and fought to protect the environment in his scarred territory around Naples, known as the “land of fire” because of the many fires of toxic garbage in the area.

He was born on Jan. 14, 1948, in Naples. His parents, Teresa Savino and Giuseppe D’Alise, farmed the land in San Felice a Cancello, a small town near Naples, growing tomatoes, tobacco, corn and beans.

He started playing with holy cards featuring the Virgin Mary and saints when he was a child. His family cut expenses so they could afford to send Giannino, as they called him, to a seminary middle school in Acerra, a nearby town, when he was 12. His mother urged his four siblings, who stayed at the farm, to always make an effort to keep him from feeling alone.

He attended the Pontifical Theological Faculty of Southern Italy in Naples and was ordained in 1972. His brother Emilio and his wife followed his mother’s wish, often cooking the priest his preferred dish, fried eggplant with tomato sauce, and keeping him supplied with his favorite body wash, Dove Precious Silk.

Along with his brother, Bishop D’Alise is survived by a sister, Pasqualina D’Alise.

As a priest, Bishop D’Alise became close to the Focolare movement, an influential Catholic lay organization. He served as a parish priest near his hometown, but he was also given tasks in the diocese of Acerra, such as overseeing religious instruction and the diocesan news bulletin. He was consecrated a bishop in 2004 and assigned the diocese of Ariano Irpino-Lacedonia in Campania.

In 2014, Pope Francis appointed him bishop of Caserta. Still, he welcomed dozens of visitors a week, especially those in economic distress.

“Nobody ever left his office empty-handed,” his secretary, Michele Rossi, said, “even materially.”

The bishop organized meetings and events to raise awareness of the huge environmental and health impact of illegal dumping in his area. During the pandemic, he spoke out against mobsters who took advantage of the difficult economic situation by preying on people in financial trouble, and he called the firing of workers “inhumane.”

Bishop D’Alise’s projection of faith made an impression on many, from his parishioners to the young seminarians he helped form and even a former prime minister, Ciriaco De Mita.

When Mr. De Mita met the bishop’s brother at a conference, he immediately recognized the surname. “Your brother is a man who really believes in it,” Emilio D’Alise recalled the politician telling him. “I have never met anyone like that.”

While the love life of Prince Charles strikes many as unmistakably chaotic, it appears that a missing detail may make...