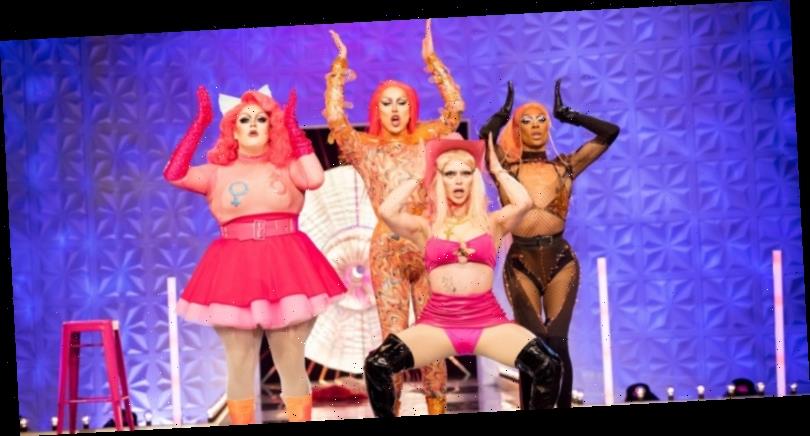 If the lyrics “Bing bang bong, ding dang dong” have been uncontrollably ricocheting between the walls of your head since Thursday night, you’re not alone. “UK Hun?” the incessantly catch ditty with the offending lyrics, is now the number four song in all of the United Kingdom, according to The Official Big Top 40. It was the highest debut on the chart of the week, beating out new offerings from Dua Lipa, Taylor Swift, and Pink in the process. It’s a surprising feat considering the credited artist, the United Kingdolls, were assembled from four contestants on the most recent episode of RuPaul’s Drag Race UK to take on that week’s challenge of performing a Eurovision-style pop ditty.

The song was an instant hit, climbing to #1 on iTunes’ UK charts where it has stayed on and off ever since (as of publication time, it’s still in the top spot). There’s now a campaign to push it all the way to number one of the charts as well.

The development isn’t completely unprecedented. “Break Up (Bye Bye)”, a song performed by a group of contestants calling themselves The Frock Destroyers reached number 35 on the charts in 2019 after being featured on the show’s first UK season. The British, in general, tend to have more of a habit of sending novelty songs up the charts than we do over here in the States. (Do you vaguely remember tracks like “Axel F” by Crazy Frog, or “The Ketchup Song?” It’s also worth noting that songs credited to Bart Simpson, Bob the Builder, and the Teletubbies have been number one hits in England).

Still, “UK Hun?” has taken on a new dimension. Not only can’t people get it out of their head, but the fact they can’t has become a meme of its own. Even model and actress Hari Nef and Bridgerton star Nicola Coughlan have been affected.

The song’s onomatopoeic majesty isn’t incidental, though it probably requires some kind of explanation for Americans. The challenge this week was to spoof the type of song entered into the Eurovision Song Contest, the famed music competition where participants from countries all across Europe (and beyond) submitted a song they’d made. Because countries represented all have varied native languages, songs often employ simple, catchy nonsense lyrics that transcend language. “Boom Boom,” “Ding Dong,” “Haba Haba,” and “Da Da Dem,” are all the names of actual Eurovision entries, and those are all from 2011 alone. Though relying too much on nonsense lyrics can be seen as a bit of a backlash-inducing cheat in the actual competition, as a spoof, “UK Hun” is free to lean into the biggest, broadest, catchiest nonsense possible, which, apparently is just “Bing bang bong! Sing sang song!” over and over and over again.

It’s also interesting that the United Kingdolls’ version is actually one of two. Unlike the American original, the UK edition of Drag Race has established a tradition where the contestants are split into two teams and tasked with writing verses for a song with the same backing track and chorus. It makes for an interesting examination of why one version of a given song tends to pop, while another can fall flat.

Team makeup and chemistry seems to have something to do with it. The Kingdolls version benefits from its members’ varied accents (Scottish, Welsh, Cockney, and more standard London accents are all represented, adding something of a pan-UK pride element).

Though, like previous Drag Race hit “Break Up (Bye Bye)” small shifts in textural production choices make a big difference. In the winning version of “Breakup,” contestant Divina De Campo’s repeated whistle tone notes layered into the chorus set it apart. In the hit version of “UK Hun?” contestant Bimini Bon Boulash’s heavily accented and highly enthusiastic vocals ride high in the mix of the chorus, giving the song an extra boost of energy needed to fully embed itself into your brain.

Yes, it’s a silly little novelty song meant for a single episode of Drag Race, but there’s real talent behind it. British hitmaker MNEK was on hand to coach the contestants on vocals, while Leland, who has produced major hits for Troye Sivan, Ava Max, and Selena Gomez, co-wrote and co-produced the track.

The song’s journey isn’t over. It very possibly may find itself on some minor Billboard chart or another in America (as “Break Up” previously did on the Hot Dance/Electronic Songs chart), and Britain’s other major singles chart, operated by the Official Chart Company, has yet to update this week. There’s also, of course, now a real movement to enlist The Kingdolls to represent the UK in the actual Eurovision contest.