“Why do you love Aussie Rules so much?” is a question I’m often asked. Living in a rugby league city, people are intrigued by my adoration of the game, or more specifically, the Sydney Swans. 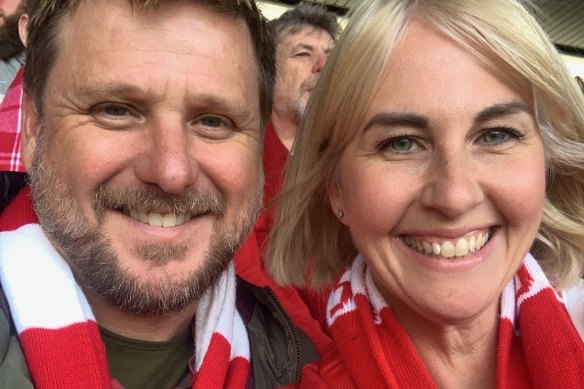 Perhaps as a middle-aged mother of two, I don’t fit the footy devotee image people have in their heads, says Genevieve Quigley, pictured here with her husband.

The assumptions are that I attend games with my husband because he’s a supporter (I take him) or I’m taking my kids (they’re both Rabbitohs fans) or I’m originally from Melbourne (nope). Perhaps as a middle-aged mother of two, I don’t fit the footy devotee image people have in their heads (I can assure you there are plenty of us).

The answer is, although I was born in Canberra, both my parents previously lived in Melbourne and my father brought his infectious passion for the game with him when they moved to the nation’s capital. One of my earliest childhood memories is watching my dad wearing a yellow and black jersey, cheering at the television set in 1980 when his beloved Richmond Tigers won the premiership flag.

I moved to Sydney in my early 20s and watching the footy fell away to working, partying and making mates. It wasn’t until I’d moved overseas, then returned to Sydney to have my first baby in 2005, that my love of AFL was sparked again. With working, partying and making mates replaced with breastfeeding, settling and nappy changing, a weekly Swans game on the telly broke the humdrum of winter with a newborn.

I’d never felt more “proudly Sydney” and grateful to have been adopted by a city that led me to a career, husband, baby and now a premiership team.

In tandem with each milestone my baby reached that year, the Swans inched closer to the grand final. By September, the town was painted red and white and they were off to the big dance at the MCG. My husband, eight-month-old daughter and I settled on the couch in our tiny apartment glued to the screen. When Leo Barry took his now-famous mark just before the siren with the score at Sydney (58) to West Coast (54), we leapt up from the couch. In my mind’s eye, I can still see our daughter’s big, gummy smile as we bounced her up and down in our arms, squealing with delight. 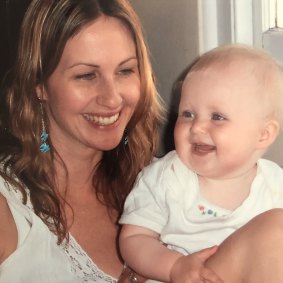 The author with her daughter as a baby.

They’d bloody done it! For the first time in 72 years and the first time since moving from South Melbourne to Sydney. I’d never felt more “proudly Sydney” and grateful to have been adopted by a city that led me to a career, husband, baby and now a premiership team. But amongst the jubilation, a part of me felt like a fraud. Did I really have the right to celebrate the win like a diehard fan?

Would I have been so invested if they’d been wooden spooners that year? There was no denying I was one of many Sydneysiders who had jumped on the bandwagon that glorious season. But 17 years later, whether the odds be great or be small, I’m still onboard. My second child was born two years after that drought-breaking win, and a year after the Eagles avenged their grand final loss by a one-point win in 2006. While deep in the trenches of life with a baby and toddler, grey winters continued to be lit up by the Bloods. In her book, This is Not a Book About Benedict Cumberbatch, author Tabitha Carvan writes about the joy of feeling passionate about something again after motherhood had caused her to lose touch with her own identity. For her, it was the star of the Sherlock series. For me, it was the Sydney Swans. They have been a constant tap into the “old me” throughout my years of child rearing.

I joked to my husband that more people had reached out to me on that day to wish me well than on my birthday.

In 2012, when my youngest turned five, and I felt I was coming out of the fog into a breezier stage of parenting, the Swans ended the season with yet another premiership win. The paradox of finding my own identity in supporting a team is that I know I’m only a small part of something much bigger.

But there’s a special magic that comes with being just one drop in the sea of red and white that flows into the SCG on a sunny Saturday afternoon. Being swept up in the cheers of the crowd, finding myself lifted out of my seat without thought, singing a club song I don’t recall learning the words to, and the electricity of storming the field the night Buddy kicked his 1000th goal, all feel like reaching that state of “flow” I’ve read about in psychology textbooks. Last Saturday I woke up with knots in my stomach knowing the Swans would be facing off against the Pies in the preliminary final. I joked to my husband that more people had reached out to me on that day to wish me well than on my birthday. In hindsight, it wasn’t a joke. 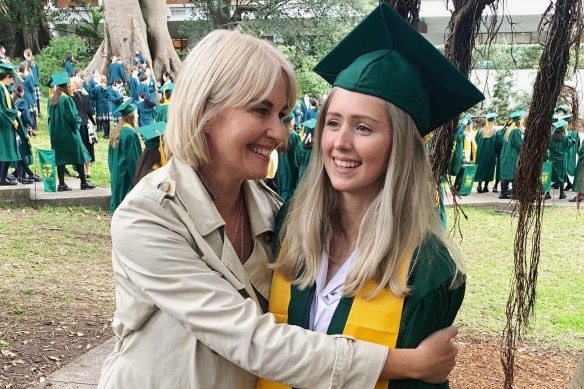 This week, that little baby I held in my arms while watching the 2005 grand final graduated from highschool, writes Quigley.

No words can describe the heart-stopping one-point victory, so I won’t even try. I left the stadium as though I was floating. Rather than hopping on the light rail to get home, I had to keep walking as my legs couldn’t keep still. Taking step after furious step was the only way to use up the energy pulsing through me.

This week, that little baby I held in my arms while watching the 2005 grand final graduated from highschool. This is a huge milestone in my parenting journey and I can’t deny that a win this weekend would feel like a perfect ending to this chapter. I’ll be in the stands of the MCG cheering the red and the white on Saturday. But win or lose, I’m just happy to be there for my team – as they have been for me.