The BBC’s former head of editorial policy has said it doesn’t ‘make any difference’ whether Princess Diana was happy with the way journalist Martin Bashir secured her explosive 1995 interview.

Richard Ayre, who was head of BBC editorial policy at the time, said the Princess was ‘pleased the programme went out’ and so questions surrounding how Mr Bashir had bagged the interview were irrelevant.

It’s been alleged that the reporter who delivered the scoop of the century won the trust of the Princess through his use of questionable methods including producing fake bank statements showing payments of thousands of pounds from newspapers to ‘traitors’ allegedly ‘spying’ on the Spencer family. 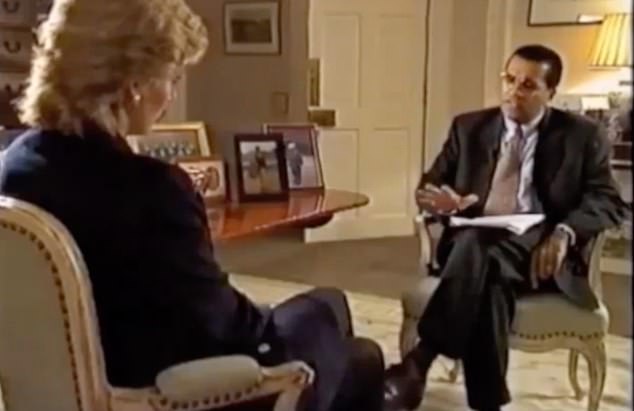 The BBC’s former head of editorial policy has said it doesn’t ‘make any difference’ whether Princess Diana was happy with the way journalist Martin Bashir secured her explosive 1995 interview, pictured

The BBC’s investigation at the time exonerated Bashir but declared that the graphic designer involved in making the phoney documents ‘will not work for the corporation again’.

Speaking in the second part of The Diana Interview: Revenge of A Princess, which airs tonight at 9pm, Mr Ayre, who was BBC Controller of Editorial Policy between 1993-1996, argues the Princess’s thoughts on Mr Bashir’s methods shouldn’t come into question.

He says: ‘But then if you, if you pursued this idea that he’d [Mr Bashir] forged that document, I mean, I don’t see how her being happy that it would make any difference one way or the other really. Of course, she was happy because she was pleased the programme went out.’

The two-part ITV documentary gives an inside look at Princess Diana’s 1995 interview with Martin Bashir that shocked the nation, in the process threatening the future of the monarchy and of the BBC.

Marking 25 years since Britain tuned in to watch Diana pour her heart out on national television, the two episodes hear from those who witnessed her fairytale romance with Prince Charles descend into rancour and ultimately divorce.

The documentary alleges the Princess of Wales received guidance from the interviewer in how to phrase her infidelity with James Hewitt. 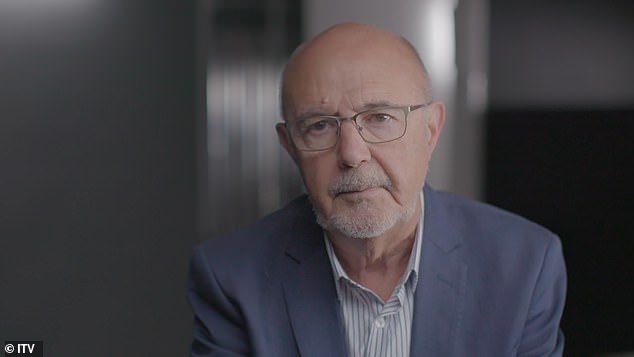 Speaking in the second part of The Diana Interview: Revenge of A Princess, which airs tonight at 9pm, Mr Ayre, pictured, who was BBC Controller of Editorial Policy between 1993-1996, argues the Princess’s thoughts on Mr Bashir’s methods shouldn’t come into question

ITV spoke to cameraman Tony Poole, who was in the room while the interview was conducted, reveals that filming had to be stopped to ensure Diana was happy with the answer she gave.

The documentary recalls the moment Diana famously said: ‘Yes, I adored him, yes, I was in love with him’, when speaking of James.

‘The question Diana had a problem answering was with regards to James Hewitt, when Martin asked her, ‘Was she unfaithful?’ And she didn’t quite know how to phrase her answer. We stopped recording and after some discussion, she was then happy with how she would answer…,’ says Tony.

Speaking of Bashir, he adds: ‘Yeah… The discussion between Martin and Mike the producer I think, and Diana herself, helped her phrase an appropriate answer.’

James Hewitt, who is an ex-Army captain and Gulf War veteran, had a five-year affair with Diana while she was married to Prince Charles. 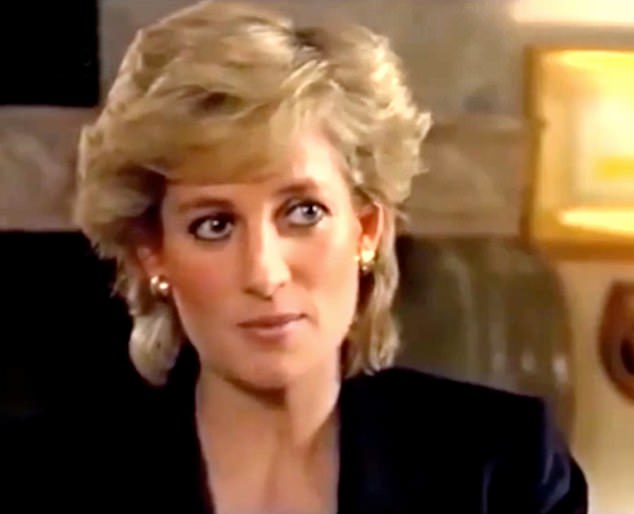 The corporation exonerated itself of any wrongdoing at an initial inquiry in 1996 – one year after the Panorama interview.

The 1996 probe focused on the use of fake bank statements to gain Diana’s trust. It was effectively ended by a handwritten letter from the princess, which supposedly said she was happy with Mr Bashir’s conduct. This letter has since been lost.

The BBC says it has now apologised for the fake bank statements Bashir admitted showing to Earl Spencer. It told the programme: ‘We will investigate the issues raised and..this will be independent. We will set out the terms of reference in due course…( and) do everything possible to get to the bottom of this.

‘Unfortunately, we are unable to discuss any of this with Martin Bashir, as he is seriously unwell.’

‘Investigations at the time focused on whether the Princess of Wales had been misled … The key … was the Princess’ own written assertion that she had not seen the mocked-up documents and they had played no part in her decision to take part.’

Today the BBC’s new director-general Tim Davie has promised to ‘get to the truth’ behind Princess Diana’s Panorama interview.

Mr Davie said: ‘The BBC is taking this very seriously and we want to get to the truth. We are in the process of commissioning a robust and independent investigation. The recent stories have highlighted some concerning issues. The BBC must hold ourselves to the gold standard of journalism.’

Last week, Diana’s brother Earl Spencer gave the Mail an extraordinary insight into Mr Bashir’s methods, using notes he kept of a meeting with him and Diana in September 1995.

Mr Bashir had reeled off a string of lies about people betraying her, the earl said. He dismissed Mr Bashir as a fantasist – but Diana stayed in touch with the journalist, leading to the historic Panorama interview two months later.

The earl chose to speak out, having learned just two weeks ago that there had been a cover-up at the BBC.

After years of rejecting demands for documents under the Freedom of Information Act, claiming they did not exist, the corporation suddenly stumbled across 67 pages following a request from a Channel 4 reporter.