Couple who bonded over their love of Back To The Future throw a £10,000 wedding reception based around the ’80s classic movie – complete with the original DeLorean time machine

A couple who celebrated their marriage with a £10,000 Back To The Future-themed party complete with the original DeLorean time machine have told how they fell in love after bonding over the movie trilogy.

Lynsey McConville, 38, from Stratford, East London, recalled how one of her first dates with her husband James, also 38, was at a Secret Cinema screening near their home of the 1980s classic.

And in April 2018, when software developer James proposed to Lynsey, in Shanghai, China, they threw a no-expense-spared ‘sci-fi-style’ wedding party at Heron’s Park Wedding Venue in Lydd, Kent, on September 28 – with the theme of Enchantment Under the Sea, the classic dance from the film.

Lynsey, who met James five years ago in a bar in Bow, East London, where she was enjoying a drink with friends, said: ‘I think it went down really well with the guests, everyone thought it was funny and loved the 80s music. It turned into a big knees up. 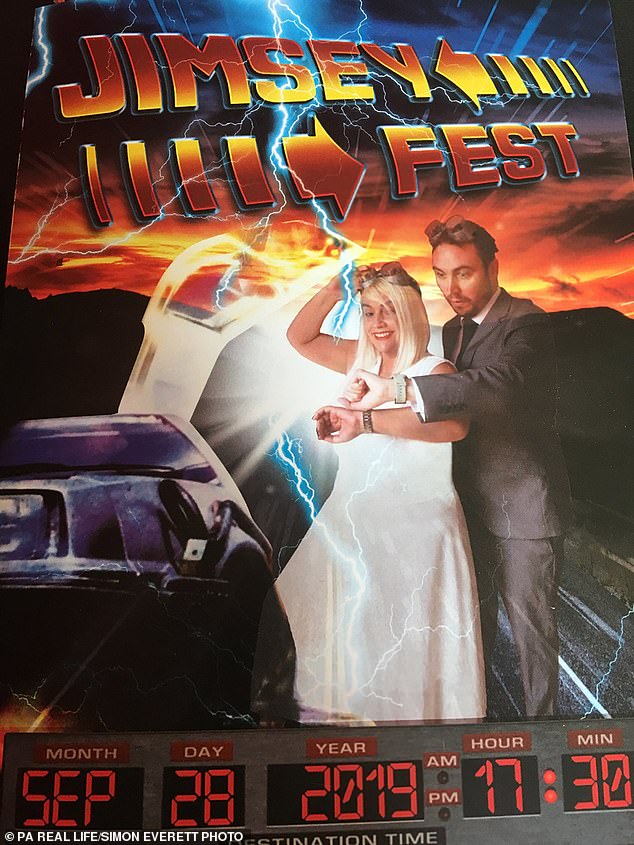 Lynsey McConville, 38, from London, and her husband James, also 38, decided to throw a Back To The Future party to celebrate their marriage 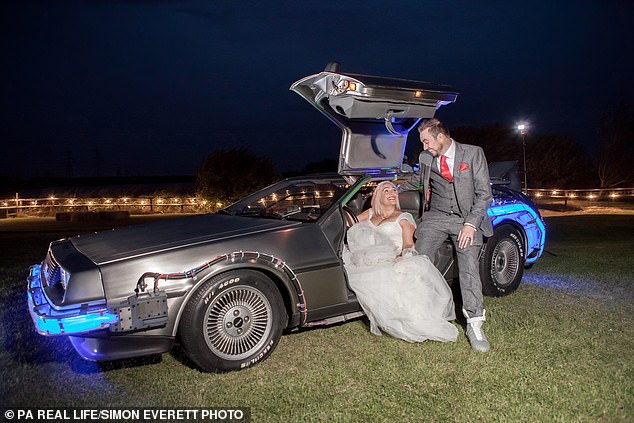 The couple spared no expense for the £10,000 lavish celebration and ensured they had the original DeLorean time machine seen in the film 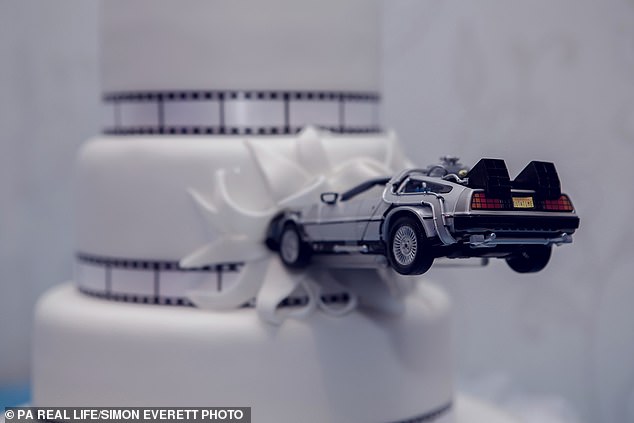 ‘Guests got to have photos in the original DeLorean, which had been signed by all the cast members. One of my friends in particular was very taken with it and kept asking the DeLorean ‘guardian’ what the buttons did.

‘It was such an amazing day.’

While their outfits remained traditional,  James wore a pair of Back to the Future light warrior sneakers, made famous by Marty, played by Michael J. Fox, in the the hit film.

The couple also ensured they were able to use the DeLorean, which in the movie is the brainchild of eccentric inventor Dr Emmett L. Brown, and asked the wedding band to play the soundtrack from the 1980s classic.

The couple had already tied the knot in front of just 35 close friends and family in an intimate ceremony on the Greek island of Santorini on September 21.

But their Back to the Future party a week later was their official wedding reception, attended by 90 guests, where they enjoyed their first dance to the Power of Love by Huey Lewis and the News, which Marty is seen skateboarding to school to in the movie. 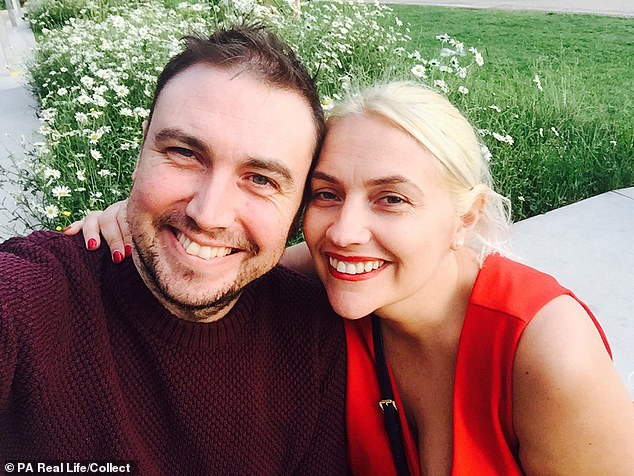 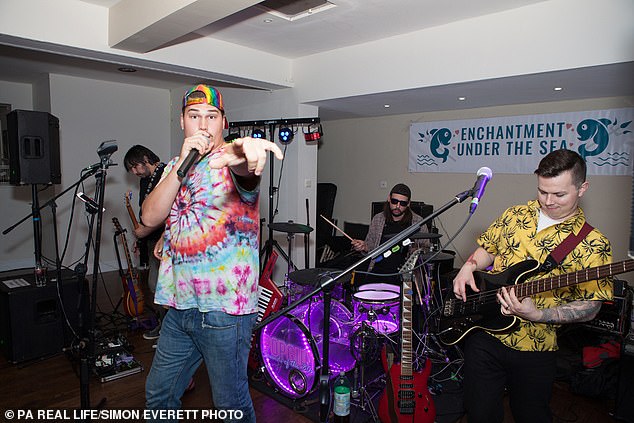 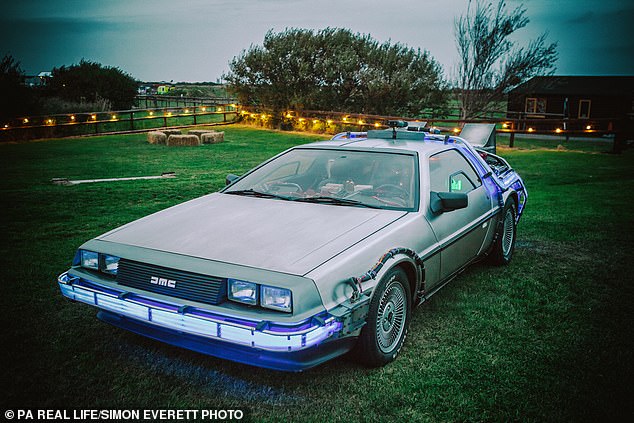 The original DeLorean in the 1980s sci-fi comedy is the brainchild of eccentric inventor Dr Emmett L. Brown 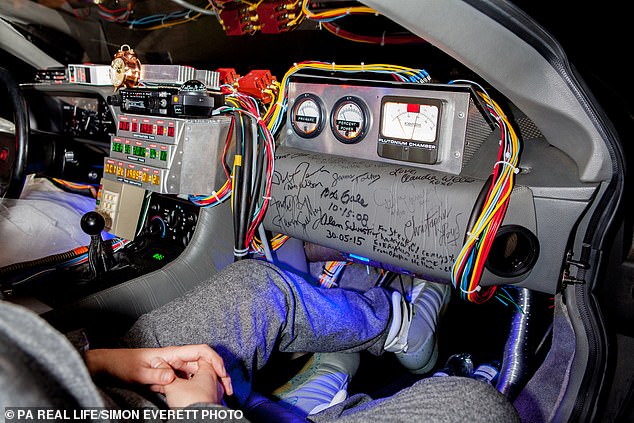 Lynsey, who first met James when she was visiting friends in London while living away in Dubai said: ‘We were both born in the 1980s and have fond memories of all the retro toys and the films, so the Back to the Future theme felt perfect for us.’

With their romance off and on to begin with, it was when she moved back to London six months later that things became serious.

Then, three and a half years later, in April 2018, James proposed at the top of the rooftop bar of the Ritz Carlton hotel, while they were on holiday in Shanghai, China.

Lynsey recalled: ‘He had wanted to do it on the Great Wall of China, but there were too many tourists around, so he opted for a rooftop bar with a view. He said, ‘Let’s go outside and take a selfie,’ then got down on one knee.

‘I said yes straight away. 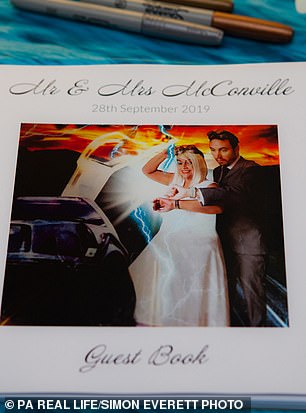 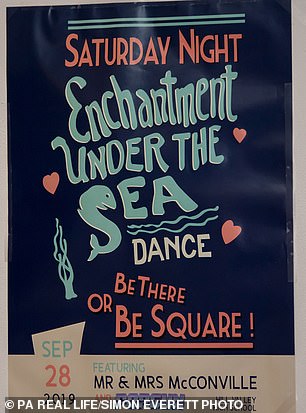 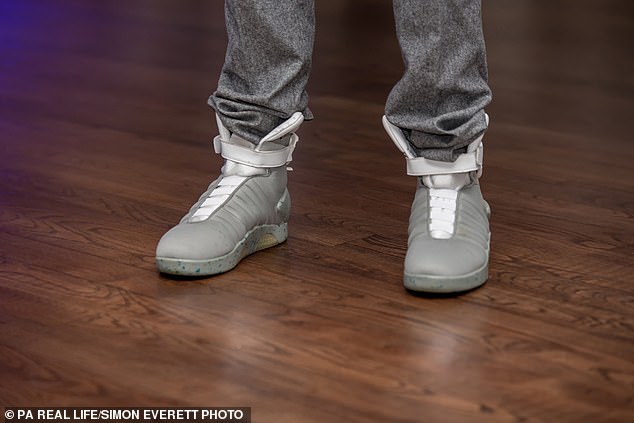 ‘When we started seeing each other properly, one of our first dates back in 2014 was to see Back to the Future, as part of the Secret Cinema experience.

‘James isn’t really into immersive theatre, but because he liked all of the films, I thought he would enjoy it.

‘It’s not just watching the film, there were actors walking around dressed as the characters. They had the high school lockers, the DeLorean and the hoverboards. We dressed up as eighties schoolkids with nerdy glasses.

‘I had seen the film when I was a kid and remembered the hoverboard and had seen it a couple of times since then, but James is the bigger fan.’

‘It was great fun. We actually went on to hire the band that was playing at that event for our wedding,’ said Lynsey.

‘For Christmas I had bought James the Marty McFly trainers which light up at the back, which he ended up wearing at that event and then to our wedding reception.’ 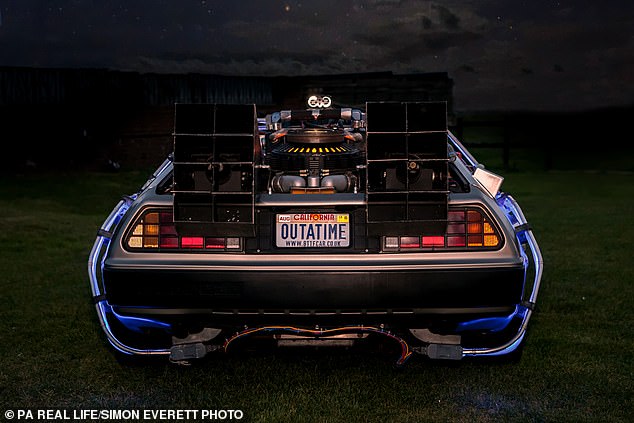 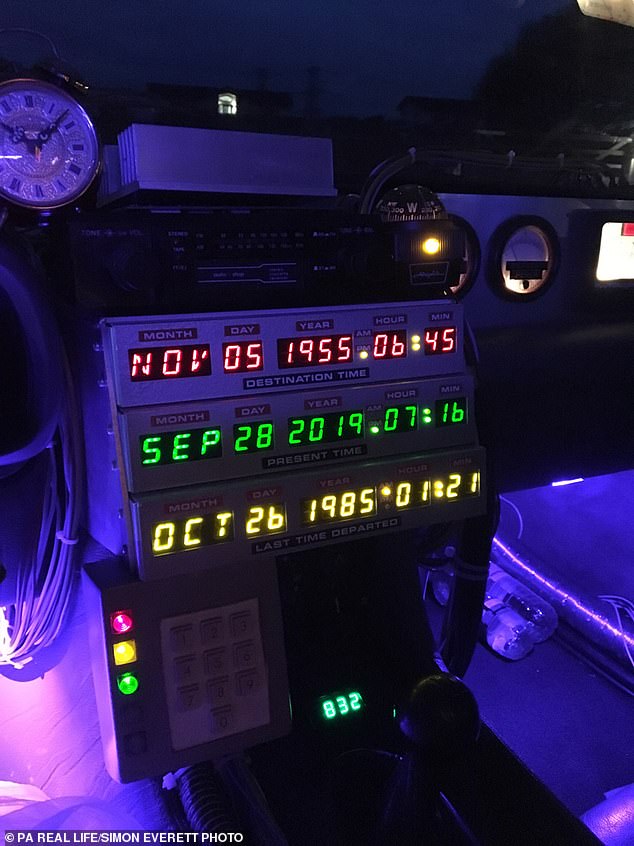 During the film Dr. Emmett L. Brown is able to travel in time by setting the dates on his time circuits 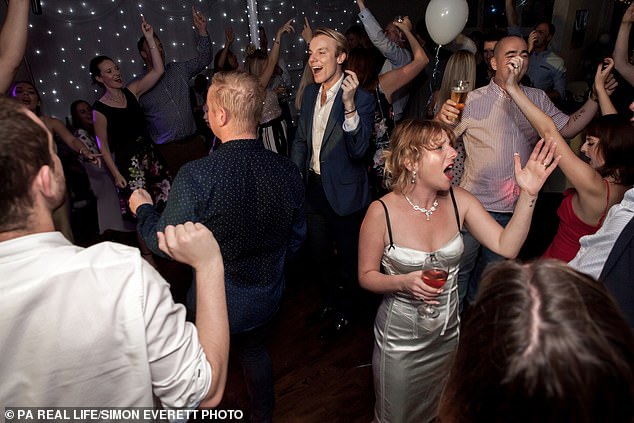 When Lynsey started wedding planning, she first considered a straight forward 80s-themed party for the do, but then decided on a Back To The Future theme, as the film had played such a significant role in their relationship.

She said: ‘I started thinking we could do the Enchantment Under the Sea ball, which was a school dance held at Hill Valley High School, where Marty McFly’s parents met.

‘I knew I wanted the band Popgun that had played at the theme night and I found out I could get hold of an original DeLorean, signed by the whole cast, which I wanted to keep as a surprise for James.

‘It was by luck that the time machine was based in Kent and happened to be available when we needed it. Unfortunately, I didn’t manage to keep it a secret, but James was delighted when he found out.

‘I would have loved to have had a message from Michael J Fox, too, but unfortunately that bit wasn’t possible.

‘We had Enchantment Under the Sea ball invites, posters and a banner, tablecloths and Hill Valley High table confetti.

‘The band had Back to the Future style outfits on and our first dance was to Huey Lewis and the News’s The Power of Love. 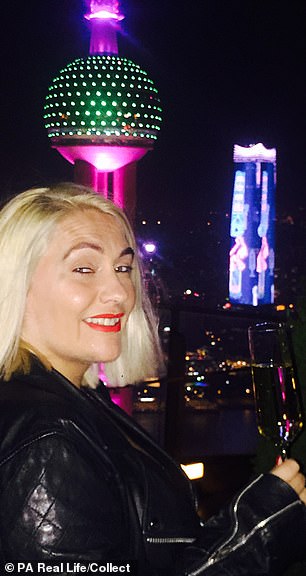 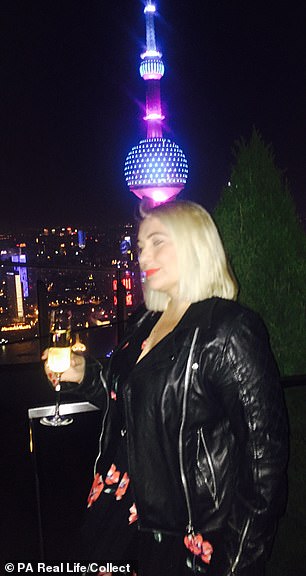 James proposed to Lynsey in April 2018 at the top of the rooftop bar of the Ritz Carlton hotel, while they were on holiday in Shanghai, China 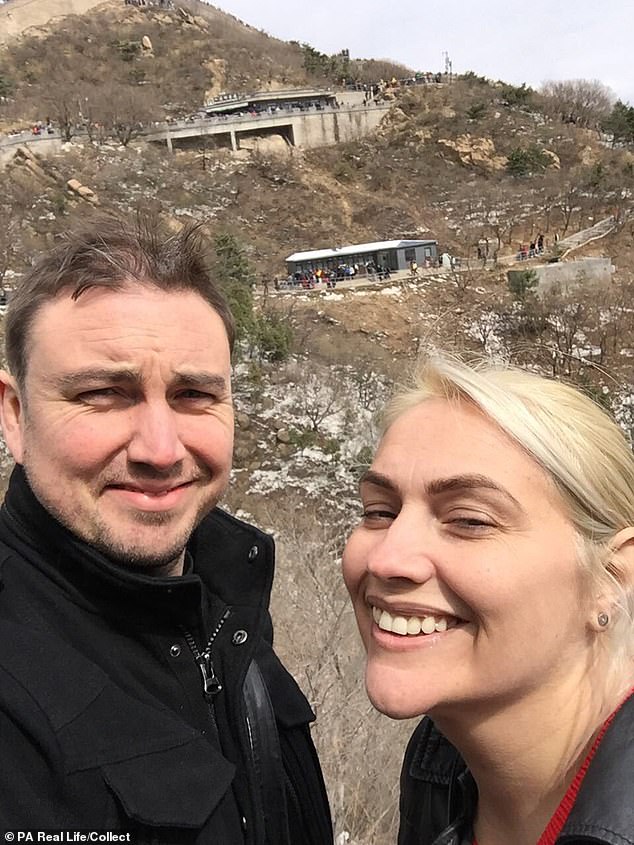 The couple spent a total £30,000 for their combined wedding and reception before going on a 12 night honeymoon in the Maldives and Dubai

‘We had an 80s buffet with cocktail sausages on sticks, vol au vents and party rings and a cocktail menu with themed drinks like the Marty Mojito, Sex in a DeLorean and Clock Tower Cosmo.’

But the pièce de résistance for Lynsey – who had an Enchantment Ball banner made by her friend Susan Higgs, who runs a graphic design business, and also scoured eBay for props – was undoubtedly their wedding cake.

She said: ‘My brother Lee is also a big fan of the film, so he let us use his toy DeLorean and we had that crashing into the cake.

‘We wore traditional dress to the party – me in a white wedding dress and James in a suit – but he also wore his themed shoes. His mum asked him if he was going to take them off at any point but he didn’t!’

With a staggering £10,000 of the total £30,000 cost of their combined wedding, reception and 12 night honeymoon in the Maldives and Dubai, going on the party, it was a lavish affair.

James said: ‘I first watched the film when I was nine or 10 at a children’s summer club.

‘I love it because it’s so cleverly done. They’ve managed to make a sci-fi film about time travel and different versions of the future, without it being complicated or taking itself too seriously. The soundtrack is not bad either!

‘When I found out Lynsey had got the DeLorean I was so excited, I just wish I could have taken it for a spin.

‘The original plan was to have a themed ‘save the date’ card, then it grew from there – snowballing until we had a DeLorean pulling up outside.

‘It was the best day ever. Dancing to Popgun with my wife and friends – you couldn’t beat it.’

The 1980s American sci-fi comedy which first led to the couple bonding follows the adventures of the time-travelling high school student Marty McFly and the scientist Dr. Emmett L. Brown.