Grocery prices will climb in the wake of the Victorian floods, intensifying cost-of-living pressures as Treasurer Jim Chalmers warns that the impact of this latest natural disaster on the federal budget will be substantial.

The total cost to the economy will not be known until after the waters have receded, but a leading economist predicts inflation could surpass a 32-year high of 8 per cent by the end of the year. 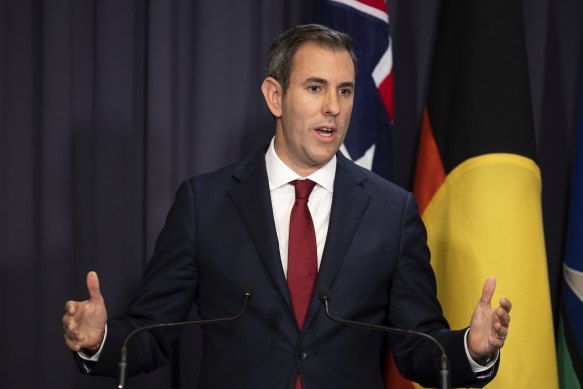 Treasurer Jim Chalmers on Monday said the government will have to factor in the cost of the rebuilding efforts and disaster recovery payments, as well as the broader economic disruption.

“Obviously, when you’re talking about absolutely prime agricultural land, making some of the biggest contributions to our grocery aisles, there will be an impact, and it will be a substantial impact I fear,” he said on Monday.

“I think Australians do need to brace for a cost-of-living impact from these floods. These are likely to push up the cost of living when Australians are already under the pump.”

The summer floods were expected to cost the federal government more than $6 billion in disaster relief and recovery works. The latest floods will also cost the government billions of dollars.

The northern Victoria region hit by this month’s deluge is home to more than 200,000 people and covers some of the most important beef, lamb, fruit and vegetable growing land in the Murray-Darling basin.

It also produces almost a quarter of the nation’s milk supply.

In March, the federal Treasury estimated the floods that hit northern NSW and Queensland would reduce national GDP by 0.5 percentage points in the short term before being offset as communities were rebuilt.

The most obvious impact outside of the affected communities was on the price of fruit and vegetables. Iceberg lettuce hit $11 a head as vegetable prices jumped by almost 8 per cent through the June quarter.

The Reserve Bank’s most recent forecast predicted inflation will peak at 7.75 per cent in the December quarter, before starting to fall through 2023.

He said the economic growth could take a hit of 0.1-0.2 percentage points though this would be offset as communities rebuilt their flood-hit infrastructure in coming quarters.

“The budgetary impact is likely to be a few billion dollars depending on how much the federal government ultimately decides on spending in terms of flood relief and rebuilding but it’s unlikely to be enough to significantly alter the size of the federal budget deficit to be updated next week,” he said.

Victoria had been on track for a record-breaking winter crop until the floods hit, Rabobank agricultural analyst Dennis Voznesenski said, with many low-lying crops in central and northern Victoria underwater.

“We are going to have to wait for all the forecast rainfall to come through and for waters to recede to see the full impact of the rains on production,” he said. “The unfavourable conditions mean
harvest is likely to be drawn out into January.”

Chalmers said it was premature to put a dollar figure on the cost of the floods, but the full price will be central to the government’s thinking ahead of the next budget in May next year.

“But our commitment to Australians is that we will do the right thing by them, we will help them rebuild.”

Emergency Management Minister Murray Watt said the government is already providing financial assistance, including through the 13-week disaster recovery allowance, the one-off $1000 disaster recovery payment, as well as starting the process of creating a Disaster Ready Fund to invest in mitigation.

“This is obviously a really major flood that we’re seeing across Victoria. And it’s going to require a lot of assistance from all levels of government,” he said on 3AW radio on Monday.