The Auditor-General has suggested ministers, their staff and bureaucrats should be banned from using encrypted communications platforms like WhatsApp and Signal because they do not constitute proper records. 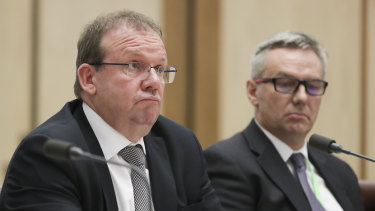 Auditor-General Grant Hehir says parliament and ministers need to confront the question of whether public servants should use WhatsApp.Credit:Alex Ellinghausen

While he believed auditors had the legal powers to access messages, it was often hard in practice. There was a tension between the Archives Act which requires public information to be maintained and the use of communication channels that "don't automatically maintain the record and make it inaccessible".

"If you send a text message to someone saying let's do this, then it's a record which should be maintained," Mr Hehir said.

"Rather than being neatly filed back in the day where it would end up in a compactor and whatever, these days … we're having to take terabytes of Outlook from entities, by name, and bring it into our forensic analysis systems … because so much is unstructured and free text," she said.

Mr Hehir said the extent auditors were having to dive into bureaucratic email accounts had led them to question how far they needed to start examining text messages.

Texts were relatively easy to access but other technologies could be more challenging depending what each user's settings were.

The issue of whether WhatsApp and other encrypted messages are maintained and can be accessed under Freedom of Information laws has been regularly canvassed in Senate estimates hearings.

In October 2019, officials from the Department of Prime Minister and Cabinet told senators they used WhatsApp to communicate with the Prime Minister's office and Signal to talk with departmental colleagues, but didn't know what settings they had in place relating to automatic deletion of messages. But by October this year, one of the same officials said, "I don't use WhatsApp anymore for that purpose."