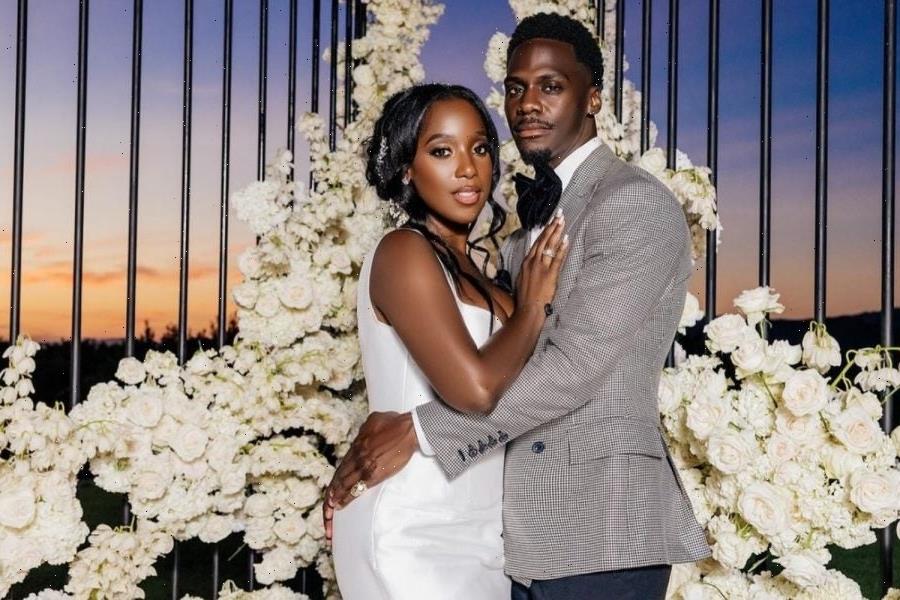 Going through significant life changes all at once can fill some people with anxiety, but for actress Ashley Blaine Featherson-Jenkins, she’s feeling nothing but blessed.

“Honestly, I feel like I’m in the prime of my life,” she tells ESSENCE. “It really feels like in so many ways that my life is really just getting started.”

That feeling makes sense, as Featherson-Jenkins just married longtime beau Darroll Jenkins in Santa Susana, California in September. “Our wedding was just a gorgeous, beautiful day,” she says of the dreamy nuptials. “It was just a day that you could tell was just absolutely anointed, and it just was our dream come true. It really, really was.”

Despite their long history (they met in 2010), she says that married life comes with a completely different energy than what the couple has been used to over the years, and she absolutely loves it.

“I think it’s a little bit of a myth when people are like, ‘Nothing changes,’” she says. “There is a safety and a security, and an excitement about the life that you’re going to build together in a way that’s different, I think than when you’re just engaged or when you’re just boyfriend and girlfriend. There’s definitely been an energy shift, but in the best way possible.”

Only four weeks since they jumped the broom, Featherson-Jenkins was still beaming when talking about the nuptials, from the altar that looked like “the opening to heaven’s gate,” to her favorite moment being Darroll dancing down the aisle. There were so many personal touches captured, including the couple taking a shot “for the road” at the altar and having fellow actress Aisha Hinds officiate the ceremony.

“Aisha’s one of my best friends. So I think some people maybe didn’t know that because people are like, ‘Wait, did she have Hen from 9-1-1?’ she jokes. “Aisha, just the way she opened the ceremony was absolutely breathtaking. It was her quote unquote script that she had that was perfectly tailored to Darroll and I. There was so much thought, so much love infused in it. It was such a beautiful moment to have one of my nearest and dearest friends, someone who’s seen Darroll and I go through all the ups and downs to get to this journey, be right there with us. We formed this kind of trifecta up there and it was really beautiful.”

Back from their honeymoon in the Maldives, Featherson-Jenkins is also embracing another big change in her life, which is the recent premiere of the final season of Netflix’s Dear White People, which she plays the character Joelle on. Though it’s her first starring TV role, she’s not as emotional about walking away from the series after 40 episodes as she thought she would be.

She adds, “I think it’s very kismet what’s happening in my life, because I’m showing full gratitude for what was, that I can be very excited about what will be. And I feel like something great is coming, and I’m excited to journey on to whatever’s next for me, the next project and projects, with Dear White People under my wings, for lack of a better term.”

And she’s walking away from the series on a high note. Literally. Season 4 is unlike any season before it, as it’s a ’90s-themed musical. The actress studied musical theater, so the opportunity to wrap things up in this way was something she was overjoyed about.

“To be on a show that was a complete, straight 30-minute comedy, and to wake up one day and Justin [Simien]’s like, ‘Hey FYI, the fourth season’s fully going to be a musical,’ that’s just a blessing,” she says. “Like I said, for me specifically, I internalized it as that. I internalized it as, ‘Wow, God, you’re giving me another platform to display my gifts to the world,’ And I didn’t have to go anywhere to do it. He created space for it, right where I already was, and with the character I already loved so much.”

But as much as she loved the shift, she is not surprised that there are some people who weren’t as excited about the series ending in such a way. Nevertheless, she has a positive outlook about it all.

“I think people have a lot of opinions about it, and I think that it’s one of those things… Coming from musical theater, I already know that musicals are either for you or they’re not,” she says. “It’s a very specific form of storytelling. You have to really understand. It has to organically resonate with you, and it doesn’t do that for everybody. So I knew that going into it, but that’s not why you make art. You make art and you just put it out there, and if it reaches one person, if it touches one person, if it inspires one person, that’s enough.”

As for what her future holds, Featherson-Jenkins is looking forward to doing more TV, getting into more movies, writing a book, starting a podcast, and building a family with Darroll. When that will happen, she’s not sure of, but she’s open to whatever comes her way after watching all the positive change that has come in her life, career wise and personally.