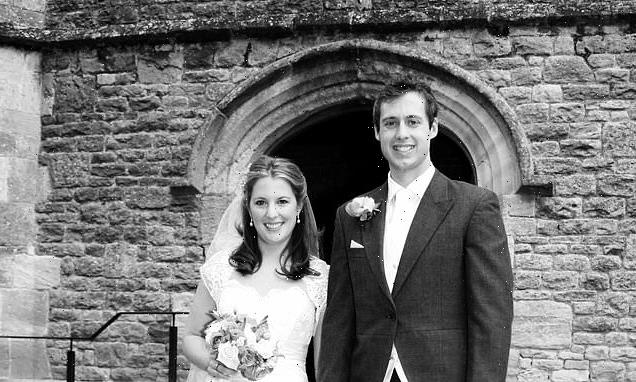 ‘As my husband’s life slipped away, I felt a presence in the room’

People are stunned when Louise Blyth describes her husband George’s death as a miracle. But, she tells Eimear O’Hagan, in their darkest hour, she’s adamant that something spiritual helped them both let go 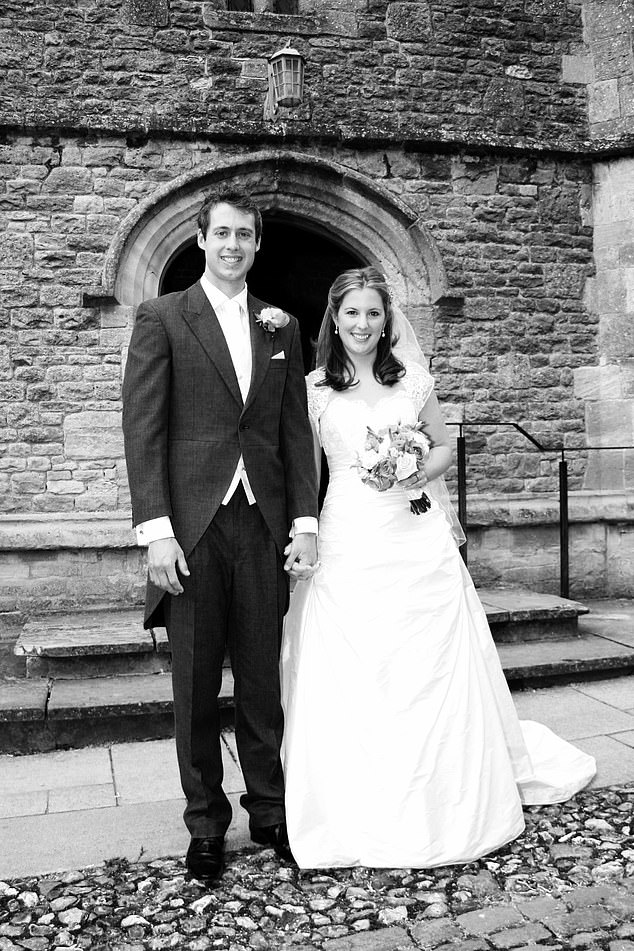 Louise and George on their wedding day, 2011

Louise Blyth was just 33 when, in 2015, her world was turned upside down by the news that her 34-year-old husband George – who she had met at work and married four years previously – had stage 4 bowel cancer which had spread to his liver. ‘His was described as “the worst of worst-case scenarios”. He was given just a seven per cent chance of living five years,’ remembers Louise.

‘George was a very positive, dynamic person and he was determined he’d get better. It was very typical of him not to accept a horrific statistic like that. Did I share his belief he could survive this? I believed in George, I really did – if anyone could overcome adversity it was him. And yet I knew in my heart that the prospect of him overcoming this was incredibly difficult.

I was just absolutely devastated.’ George embarked on a gruelling programme of treatment, with 12 rounds of chemotherapy, four weeks of radiotherapy and finally surgery to remove a section of his liver. But October 2016 brought the devastating news that the cancer had spread.

‘The word “terminal” was never used but now doctors were talking about him “living with” cancer. It was unspoken, but we knew George was going to die. ‘I felt numb at first and then, as it sank in, I felt angry, jealous of people not living this nightmare, scared. It was a point in my life of complete darkness.’

Within weeks of that shattering news, George was admitted to hospital as his pain and symptoms worsened and it was then, Louise says, that together they went on a life-changing journey. ‘I felt utterly backed into a corner, realising there was no way out of this. It was then I thought, I don’t even know if God is real but that is the only route left now. I need to ask for his help.’

Before then Louise was, by her own admission, not someone who had faith. ‘Religion wasn’t a part of my life, beyond traditions like Christmas and harvest festival. My family didn’t pray; some are actually atheists. George and I had married in a church, but only because it was what you do. Neither of us was really sure if God existed.

‘But in desperation, knowing George was slipping away from me, I began to reach out to God. My prayers were simply for help; I was too gripped by trauma and sadness to properly express what I wanted. It was more like a primal plea from deep within me.

‘By now George was in incredible pain. He couldn’t sleep, eat or drink, he was being sick and he was terrified. He couldn’t be alone andI, or a family member, was with him day and night. He was in a place of total horror and fear.’

When a family friend offered to introduce Louise to an American woman named Brianna, who belonged to a healing group, Louise agreed. ‘She came to the hospital and prayed with us both, as well as anointing George with oil. Before all this, if someone had described that scene to me, I’d have thought, “How crazy.” I remember thinking, “I can’t believe I’m here, praying with a stranger over my dying husband. This isn’t me.” It was so surreal.

‘I prayed myself, too, after Brianna left, writing down my words to God – letters I still have today. I asked him why he was doing this, taking George away from me and from our sons Charlie and Jamie [aged three and 18 months at the time]. I asked him to make George happy and take his pain away. And I prayed for him to protect me and love me. I poured my heart out in a way I had never done before.’

What Louise describes next will, inevitably, provoke some scepticism. And she is the first to agree that her past self would have been the greatest sceptic of all. ‘In that hospital room, I witnessed a miracle. I know that sounds bonkers, but what I saw happen was miraculous; there is no other word for it. ‘George wasn’t healed. He didn’t get out of his bed. Instead, I saw the miracle of my husband’s life coming to an end in perfect peace.

‘Overnight, he was transformed from someone in agony, gripped by fear, to being pain-free and serene, and when you touched him, you could feel a force within him. It felt supernatural; we had summoned something into his room and it was overwhelming but it wasn’t frightening. ‘He had come to a belief in an afterlife and so had I, which neither of us had been sure about before, because we’d both been shown there are forces greater and wider than can ever be described.’

On 18 November 2016, George passed away aged just 34 – and, at his request, he was alone when he died. ‘He knew he was going to die and he told me, “I’m going to do it by myself.” He wasn’t afraid any more. I kissed him goodbye and left the hospital, knowing I wouldn’t see him alive again,’ says Louise, tears falling down her face as she speaks quietly. 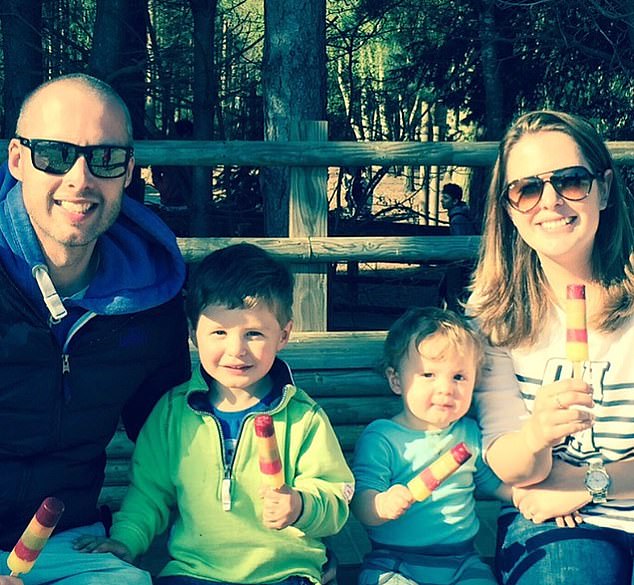 George, Louise and their sons Charlie and Jamie, 2016

‘Lying in bed that night I wept uncontrollably. Then I felt a presence in the room with me, as if someone was stroking my hair, soothing me. I know it sounds mad, but I felt like I was in a beautiful cocoon of love and peace, and I just knew George had left this world. ‘I fell asleep for a few hours, and as dawn broke, the hospital called with the news I already knew. George was gone. But after the horrors he had suffered, I knew he had died a good and beautiful death.’

Louise is pragmatic enough to acknowledge there will be those who’ll say she has romanticised George’s death to comfort herself. ‘I understand that, it’s not the norm to talk about “dying well”. And there were parts of those final weeks and days that were just awful. But it was a time that was as sad as it was happy, as beautiful as it was hideous, as painful as it was perfect. Isn’t that just like life – a mash-up of emotions, of light and dark? 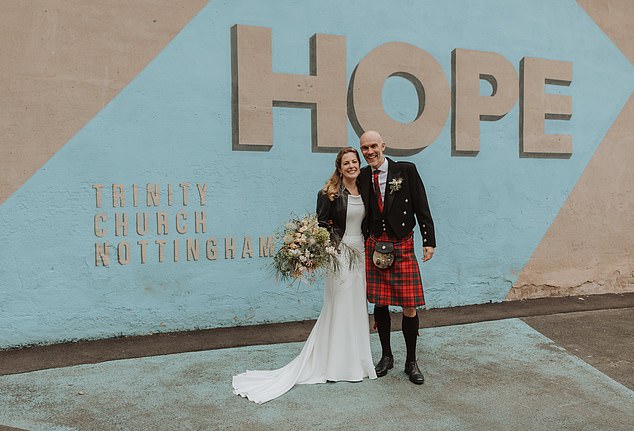 Louise with second husband Colin at their wedding last year

So why should death be any different?’ Louise has reflected on what life might have been like for her in the aftermath of George’s death, had she not found her faith. ‘I know the children would have kept me going, and of course faith isn’t a prerequisite of forging a life as a widow – everyone finds their own way to peace and acceptance. But faith was my way.

‘Prayer, becoming a member of a church, knowing God was with me… it all propelled me forward because I knew something bigger was guiding me. And my newfound belief in heaven was such a comfort, knowing that one day I will see George again.’ Louise’s conviction that she will be reunited with George is matched by her certainty he would approve of her remarrying. ‘I know, because we spoke about it before his death, when I confided in him that I was scared of being alone. He told me, “You’ll meet someone else. And they need to be a father to the boys, because I’m not going to be here to be their dad,”’ Louise says, her voice breaking with emotion.

On a beautiful late summer’s day last September, Louise married her second husband Colin, 47, a BBC journalist. As the couple exchanged vows, so began a new chapter in both Louise’s story and that of her boys, now eight and six.

‘Loving again after being widowed is such an individual experience. Since George died, I’ve made many friends in the widowed community through social media, many of whom have found their way to new love through different means and on different paths,’ says Louise. ‘For me personally, though, my faith helped me to continue to see the beauty of life, and treasure it, which led me, in time, to wanting to love again. And, ultimately, that brought me to Colin.’

After the couple ‘matched’ on a dating app specifically for Christians in early 2019, they met in person that July, and Louise says the rest ‘is history’. ‘He moved in at the beginning of the first lockdown last year, because he lived in Manchester and I was in Nottinghamshire with the boys, and proposed last August.

‘We married a month later because new rules restricting numbers at weddings were being introduced, and we wanted to have our 30 invited guests there. I’m so grateful I’ve never had to wonder if George would be OK with this,’ continues Louise. ‘I know I have his blessing. And I’ve come to understand I can love two men fully. My love for Colin doesn’t diminish what George and I had. I wear the rings Colin gave me, and am planning to have my rings from George turned into another piece of jewellery so I can always have them with me.’

Louise agrees it takes a special man to marry a widow and join a family that has been through such loss. ‘Colin is that man. He is so mature and accepting, never intimidated by my previous love story or the photos and conversations about George in our home. He’s not here to fill George’s shoes, he wears his own. He is his own person and that’s one of the reasons I love him.’

With December marking the anniversary of both George’s original diagnosis and his funeral, it is a month of painful memories for Louise, yet she is buoyed by her faith and love for Colin and her children.

‘I’ve been to a place of absolute darkness in my life, and now I am in a place of light and love,’ she says. ‘My heart was crushed, but I found my way to the beauty of living again, and for that I am so grateful.’