The average runner will never run as fast as Eliud Kipchoge – no one can. When Eliud runs he floats gracefully along not looking like he’s even breathing hard – which is inspiring but also a little annoying given so many runners, like me, look anything but graceful when we run.

The legendary Kenyan marathoner broke the magical 2hr barrier in Vienna last weekend, running the marathon in 1hr 59 min 40 seconds. Yes it was under controlled conditions and won’t be officially recognised by the IAAF, with shoes designed specifically for him and a rotating roster of elite pacers to keep him running each kilometre at an eye-watering 2min 50 second pace as well as a  pace car pointing a laser light back at the road to keep them on target. But he still had to run 42.195km at that pace and it was absolutely stunning to watch. 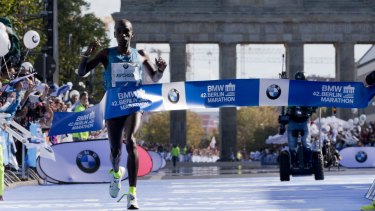 Kipchoge gives a masterclass in running. The man is grace personified and there is so much we can learn from him about running. A man who is by any standard the best marathoner in a generation has lessons for us all. We can’t all be 2hr marathoners but the lessons are there if we choose to look.

Firstly his stride – it's pure perfection. Like so many of the best he lifts his legs high, his heals almost tapping his glutes which helps propel him. He stands upright, doesn’t slouch and looks forward.

What’s also interesting about him as an athlete in a world of high tech gadgetry and specially calorie controlled diets is the simplicity to his training. Yes, he runs a ridiculous amount of kilometres each week, far more than most runners, but that’s the difference between elite runners and the average runner. He reportedly runs 40 km a few times a week, but around training his diet and lifestyle are simple.

Don’t just run at the same pace – do some speed work. Not only does it break up the monotony … it helps make you stronger and faster.

He eats simply, no processed foods, and trains with the same group of runners on the dirt roads near his home in Kenya. His reliance on a close-knit support crew he can discuss running with is a lesson for all runners. You have to have your crew you can talk running with. Even the best still do that – rely on the advice of others to help make improvements and achieve long held goals.

Kipchoge gave some tips after the London marathon in 2016 which included important things like keep a diary. Write everything down. Each run, how it felt, what you ate before it. You can learn from each run – even the bad ones. This is probably the most important part of his training that applies to all runners. Write, learn, digest and adjust where needed. Sometimes it's what you ate for breakfast or the time you ate it that makes the difference.

Hit the hills – even on a flat course leg strength is everything if you want to finish. You need strength at the end to get you over the line. Kipchoge does plenty of that. For this race he reportedly spent time in the gym, something which was not previously part of his approach, and it's clear that made the difference in Vienna.

Don’t just run at the same pace – do some speed work. Not only does it break up the monotony of the week but it helps make you stronger and faster. Watching him in Vienna, he also stands tall and relaxed. His shoulders are down and hands sit loosely in front of him. Staying loose, relaxed and not panicking when it goes bad in a race, which sometimes happens, is key to success.

When Kipchoge races he sits back in the pack waiting for his time to move biding his time, conserving his energy and displaying a level of patience I am still yet to master on my runs. Patience has never been my forte but watching Eliud run over the past few years I’ve learnt it has to be. It has been the main thing I have worked on – and it has worked.

Most runners will never run like Kipchoge. What we can do though is learn from the master. Do the miles, eat well, stay relaxed and don’t panic when things get tough. Most of all when you do fail to meet your target, as Kipchoge did in Italy two years ago, regroup, make new plans and try again.

Jane Hollman is an HR constulant, sports writer and runner.