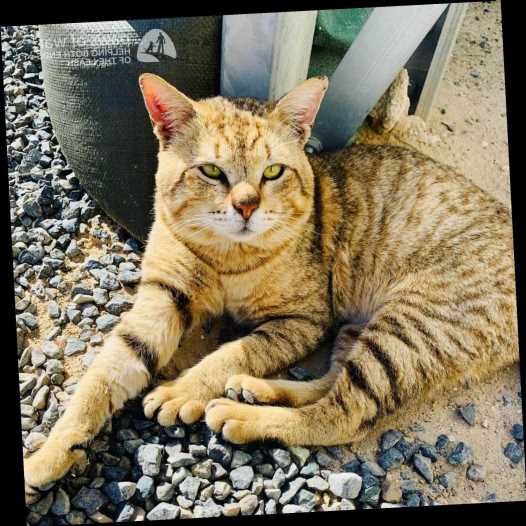 After saving Bubba the cat during her deployment in the Middle East, Army Sergeant Rode is looking for a little help rescuing the animal again.

According to a release from Paws of War, Sgt. Rode first met Bubba when he was a scared, injured, and lonely stray that was too afraid to approach anyone. Sgt. Rode could tell the feline needed help, so she started leaving out food for the cat — eventually, Sgt. Rode was able to gain Bubba's trust.

Once Bubba warmed to Sgt. Rode's affectionate touch, he let her nurse his numerous wounds from life on the street. The pair became inseparable while Sgt. Rode was overseas.

"Bubba is such a wonderful cat, and he greets me every time he sees me and purrs loudly whenever I pet him," Sgt. Rode shared in a statement.

Sgt. Rode recently received orders to return home, leaving her and Bubba's future uncertain. She is committed to bringing Bubba back to the U.S. to be her forever pet since she can't bear the thought of abandoning her feline friend.

"I have formed such a great bond with him, it took me so long to gain his trust, and I can't fathom the thought of leaving him behind once I get deployed back to the U.S," Sgt. Rode added. "He has been a wonderful companion and provides me so much comfort when I need it most. I could not leave this cat behind to suffer and die. He trusts me, and I won't let him down." To adopt Bubba and bring him back to her home, Sgt. Rode needs to cover the cat's travel expenses. Flying a rescue animal internationally can be a costly and time-consuming process to handle alone. Luckily, Sgt. Rode has the help of Paws of War, a nonprofit that provides assistance and a wide range of programs to aid active, retired, and disabled military members and their pets.

"This is a story you can't help but to love and want to get behind," Dereck Cartright, a disabled veteran who is the stateside logistics coordinator at Paws of War, said in the nonprofit's release. "Sgt. Rode saved Bubba, but there's only so much she can do on her own"

Paws of War is helping Sgt. Rode with the logistics required to get Bubba to the U.S. and set up a fundraiser to help her cover the costs of transporting an animal internationally. The organization is hopeful that with their efforts and the kindness of other animal lovers, Sgt. Rode and Bubba will be together stateside soon.

To learn more about Sgt. Rode and Bubba, and support their mission to remain together, visit the pair's Paws of War page.